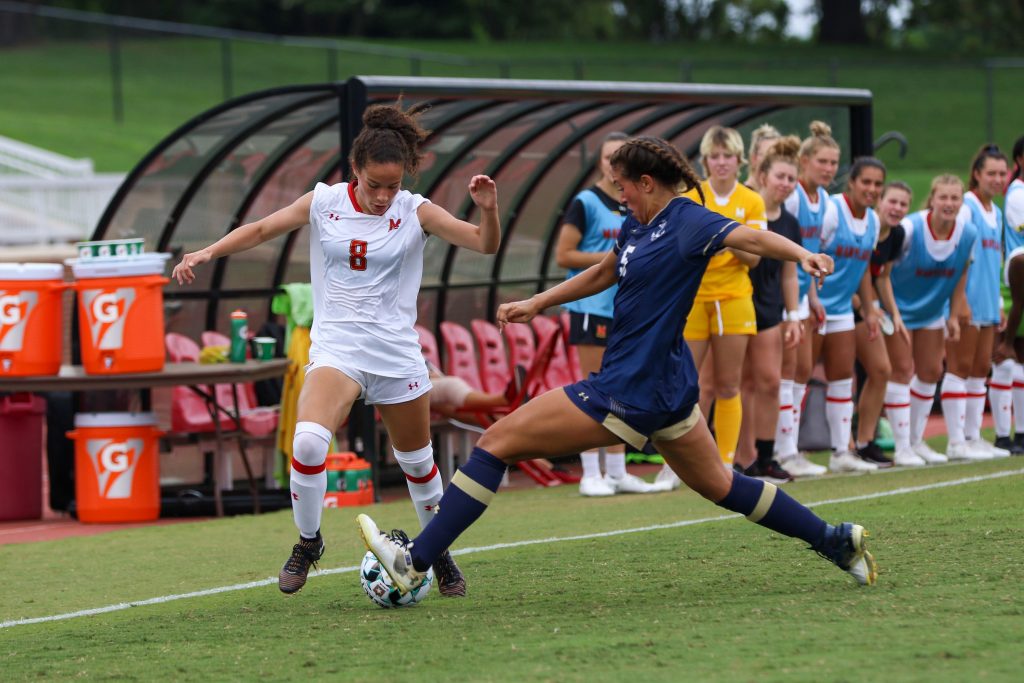 Maryland women's soccer's Toni Domingos dribbles past a defender during the Terps' 3-1 loss to Navy on Aug. 29, 2021. (Cam Andrews/The Diamondback)

Maryland women’s soccer couldn’t have asked for a better start.

Just 45 seconds in, freshman Toni Domingos found Mikayla Dayes, who beat multiple Navy defenders on the outside of the box, before firing her first goal of the season into the bottom corner.

However, the Terps struggled to capitalize on their ideal start, conceding an equalizer before halftime. Two second half goals sunk their chances, handing coach Ray Leone’s squad their first loss of the season, 3-1.

“Yeah, I mean, it was a great start,” Leone said. “I think that’s something our team’s got to get better at, when one goes in, they’re not automatically going to come. You got to play as if it’s zeros and we don’t think we did.”

After Maryland’s early goal, the Midshipmen tied the game with their first shot in the 33rd minute. Chloe Dawson beat her defender and put in a cross that found Jeana Freeman, who finished from six yards out past a hopeless Liz Brucia.

The Terps headed into halftime tied despite outshooting Navy seven to three in the opening period.

Navy eventually took the lead in the 52nd minute after Caitlin Doran took advantage of a mistake by Emily McNesby, running past the defender and scoring past Brucia.

Maryland narrowly made an instant response, with Loren Sefcik hitting the post before Domingos put another shot just by the post.While Leone was disappointed the Terps failed to capitalize, he was happy with their response.

“[The response] was huge, really good,” Leone said. “That was a really good sign for our team, you know, to see that response and go end to end. Holy mackerel, you know. If you get the goal all of the sudden the game might totally flip.”

The Terps would regret not capitalizing on those opportunities, as Navy would score its third goal in the 62nd minute. Dawson notched her second assist, finding Alexa Riddle with a through ball. The forward’s first time left-footed finish doubled the Midshipmen’s lead, putting Maryland behind by multiple goals for the first time this season.

The Terps continued to push forward throughout the match, but couldn’t finish any of its 12 second-half shots and were reduced to 10 players in the 87th minute, after Domingos was shown her second yellow card.

Despite outshooting the Midshipmen 19-11, Maryland failed to find the back of the net after the first minute.

“[We] just couldn’t get a goal,” Leone said. “I mean 19 shots is enough to score two and we didn’t get that done, but the effort was there.”

When the final whistle blew, it signified Navy’s first-ever win at Ludwig Field, with the Terps winning the first eight meetings on its home turf.

While Maryland will be disappointed with its first loss of the season, the Terps will hope to learn a lot from the game and get positive results next week against George Washington and Saint Joseph’s.

“[The loss] is obviously very disappointing,” Adalee Broadbent said. “But we know that by our response we generated a lot of chances and we definitely could have come back from it. So that’s a positive thing that we can take away from the game and we just have to put this one in the rearview mirror and move forward.”