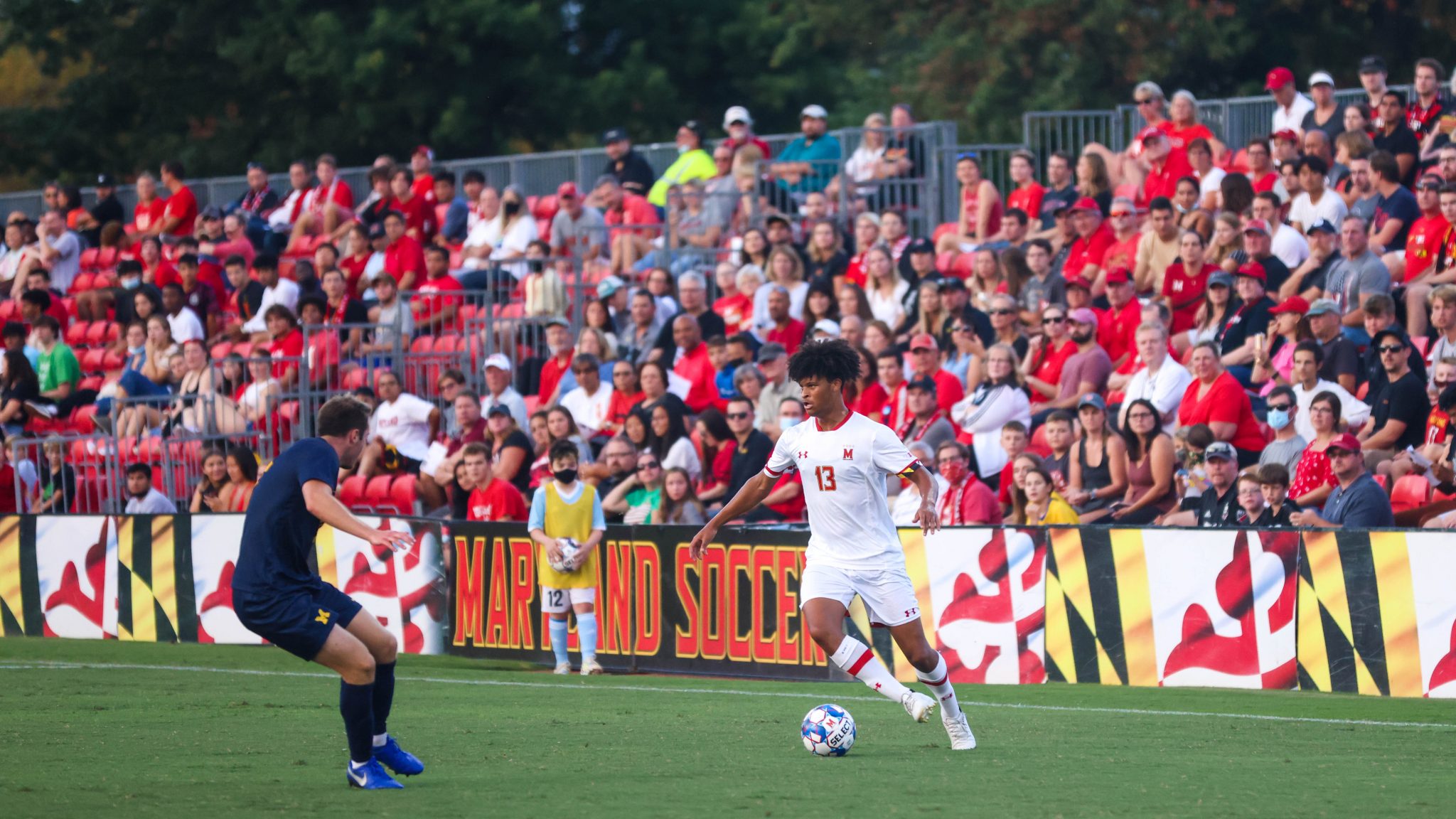 The Terps had been awaiting this moment all night.

Idling diagonal from the soccer ball, Joshua Bolma tapped his feet into the ground and took his advance to his ensuing shot. Bolma launched it, curving the ball to the left and just beyond the futile attempt by the keeper as it netted in the corner.

“I just kind of called for it and said I wanted to hit [the free kick],” Bolma said. “I got to appreciate Hunter [George] for letting me take it.”

After scoring two goals in a 10-minute span, Maryland captured victory in its conference opener, 2-1.

156 days later, coach Sasho Cirovski’s squad clashed with the Michigan Wolverines in its conference opener. And after sharpening their claws with a formidable non-conference schedule, they looked to put up a tough fight against the Wolverines.

At the dawn of the matchup, the Terps came out a bit inconsistent on offense and labored largely at their own end in the first half. Between skirmishes at their end, Maryland took a few aggressive pushes that came up empty.

“I thought we controlled the tempo of the game in the first half but had nothing to show for it,” Cirovski said. “We weren’t very dangerous in the final third.”

Jacen Russell-Rowe took the role as the protagonist of a few of these advances, nabbing two high shot attempts after freeing himself from the swarming Wolverines.

“Jacen is a great finisher,” Cirovski said. “… he’s just still getting his soccer fitness up and his timing and rhythm.”

But Michigan largely won the early possession battle and played keep-away while stalling on offense themselves. Despite that, Maryland took their chances and managed to even the possession scales as the first half ended.

Bolma’s aforementioned static strike set the tone early for what would still be a contentious half. At least, that was likely the ideal script for the Wolverines.

But the Terps tried to put that narrative to sleep quickly.

Justin Harris launched the ball just shy of the penalty stripe and netted with an assist of a favorable bounce into the goal. It was 2-0 Maryland in the 63rd minute and Harris became the ninth Terp to score a goal this season.

The goal was also the junior Harris’ first career net, a milestone that his team expressed their joy at.

“One of the things that warms my heart on the night was Justin Harris coming in and having a wonderful performance,” Cirovski said.

Michigan kept the matchup physical as each team fought to keep their position. Both teams earned yellow cards in the second half. But as Maryland snuck on several substitute players on the field, the Wolverines tested their vulnerability.

Under pressure, they cracked.

Michigan forward Derick Broche snuck in a goal in the 72nd minute, keeping the match close and Wolverines’ pride intact.

Pressuring Michigan on several shots, the Wolverines retreated and fought to keep their ground as the minutes ticked off. The Terps’ rival made one last late push with the help of a corner kick, but it came up short.

Maryland cruised the rest of the way to advance to 5-1 on the season.

“Your greatest glory is not never falling but rising every time you fall,” Cirovski said.“We don’t like to ever lose two in a row. We challenged the guys to rise and they rose.”