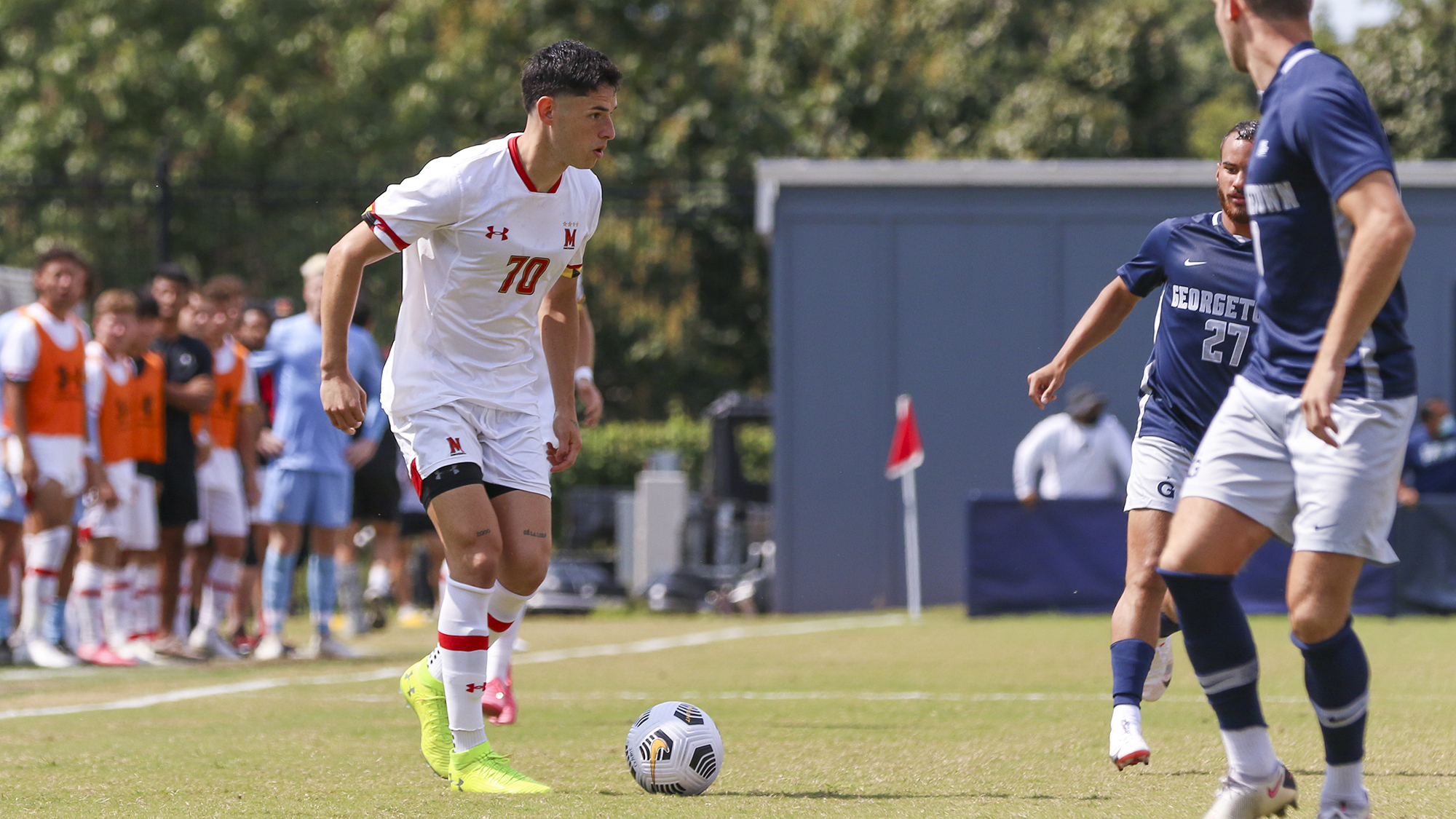 Brayan Padilla moves the ball down the field during Maryland men’s soccer’s 1-0 loss to Georgetown on Sept. 11, 2021. (Cam Andrews/The Diamondback)

Tasked with challenging Michigan on Friday, the Terps will begin their Big Ten schedule and road to a potential high seed in the conference tournament.

The Wolverines (3-2-1) have dropped games against then-No. 24 Duke and No. 12 New Hampshire, and tied their opener against Detroit Mercy. As such, it seems this conference opener is Maryland’s to lose.

With how the Terps performed before dropping their first game to No. 1 Georgetown, it’s easy to see how they have the potential to roll over the Big Ten. But the team took something away from their loss to the Hoyas.

“During the [Georgetown] week, we kind of focused too much on how we were going to prepare to defend them instead of focusing more to the strengths of our team,” Padilla said. “From now on, focusing more on our qualities and playing to our strengths would definitely benefit more to us.”

Channeling that confidence toward frightening Michigan into submission seems to be Maryland’s goal, especially given that the game will take place on its home turf.

The Terps are 5-0-2 at Ludwig Field since losing last season’s home opener and lead the country in average attendance so far this season.

“We are unbelievably grateful to have such a supportive and rabid fan base,” coach Sasho Cirovski said. “Friday night lights is a very special thing for Maryland soccer … The opening game of the Big Ten schedule adds a little extra juice to the match.”

Both Cirovski and defender Chris Rindov expect the Wolverines to come out swinging in the hostile environment. That starts with pressuring Maryland’s attack after a game in which it struggled mightily to achieve quality shot opportunities.

“We’re definitely expecting them to high press, try and put us on our back a little bit,” Rindov said. “Our focus will just be to make sure we outwork them and just do the best that we can … be more proactive rather than reactive to them.”

[No. 7 Maryland men’s soccer unable to score in frustrating loss to No. 1 Georgetown, 1-0]

While Maryland thrived in a challenging nonconference schedule, it won’t matter if the team doesn’t meet the challenge against its Big Ten rivals.

The Terps haven’t picked up more than four wins in their conference schedule since 2017. Their performance hasn’t met their expectations.

The road to overcoming that starts Friday.

“We have not been happy with how we have placed in the Big Ten over the last couple of seasons,” Cirovski said. “For us, it’s important to get off to a good start.”