No. 7 Maryland men’s soccer unable to score in frustrating loss to No. 1 Georgetown, 1-0 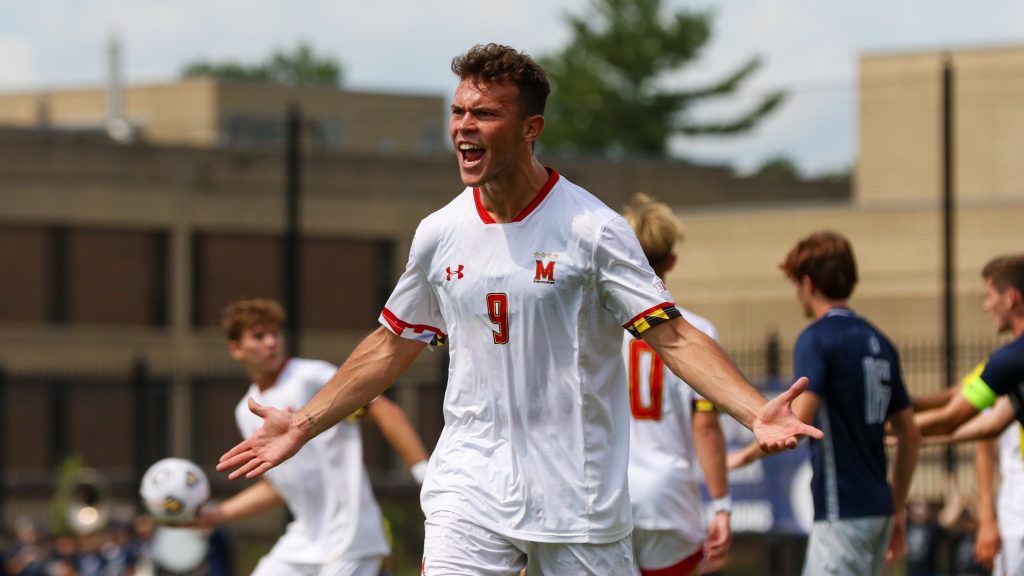 Justin Gielen protests after a goal is called back during Maryland men’s soccer’s 1-0 loss to No. 1 Georgetown on Sept. 11, 2021. (Cam Andrews/The Diamondback)

WASHINGTON — Jamie Lowell and the Maryland men’s soccer defense took punch after punch against the top-ranked team in the nation, wobbling and falling repeatedly as the match went on.

Withstanding over 20 shots, the Terps stayed in it to the final minutes but a surprisingly stifled offense led to a decisive 1-0 triumph by No. 1 Georgetown, propelled by an early goal.

There couldn’t be more of a challenging early-season test for Sasho Cirovski’s squad as they faced the Hoyas for their first road game of the fall 2021 campaign.

After a few unsuccessful advances by the Terps’ offense to the Hoyas’ goal, a quick stop-and-shoot by Georgetown’s Stefan Stojanovic pierced through the air to the left corner and netted in the sixth minute.

Just a few minutes in, and Maryland already faced one of its earliest deficits of the season.

“It’s very difficult to spot a high quality team an early goal if they’re all in place in a big game like this,” Cirovski said. “We knew box defending was going to be very important and Georgetown got the better of us on that first cross.”

[Maryland eyes the peak of men’s soccer as it faces No. 1 Georgetown]

Despite the early defensive breakdown, Cirovski’s squad played the next 20 or so minutes walling up the Hoyas from their goal. That came at the cost of complete frustration on offense with Alex Nitzl and Griffin Dillon earning yellow cards in the 31st minute.

“I gotta give credit to Georgetown, they really shut down our players,” midfielder Malcolm Johnston said. “Just wasn’t our night.”

The only good shot opportunity for the Terps came when Brett St. Martin found the ball from a free kick, making it a free-for-all near Georgetown’s goal. St. Martin took the shot and buried it, but Maryland was called for offside, erasing a golden chance before half.

Somehow, the Terps made it out of the half only down a single goal despite enduring 12 shots by the Hoyas and a barrage of four in the final minutes. If Maryland hoped to make it competitive in the second half, they needed a drastic change of play.

And for what changes Cirovski made, it didn’t pay dividends.

More offensive frustration highlighted the first 15 minutes of the second half as the Terps focused their efforts on keeping it close.

“We used a lot of our energy on the defensive side,” Johnston said. “We did have our little offensive spurt, I feel like we weren’t going at them with 100 percent.”

[In an unfamiliar position, Maryland men’s soccer fought back against Virginia]

Jacen Russell-Rowe had the only shot on goal for Maryland in the first half, but hadn’t been able to make much of an impact with fierce and long-winded efforts by Terp defenders.

“We had moments where we defended well … there was just a few too many lapses that gave them the opportunities to get that one early and then a few chances they had,” defender Chris Rindov said.

Good ball-handling and passing chemistry repeatedly placed the Hoyas into good scoring position, but Cirovski’s defenders blocked many of their shots in support of Lowell.

A late substitution of a trio of players including Brayan Padilla and Russell-Rowe served as the last gasp for a winded Maryland offense. But despite their efforts, the tape played the same old story from the rest of the matchup as the Terps were blanked by Georgetown, 1-0.

“The purpose of this game is to make us stronger, and that it will,” Cirovski said. “We strongly hope to have another shot at Georgetown at some point later this year.”