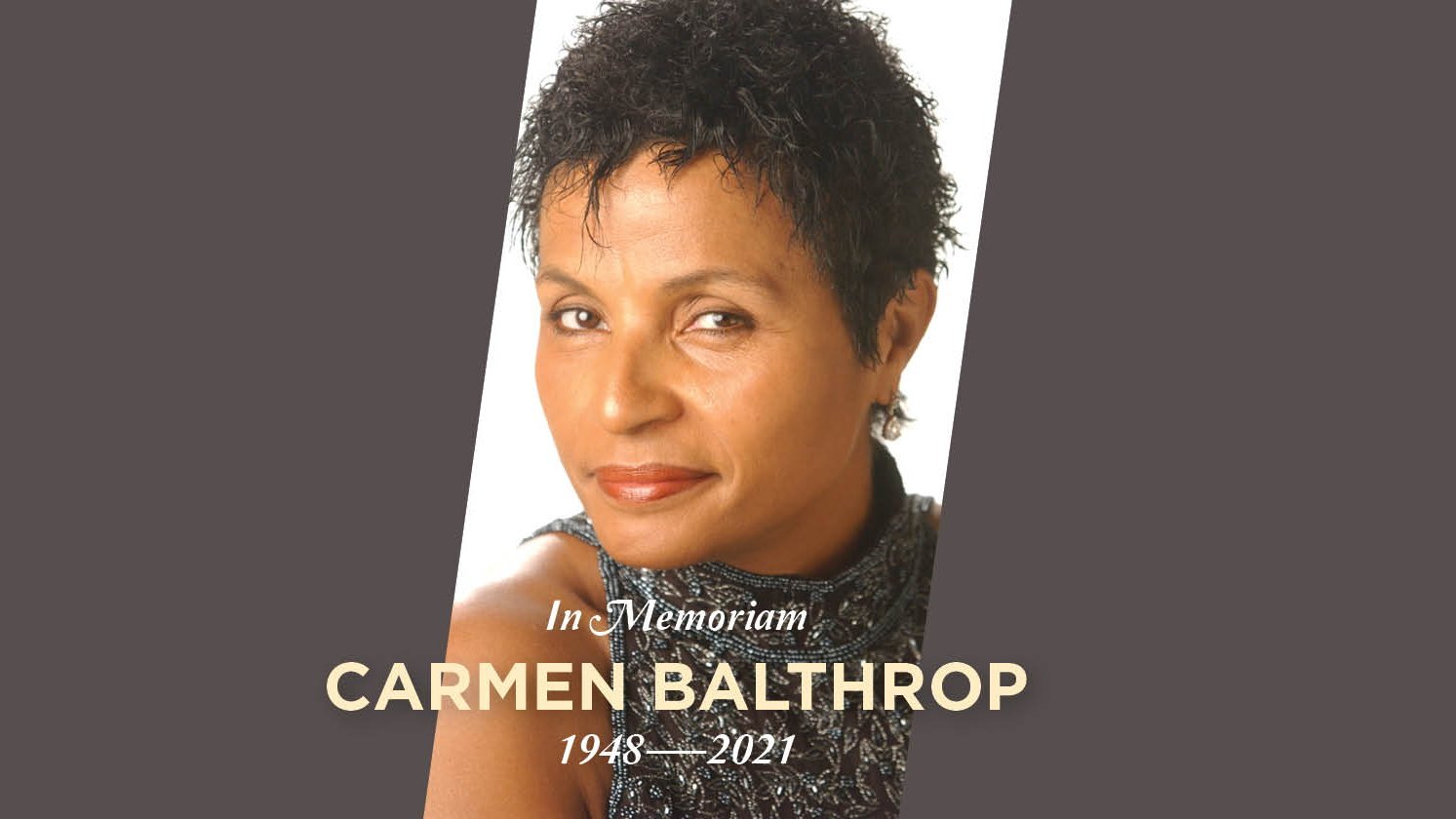 (Photo courtesy of University of Maryland School of Music)

On a spring day in 2001, the music school faculty sat in a meeting. This meeting was to conclude a fantastic school year once again. Routinely, former director Christopher Kendall asked if there were any announcements at the end of the meeting. Voice professor Carmen Balthrop stood up and said it was her birthday. Everyone applauded. She then proceeded to serenade herself with the tune of “Happy Birthday.”

Balthrop’s performances always featured the most dramatic dynamics with intention. Naturally, as an opera singer, she used heavy vibrato and sang effortlessly in higher registers as a soprano.

She performed the song with great “bravura that you, of course, would expect from a singer,” said Gregory Miller, the current music school director who was present at that meeting. “At that point, I realized that I had a friend in Carmen,” Miller said.

Those who knew Balthrop would expect nothing less, as “it was typical Carmen,” he added.

Balthrop, who died on Sept. 5 due to pancreatic cancer, is remembered for her incredible wisdom, advocacy for others and “opera diva” personality. She also brought her dynamic and grandiose thinking.

Balthrop served as the music school’s associate director for academic affairs and undergraduate studies and the coordinator of the Voice and Opera Division.

“I was looking for somebody who would step into my former role as associate director, so I immediately went to Carmen,” Miller said. “She stepped in as if she had been doing it for years. But that was Carmen. Carmen … always had an aura of confidence in everything that she did.”

The Voice and Opera Division — as Gran Wilson, the voice and opera coordinator, described it — is “an amazingly diverse” department in the school, all thanks to Balthrop. Outside of the music school, Balthrop was an involved community member, serving on the University Senate.

Balthrop had a way with words, always knowing what to say and exactly how to say it. In more intimate settings, such as a private lesson, she always knew how to effectively get her point across.

Reyna Moore, a sophomore music education and voice performance major and a recent student of Balthrop, said she had a “beautiful soul.”

Moore said she keeps a quote on her laptop reminding her to smile because Balthrop would always tell her that singers were “actresses who always tone a smile and speak with authority.”

“She was always more like an aunt to me because she never held back,” Moore said. “We didn’t know each other that well, but through the semesters and everything, she taught me a lot about myself and gave me so much confidence.”

“I was so mad, I wanted to switch voice teachers,” Clendenin said. “I just remember the next lesson with Carmen, and just hearing her teaching me and I was like, this woman is not malicious. She’s not … trying to stop me from living my dreams. She literally just wants the best for me in every way — health, spirit, and in music.”

“She really worked with the whole person and really believed in working with the student and the singer, as an individual person,” said Ziegler, who worked with Balthrop for 20 years.

Balthrop was also an inspiration to students of color, especially in the arts, who might have doubts about their pursuit, Wilson said.

Wilson reflected on a time when Balthrop said that, as a person of color and an artist, she knew that she needed to “outwork, outperform, [and] outlast the competition or the situation.”

“That’s an inspiration to all of us,” he said.

Balthrop received her bachelor’s degree in music in performance at this university and her master’s degree of the same subject at the Catholic University of America.

She was a natural with stage presence, and her divine and regal voice made everyone in the room turn their heads. Balthrop, who was often described as an “opera diva,” performed in many acclaimed stages, her “electrifying” and “silky” voice resonating throughout Carnegie Hall, the Kennedy Center and the White House.

Wilson said the voice faculty would spend time in between classes laughing and sharing stories, nurturing a family-like atmosphere.

“All the voice studios are on the third floor of the music school, and we all love each other,” he said. “We were, all the time, in the hall telling war stories from our careers, and the kids would have to push us into the studios for the lesson sometimes because we’d be having just such a great time out there.”

Balthrop had a “wry sense of humor” that brought smiles to both students and colleagues, Wilson added.