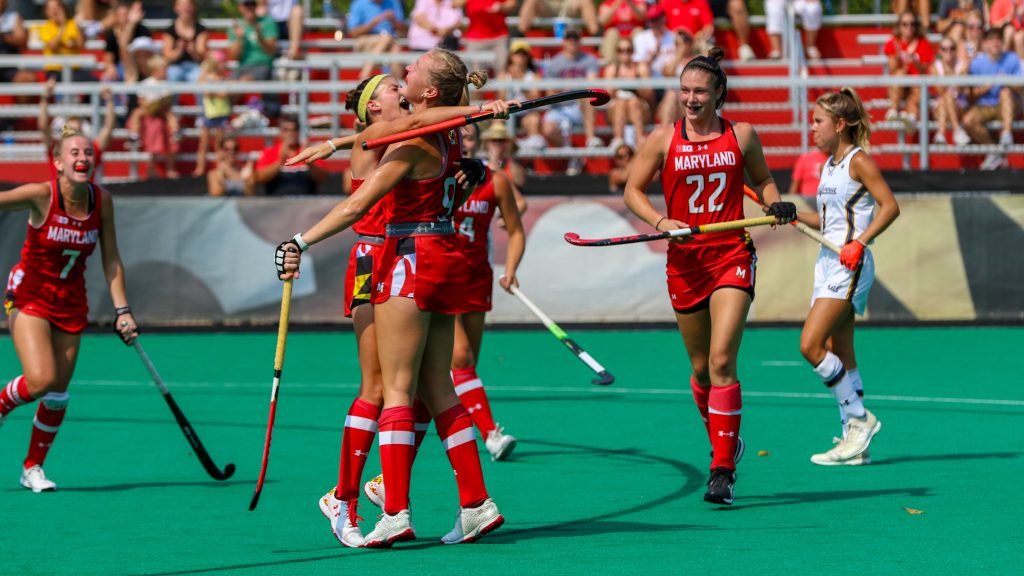 Early in the first quarter of No. 7 Maryland field hockey’s match against California, the Terps drew the second of their 13 penalty corners. After the initial shot was deflected and passed around, junior Belle Bressler ended up with the ball and flipped it into the cage.

Bressler and her teammates celebrated. It was the first goal of the junior’s Maryland career.

While it was far from the only goal they got, it was the only one the Terps needed. They pulled off their third straight shutout with a 4-0 thrashing of the Golden Bears. Maryland’s defense hasn’t let in a goal in 14 consecutive quarters.

“We always say that defense wins championships,” coach Missy Meharg said. “If you can go with shutouts, that’s the name of the game.”

Just as it did in Friday’s match, Maryland commanded the possession early. Within the first seven minutes, Hope Rose and Margot

Lawn fired shots that didn’t hit, but they were able to cut through Cal’s defense to give themselves promising looks.

On a penalty corner, Riley Donnelly took the first shot that missed wide. The Terps were aggressive on the rebound. Emma DeBerdine was among several players who deflected the ball. Eventually, it bounced over to Bressler, who quickly flicked the ball past Golden Bears netminder Cato Knipping.

“I’ve been working really hard at goal scoring and framing the goal,” Bressler said. “It was just an awesome feeling.”

The Terps’ hot offensive streak continued throughout the first half. While Bressler’s goal was the only time they would find the back of the net in the first 30 minutes, Maryland’s defense held Cal to just two shots.

And early in the third quarter, the Terps kept rolling.

Kyler Greenwalt flew down the pitch, leading a fast charge downfield a step in front of two defenders. The defense caught up with her when she reached the net. Greenwalt dumped the ball behind her to Julianna Tornetta, who quickly took a shot.

Knipping stepped out of the cage to challenge Greenwalt before the pass. A pair of Golden Bears were on the line to knock Tornetta’s soft shot away — but Greenwalt hopped back in and finished the goal.

Maryland celebrated its flashy goal and jumped out to a commanding 2-0 lead. And its offense didn’t slow down.

About five minutes later, Lawn sent a cross from the edge of the circle toward the cage. Castaldo got open and only had Knipping in front of her. She quickly flipped the ball through the right gap and past Knipping — extending the lead to 3-0.

And with a minute and a half left, Tornetta registered her second goal as a Terp, sending one in off an assist from Castaldo. Moments later, Maryland celebrated again. The defense capped its 14th consecutive scoreless quarter after holding Cal to three shots on the match.