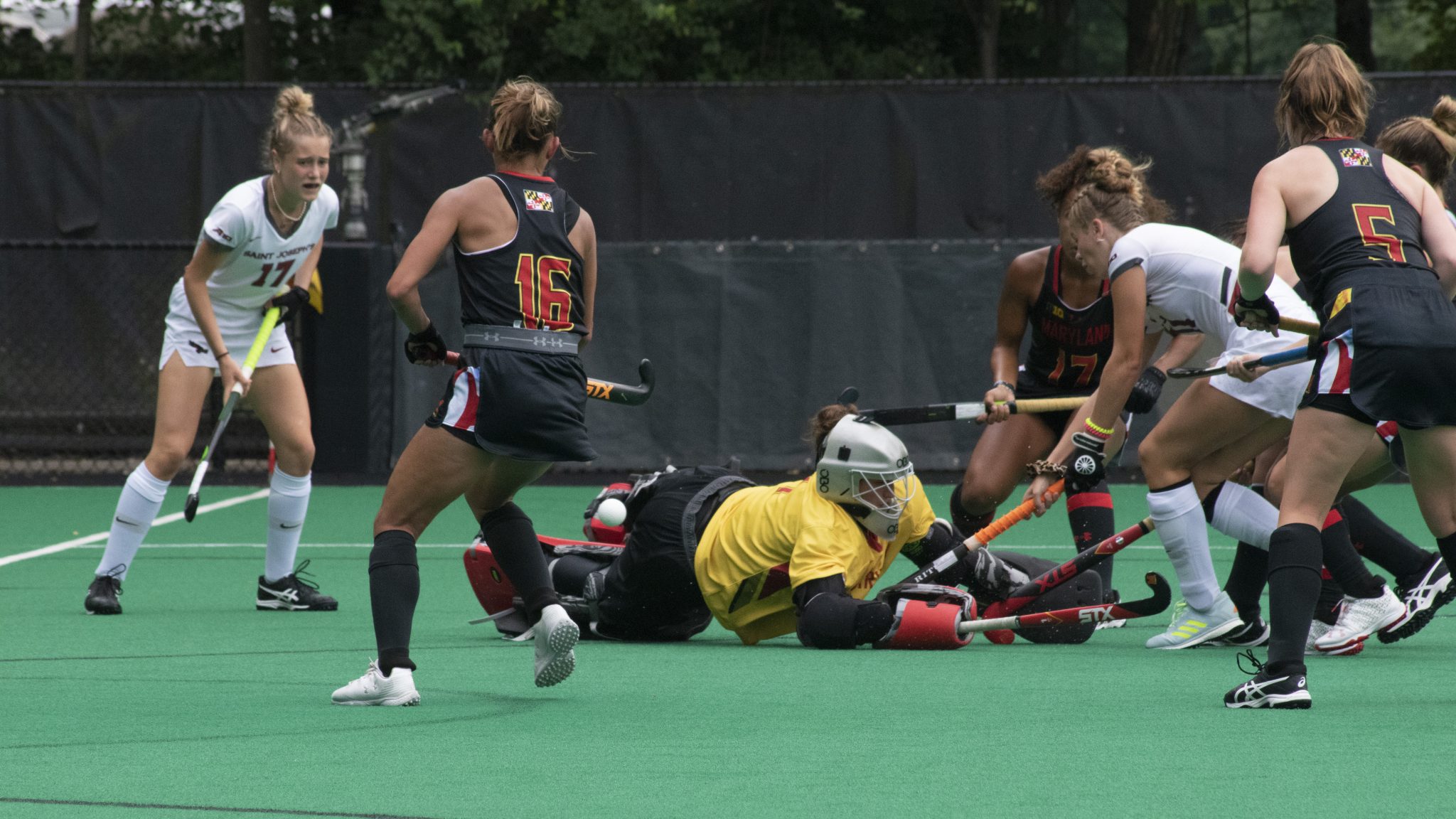 With a particularly large crowd cheering them on, Maryland field hockey’s attack couldn’t have had a much better start on Friday afternoon.

The Terps exploded early, taking the first nine shots of the match. But despite playing one of the most dominant quarters it has this season in the first, Maryland couldn’t find the back of the net.

Margot Lawn made a shifty play in the circle, maneuvering by multiple UMass defenders. She sent a quick, strong pass to an open Riley Donnelly, who flipped it past  Minutewomen goalkeeper Marlise Van Tonder.

And that was all the offense it needed. After taking 23 shots, Maryland pulled off its second straight shutout of a top-25 program, blanking UMass, 1-0.

“I love that a brand of Maryland can bring out the best in teams,” coach Missy Meharg said.

The crowd wasn’t always rowdy, though. With the 20th anniversary of 9/11 on Saturday, Maryland field hockey held a moment of silence before its match began.

The largest crowd the field hockey team has seen since before the pandemic came to a hush, thinking about the looming anniversary of one of the most tragic days in American history.

“Whether you’re from this country or not, it’s very powerful,” Meharg said. “I’m certainly very grateful to compete after such a moment.”

After the sobering moment, the Terps came out firing.

Maryland’s attack dominated the time of possession, but Minutewomen goalkeeper Van Tonder wasn’t letting anything past her. She kept the Terps scoreless for nearly 20 minutes.

Then, Maryland got past Van Tonder. Lawn was working with the ball in the circle and fired a strong pass toward the cage. Donnelly was open in front of the goal where there was a small gap between the post and Van Tonder. The senior pushed Lawn’s pass into the net, and the Terps took a 1-0 lead.

“It’s exciting anytime to play, but to see everyone out here cheering us on — everything comes together,” captain Brooke DeBerdine said. “Our appreciation for the game is so strong right now after last year.”

UMass got its offense going a bit as the first half continued, but only one of its six shots was on goal.

The Terps were held without a penalty corner in the second quarter but resumed their aggressive play in the circle in the third. And they kept getting closer and closer to a second goal, keeping the ball rolling with strong passes and fast shots.

[Maryland field hockey’s shutout of Duke was a team effort]

On one close play, Bibi Donraadt inserted the ball to set up an unsuccessful shot from Donnelly. But Margot Lawn continued to be particularly aggressive in the circle and whacked another hard shot at Von Tender.

Once the clock turned to the second half, there was plenty of energy at the Field Hockey and Lacrosse Complex. It was a lively environment in College Park with a large crowd in attendance at the Terrapin Invitational.

The players on the pitch continued to feed off that energy. On the Minutewomen’s sideline, Steph Gotwalls was waving a UMass flag in the air as the players fired up their teammates on the field. The Terps’ side was particularly vocal and passionate, as they’ve been all year.

Across its first three matches, Maryland took a total of 46 shots. On Friday, it took half of that number — peppering UMass with 23 shots.

The Terps had a 1-0 lead, which was all they needed to take the game and kill UMass’ undefeated season. The Maryland victory song reverberated through the speakers as the crowd cheered, and the Terps celebrated their second straight shutout.