Maryland field hockey’s shutout of Duke was a team effort 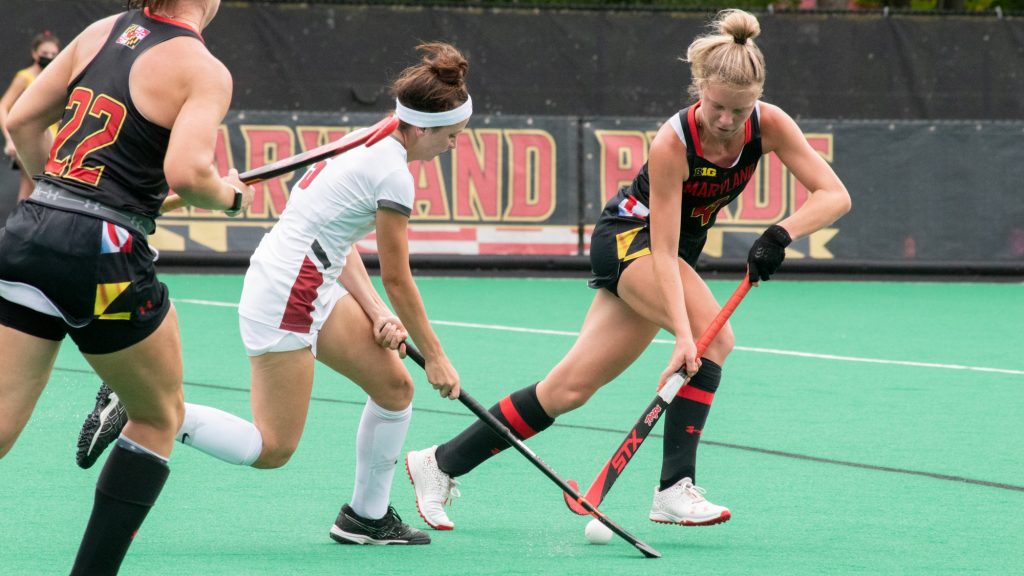 Beating Duke on Sunday meant a lot to Maryland field hockey’s Margot Lawn. The Pasadena, Maryland, native transferred to the Terps after a couple seasons at Louisville, where she saw plenty of the Blue Devils in their ACC matches.

Lawn and the Cardinals did pull off wins over Duke during her time at Louisville, but beating the Blue Devils was different this time. She felt like she was representing her hometown and home state.

“It was really special to me,” Lawn said. “It was more than hockey.”

When Maryland was in the ACC, its rivalry with Duke was one of the greatest in all of college sports. It was no different on the field hockey pitch.

Once the Terps moved to the Big Ten in 2014, coach Missy Meharg kept their field hockey rivalry going with the Big Ten/ACC Cup, where the Terps and Northwestern each square off against Duke and Boston College.

While Maryland has earned a couple wins against the Blue Devils since leaving the conference, it hadn’t posted a shutout since 2012. Until this past weekend.

After a year off due to the pandemic, Duke hosted the Big Ten/ACC Cup in Durham, North Carolina. On Sunday, the No. 7 Terps owned the pitch in a 4-0 thumping of the No. 18 Blue Devils.

“I’m not surprised we shut them out,” Meharg said.

Lawn wasn’t the only star who shined in Sunday’s win.

Bibi Donraadt — who was named Big Ten Offensive Player of the Week on Tuesday — scored two goals on four shots. Julianna Tornetta and Hope Rose collected their first goals in Maryland uniforms. Noelle Frost pitched a shutout as the defense held Duke to four shots — none of which were on goal.

Part of that defense was junior Maura Verleg, who has played every minute of this season. In the center back position, Verleg was all over the top-20 squad’s midfielders.

She didn’t give the Blue Devils any chances to score and they drew just two penalty corners on her watch.

Verleg commanded the center of the backfield, bringing all kinds of energy and speed to shut down Duke.

“She made a commitment to being the field general,” Meharg said. “She did very well.”

Verleg transferred to Maryland from New Hampshire prior to the spring season last year. The Dutch native was the America East Rookie of the Year after a dominant freshman year with the Wildcats. She came to a bigger school to play field hockey at a higher level, and she thrived in her latest contest.

“[Verleg] played the best game she’s played since she’s been at the University of Maryland,” Meharg said. “She decided to transfer to Maryland to play at this level, and I’m super proud of her.”