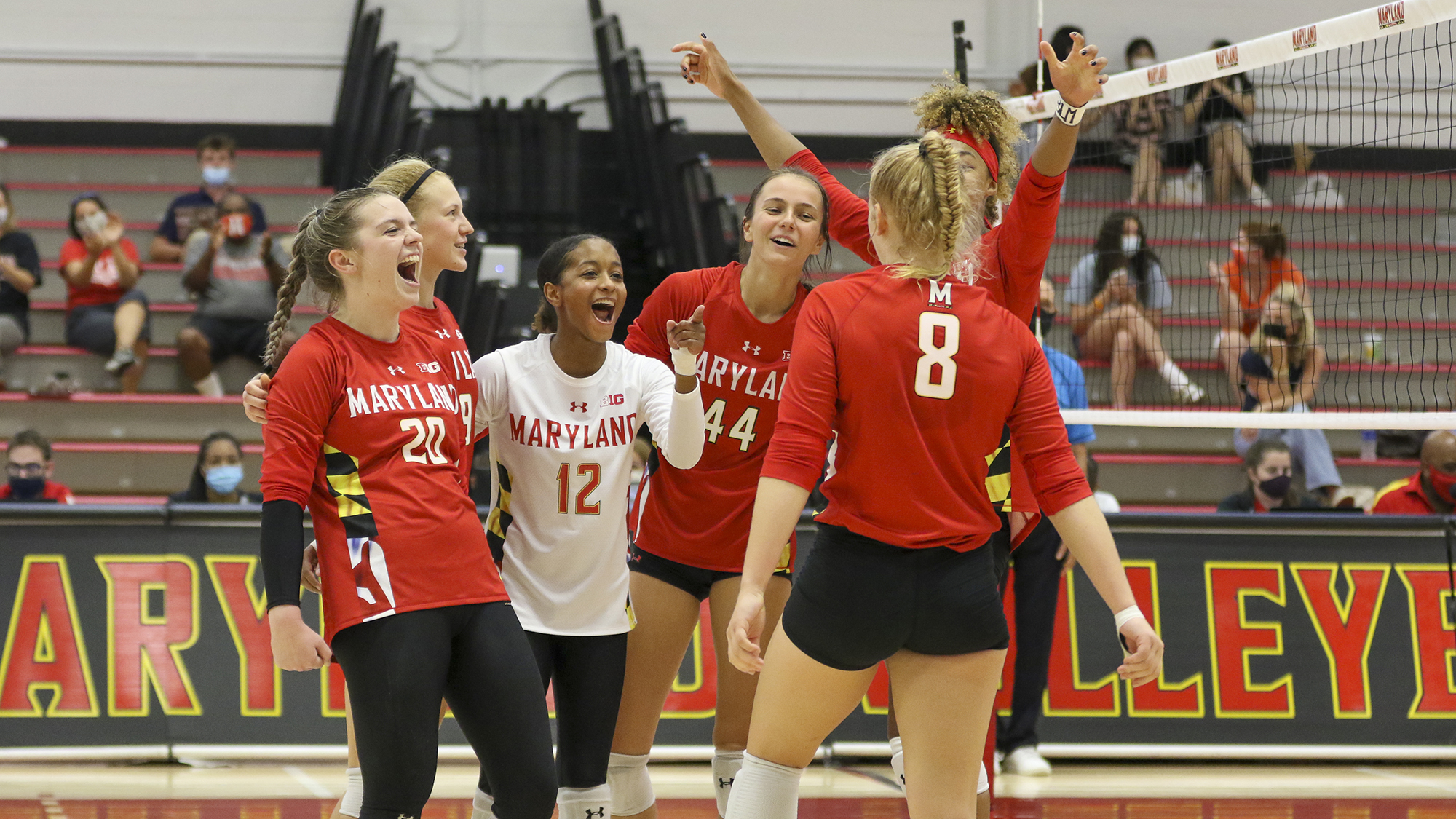 Late in the second set, Sydney Dowler launched a missile from behind the service line, sending a powerful overhead serve in the direction of Quinnipiac’s back row.

The ball whizzed towards the feet of outside hitter Aryanah Diaz, who was unable to handle Dowler’s swift strike. And the ball careened wide of its target to the delight of the Terps’ bench.

It was the pinnacle of a commanding pair of performances for Maryland volleyball, which swept both Howard and Quinnipiac, moving to a flawless 8-0 on the season.

“I thought we played pretty clean,” coach Adam Hughes said. “I thought we did a pretty good job in serve-receive, I think we only gave up maybe three or four aces on the day which is pretty good for us.”

The Terps’ big day started off with a bang, as Hughes’ squad came out scorching to open their first matchup of the Charm City Challenge against the Bisons.

Middle blocker Rainelle Jones got the ball rolling for the Terps early, registering six first-set kills on just nine swings to push the pace for Maryland.

While Howard freshman outside hitter Bria Woodard would respond with three kills of her own, it wouldn’t be enough to contain the undefeated Terps in the opening set.

After a Jones kill knotted the frame at nine, a block assist from Jones and Laila Ricks spurred an 8-2 Maryland run, opening up the floodgates as the Terps ran away with the first set, 25-16.

And Maryland’s dominance over Howard would only grow.

Outside hitter Sam Csire began making her presence felt in the second set, as the Terps’ leader in kills accumulated four of her match-high 12 spikes in the second frame to propel her squad to an early advantage.

Maryland’s defense was stifling throughout the contest, finishing with 12 block assists on the afternoon, holding the Bison to a measly .160 hitting percentage for the match.

“I think our defense is a really big part of it, not only our block but the amount of digs that we get,” Ricks said. “I feel like we extend rallies that way and keep them to a lower hitting percentage.”

With both sides of the ball clicking for Hughes’ squad, the Terps made quick work of Howard. Spurred by Csire’s offensive output and a suffocating middle block, Maryland coasted to back-to-back 25-17 set victories to sweep Howard, 3-0, pushing its spotless record to 7-0.

But the Terps weren’t done.

Just hours later, Maryland jogged back out onto the Baltimore floor for its second match of the day, this time to take on the Quinnipiac Bobcats (1-6).

The Terps showed no signs of cooling off following their break, with Ricks leading Maryland’s first offensive charge on a five-kill outburst in the first set.

“I thought Laila Ricks had a pretty good bounce back,” Hughes said. “She did a good job managing the game and taking some big swings, made some really good blocking moves… She’s a player that’s going to have a special future, and I was proud of her for her performance today.”

The Terps quickly raced out to a 10-point advantage from Ricks and Csire gashing the Bobcat’s defense with an array of putaways, giving Maryland a large cushion.

And as a cross-court Dowler set was tipped deftly over the outstretched arms of two defenders by Csire late in the frame, the Terps had quickly won its eighth straight set in dominant fashion, 25-14.

With all of the momentum flowing on Maryland’s side, Hughes’ squad continued to keep their foot on the gas for the remainder of the contest.

The Terps, who had notched six service aces earlier in the morning against Howard, tallied six more aces in the second set alone against the Bobcats.

Maryland seemingly found every hole in Quinnipiac’s zone from behind the service line en route to a 25-18 second set victory.

“Whenever we practice [serves], we try to keep the ball to be flat and clean,” Ricks said. “we’ve been practicing that a lot, so it was really cool to see that in the game today.”

And with one set standing in the way of an undefeated first eight games, the Terps quickly sealed the deal.

Racing out to a 14-3 advantage behind a five-kill blitz from graduate transfer Paula Neciporuka, Maryland held the Bobcats to a -.029 hitting percentage in the set. The Terps steamrolled through Quinnipiac in the final set, 25-12, improving to 8-0 on the season.