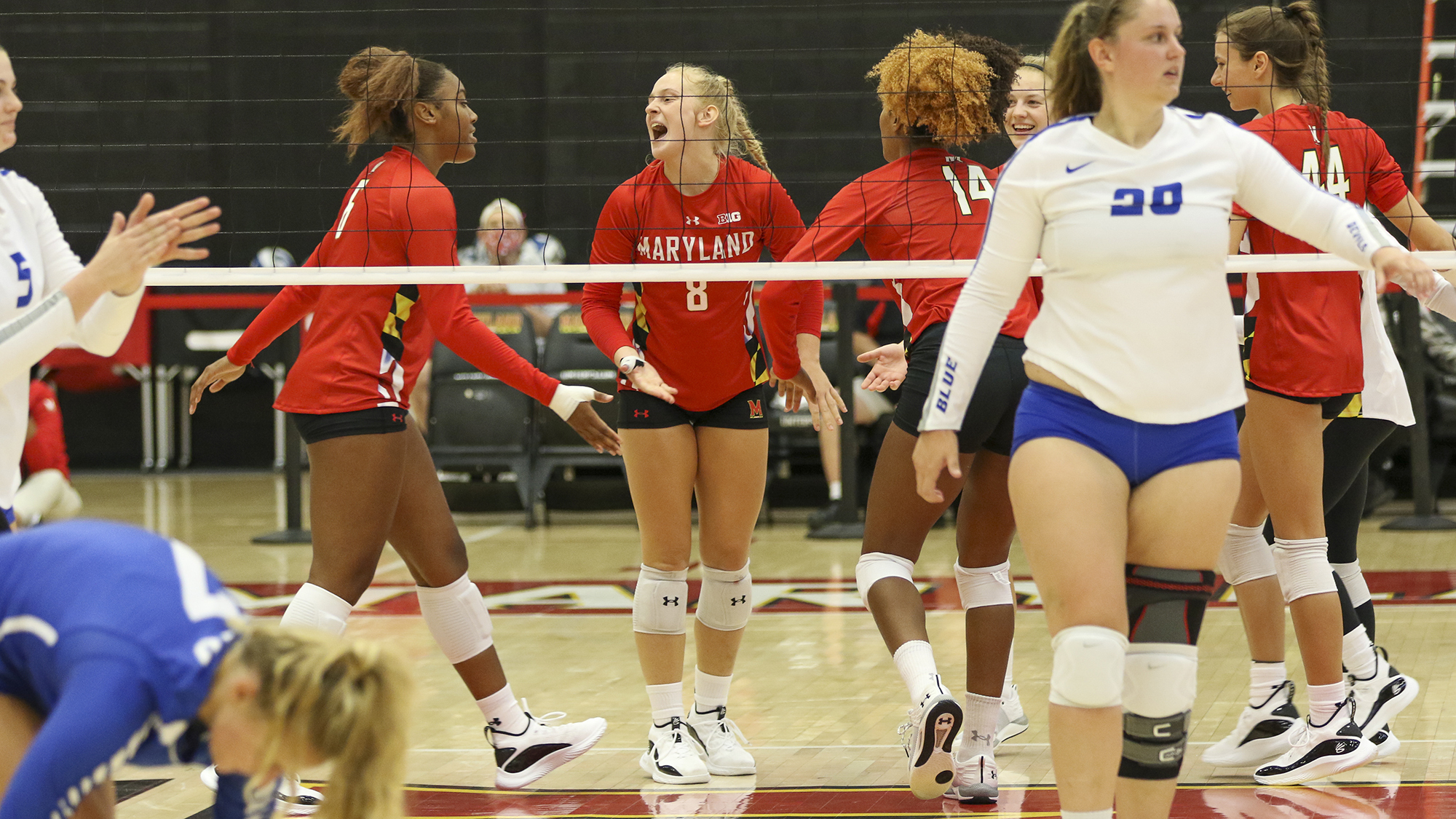 Sydney Dowler celebrates a point with her teammates in Maryland’s 3-0 win over Central Connecticut State on Aug. 28, 2021. (Cam Andrews/The Diamondback)

After a tipped Kayla Spells kill attempt floated wide of its target, Maryland volleyball erupted in elation. Milan Gomillion clenched her fists in celebration while Rainelle Jones lifted her arms to embrace her teammates in the team’s final huddle of the day.

It was the culmination of a nail-biting five set thriller for the Terps, who knocked off Temple en route to an undefeated weekend at the Cherry and White Challenge in Philadelphia.

“I thought it was a really gritty win,” setter Sydney Dowler said. “Our first time going to five [sets] this year … it was a great team, and a really exciting game for us to go into, and we got to learn a lot through it.”

Against the Owls, Maryland showed poise during crunch time to close out the contest.

Following a Temple putaway from outside hitter Katerina Papazoglou that gifted the Owls multiple match points, the Terps were on the brink of dropping their first match of the season and squandering their undefeated record.

After watching Temple’s next serve creep wide, the Terps’ touted defense forced a Papazoglou misfire on the next point to bring the pivotal fifth frame to a deadlock.

“I thought the group did a good job of just being patient, staying with it,” coach Adam Hughes said. “They had a match point against us, and [they were] still patient, still locked in.”

And just points later, Maryland sealed the deal. A stifling Jones block gave the Terps a match point of their own, and as Spells’ tip rolled wide, they escaped their first true test of the season with a five-set victory on the road.

“First set we just came out really strong, really clean, and then they fought back,” Dowler said. “But we eventually pursued and figured out how to play our game again.”

Dowler notched 125 assists to go with eight kills and four aces on the weekend, good enough to win Cherry and White Challenge MVP honors from the setter position.

She was joined on the All-Tournament team by Jones and outside hitter Paula Neciporuka, who each took home first team honors.

For Dowler, fighting to an undefeated finish on the road in Philadelphia showed her team’s true identity — its resilience.

“Grit has been a value that we chose as a team from the beginning, and we have really showed that together,” Dowler said. “I think that is huge, and I’m so proud of the way that we’ve fought like that.”

That’s a sentiment shared by Hughes, whose team’s 6-0 start is the best opening record in his four-year tenure at the helm in College Park.

“This group wanted to be defined by being gritty,” Hughes said. “That was a great, gritty win.”