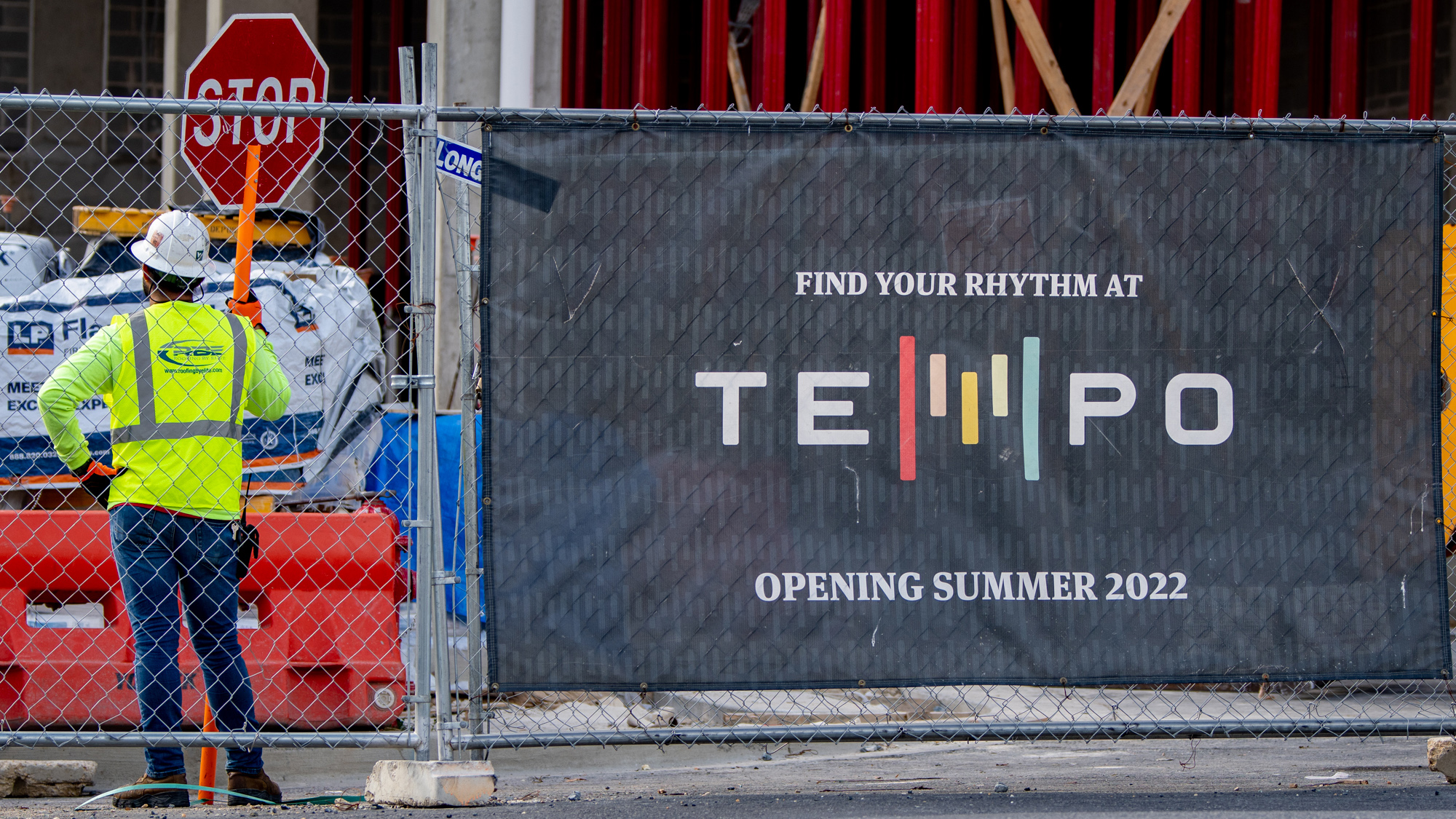 A worker stands inside the construction site for a new apartment complex called Tempo on Route 1 on Sept. 9, 2021. (Joe Ryan/The Diamondback)

A surge of new apartment units in College Park could prompt housing costs to increase in the city, exacerbating housing affordability issues for University of Maryland students.

In the next year, two new housing projects are expected to open in College Park: the Tempo and Aster projects. Greystar, the developer that manages The Alloy and The Varsity, also has plans to partner with Terrapin Development Company on a project on Knox Road.

The arrival of the new complexes comes as student housing demand increases. Some experts say they are also the latest effort to incentivize people to move to College Park — the rise of the Discovery District and proximity to the Metro being other incentives — which could in turn cause housing prices to soar.

Tempo, set to open in August 2022, is designed for students at this university. The building, which will sit next to Taco Bell on Route 1, also received a partial Revitalization Tax Credit from the city earlier this year. Representatives from developer Gilbane said the rates for the apartments would be released later this fall.

The Aster project on Route 1 by developer Bozzuto will include 393 units, but is not explicitly marketed for students.

This potential increase in costs comes as housing prices in the area are already on the rise. Last year at University View, for example, a four-bedroom, two-bathroom apartment ranged from $1,110 to $1,135. This year, it ranges from $1,225 to $1,375.

The new housing projects are all market-rate, meaning that its cost will be competitive with other apartment buildings.

Nicholas Montgomery, an economics lecturer at this university, likened the continual increases in rent and market-rate housing to “growing pains.”

Market-rate apartment buildings are pervasive across College Park because the city is susceptible to the economic forces that come with living in the greater Washington, D.C., area, Montgomery said.

“If the university is not going to provide at cost or below-market housing, this is, to some degree, the price you have to pay to reside as an adult in the D.C. area,” he said.

Ken Ulman, Terrapin Development Company president, also pointed to Prince George’s County housing laws, which do not require a certain number of housing to be below market-rate, unlike Montgomery and Howard counties.

But Ulman also noted that the new complexes are not certain to drive up costs citywide.

“We are watching all of this very carefully and do believe strongly that the amount of supply coming onto the market within the next few years will bring pricing down in some of the existing product,” he said.

Although rates for the incoming apartments are not finalized, particle astrophysics graduate student John Evans, who pays over $2,000 a month for a one-bedroom in The Alloy, said he has no reason to believe that prices will be decreasing.

“I’m not very optimistic,” Evans said. “It feels like if the city wanted to do something about it, they’ve had many years to do so.”

There doesn’t seem to be a clear-cut way toward more affordable housing in the area. In fact, student tenants might eventually find themselves competing for housing with young professionals working in the Discovery District, Montgomery said. Part of the Discovery District’s mission is to attract businesses and professionals, particularly recent graduates and researchers, to College Park.

And as College Park implements more infrastructure improvements and incentivizes people to move to the city, it’s likely that prices will go up due to demand, said Willow Lung-Amam, an associate professor of urban studies and planning and director of community development for the National Center for Smart Growth at this university.

Even if housing rates did stabilize, Montgomery said, it would likely happen over several years when apartment buildings that are now considered new become older and are forced to lower their prices to compete with newer buildings.

“It could take another decade, and nothing is gonna happen overnight,” he said.

And even if housing is considered affordable, it doesn’t mean it will be in good condition or affordable for everyone, Lung-Aman said.

Hayden Renaghan, the SGA’s deputy student liaison to the city council, is working on a survey that aims to provide context to housing problems in College Park. From interviews she conducted as part of the survey process, the philosophy, politics and economics major noted a pattern of concerns related to high prices, landlord-tenant relationships and the proximity of affordable housing to the campus.

Once the survey results are analyzed, Renaghan hopes to bring them in front of the city council and recommend action items to alleviate housing-related concerns.

“There are definitely steps that need to be taken in order to make housing more accessible to not only students but also long term residents,” she said.