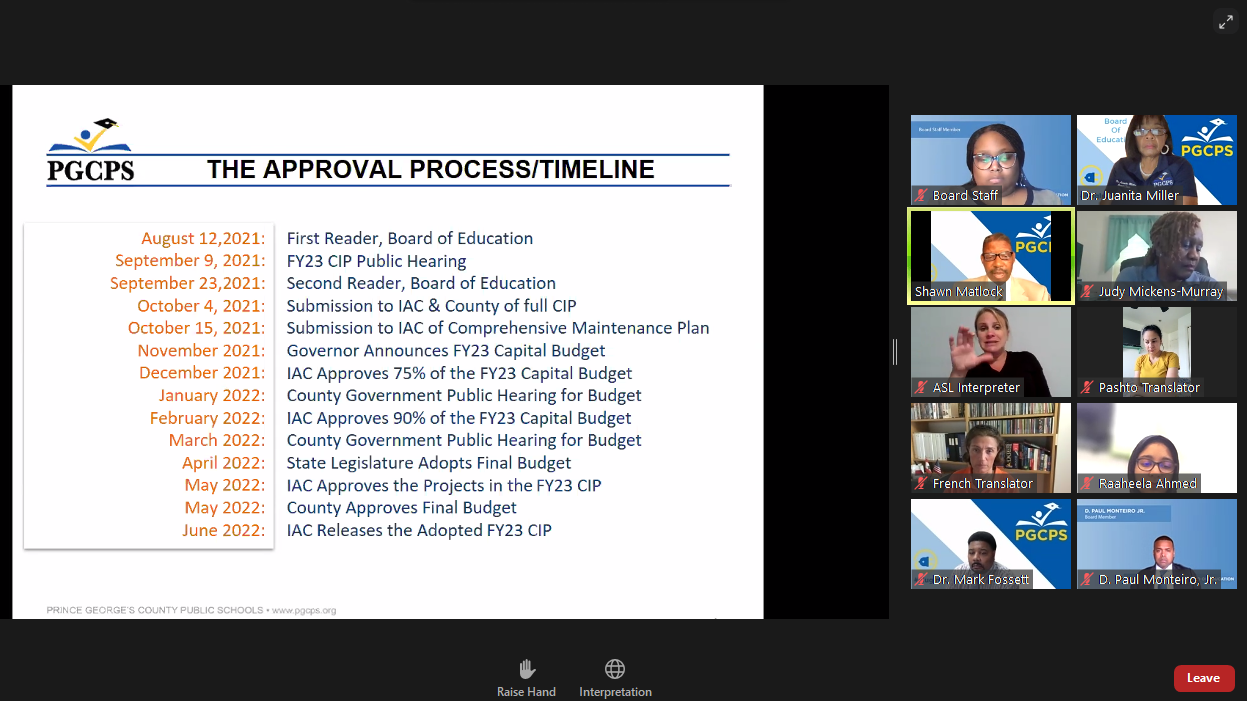 Prince George’s County Public Schools has a current budget request for construction projects set to occur over the next one to three years that amounts to approximately $267.1 million. Of the amount requested, $215.8 million, or just over 80 percent, would be funded by the county, with the remaining $51.3 million funded by the state.

The Capital Improvement Program, designed to determine funding during the fiscal year by prioritizing renovations, infrastructure and construction needs of certain educational facilities in the county, is also requesting funding to repair and replace infrastructure, roofs and HVAC systems in schools.

Of the 13 speakers at the public hearing, five county residents demanded for Hyattsville Elementary School — a school not listed for renovations or repairs — to be rebuilt, citing mold, a poor HVAC system and overcrowding.

Residents highlighted that Hyattsville Elementary is considered a Title 1 school, which means a vast majority of students receive free or reduced lunch, and that the school receives federal funding. Additionally, the student population is largely composed of Black and Latino students, with 51.7 percent of students being Hispanic or Latino, and 27.2 percent being Black.

“The fact that students attend a school in this state of disrepair, is a product of systemic racism,” said Joanne Waszczak, a Hyattsville resident.

Previously, the elementary school was slated to be renovated in the 2018 fiscal year’s Capital Improvement Plan, but parents contend that they have been waiting far too long.

The issue of rebuilding the school is one that has been fought by a community of parents and other county residents for years, and now Hyattsville Elementary School is not on next year’s capital budget.

“If it was urgent then, I’ll emphasize for you that it is emergent now,” said resident Patrick Paschall.

Other concerns brought up during the hearing included how some of the county’s other academic buildings currently sit on flood plains, are overcrowded, lack sustainable practices and have worn-down student athletic fields.

“My kindergartener, during COVID, has an in-person class size of 30 students,” said Lisa Burnham, a parent of a student at Accokeek Academy, who expressed concerns about overcrowded classrooms.

Additionally, Loretta Wilson, PTSA president of John Hanson Montessori School, called upon the board for a new facility for their students, citing the lack of proper HVAC, electrical and plumbing systems.

Wilson also expressed frustrations with lead in the water and the lack of proper air filtration, amid other concerns related to the spread of COVID-19 in schools. Other issues include a leaky roof and accessibility-related concerns for the physically disabled.