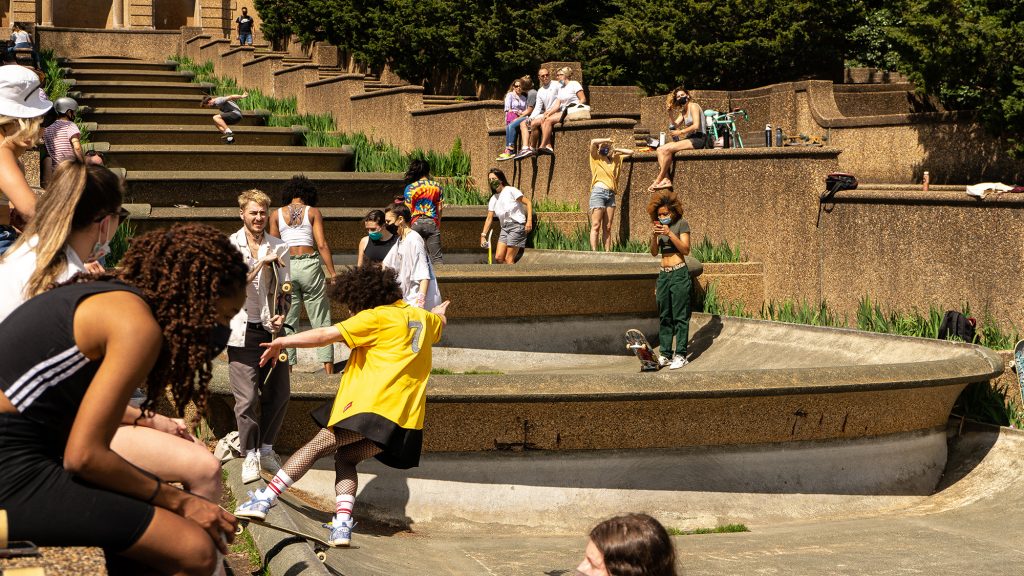 Hannah Bauer always wanted to get into board sports. However, they played volleyball their entire life up through college, which impacted their body to the point where they thought they wouldn’t be able to play another sport. But in 2017, Bauer bought their first skateboard and now skates 6-foot ramps and teaches other skaters how to do tricks.

Being from the Midwest, they said skating isn’t big there. But that didn’t stop Bauer. It took them two years to learn to balance on the board, they said, and currently, they are the co-founder and one of the co-leaders of DMV-based skate collective, Flo DMV.

“Flo DMV is a safe space that celebrates individualism while connecting skaters through community, and it’s a safe space for LGBT community,” Bauer said, adding that the group is also for anyone who “defines themselves as a marginalized skater.”

[The Diamondback’s summer rewind: The best songs of the season]

Bauer moved to Washington, D.C., in 2018 and said if they couldn’t find a skating group they wanted to join, they would make their own. Other skate collectives inspired Bauer to start Flo DMV in November 2019.

Flo DMV has rotating leaders, which Bauer said is common in collectives. It’s a “passion project” done in people’s spare time, they said. There’s little money involved — it’s all for the love of the sport.

The collective welcomes skaters of all ages, though most of its skaters are in their 20s. Moms have skated with their daughters at events, which is one of Bauer’s favorite moments to see.

This emphasis on creating a space for these underrepresented groups is integral to the collective. Bauer said “there’s a level of intimidation” felt when skating in male-dominated skate parks.

Another co-leader of the collective, Tracy Ennesser, said her experience when going to skate parks is that men can be “territorial,” and it’s hard to practice and fall in front of them unless you have a lot of confidence.

Ennesser is from San Diego and everyone there gets involved in skateboarding at a young age, she said. She skated throughout her adolescence, but not seriously until she moved to Washington, D.C. She went through a breakup and was “refinding” herself when she decided to skate seriously.

One day, Ennesser joined her best friend’s skate session, where she said something clicked for her. The next day she decided that skating was going to be the activity to “fill the void” and at 23 years old, bought a board, which she named “Dr. Trixie Wheels.”

After skating for about two years, Ennesser wanted to be a part of a community. She started out in Flo DMV as a member in late 2019 and Bauer asked her to step into leadership in September 2020. Soon after getting hit by a car — which put her out of skating for a while — Ennesser did five months of physical therapy before getting ACL surgery this past March.

“Skateboarding was my sanctuary. It was always my safe space, and especially through the pandemic when there was so much uncertainty and alone time and being afraid, that was an outdoor sport where I wasn’t afraid,” she said.

Becoming a co-leader following her injury was a silver lining, Ennesser said, because it was valuable for her to be a part of this community in a different way, and she would be able to learn more.

The collective held socially distanced events in the summer of 2020, but stopped in the fall of that year because the pandemic was getting worse and they didn’t want anyone to get sick, Ennesser said. This year, they’ve had a few events, such as Group Skate and Go Skate Day.

People have connected through the group’s Instagram account, getting inspiration from seeing other skaters do tricks, Bauer said.

The collective’s Instagram presence has helped them share their message of inclusion and what they stand for, such as taking part in protests or sharing mutual aid fundraisers and organizations. Now, Ennesser said, she wants to figure out how the group can connect with people who aren’t on social media, such as parents representing their children.

This emphasis on community and connection to other skaters is paramount to Flo DMV.

“I can say from personal experience that I’ve always enjoyed skating, had more fun and learned new tricks when I was skating with female, trans, queer skaters more because we just have a different outlook on skating,” Bauer said.

Jazper Taur, a skater and leader for the nonprofit organization Black Girls Skate, highly values this aspect of the collective. Like others, they found the group through Instagram and went to an event. Their first event was the group’s Pride Group Skate, where they learned how to drop in from Bauer. Taur said Bauer is a great teacher.

“Even though I was very scared about dropping in, Hannah really created an environment that made it very comfortable to just take that leap and try,” they said.

Taur grew up in skate culture around Washington, D.C., and was nervous to get started in skating because of unwelcoming skaters in their neighborhood. Flo DMV’s friendly and intimate atmosphere makes it easy for beginners to ask for help and get support, they said.

Taur started skating around three years ago after they got viral meningitis, which was almost fatal.

“I always wanted to skate. I’ve already almost died at this point, what can skating do to me that life hasn’t already done?” they said.

After having to relearn how to walk twice, skating was the only alternative Taur had as transportation to their wheelchair since walking caused them pain.

“My relationship with skating is very special to me because I’m chronically ill and I do have to watch what I do a lot,” they said. “But through skating and being there for myself, it’s helped me regain trust with my body, and properly support it through its healing process.”

Taur also appreciates how “nontraditional skaters” — underrepresented groups and those who aren’t in Thrasher or other magazines — are getting recognition from groups like Flo DMV.

“I really believe that as long as you enjoy skating you belong in skating,” they said. “It doesn’t matter what kind of skating you do. As long as you count yourself as part of the squad you’re in.”