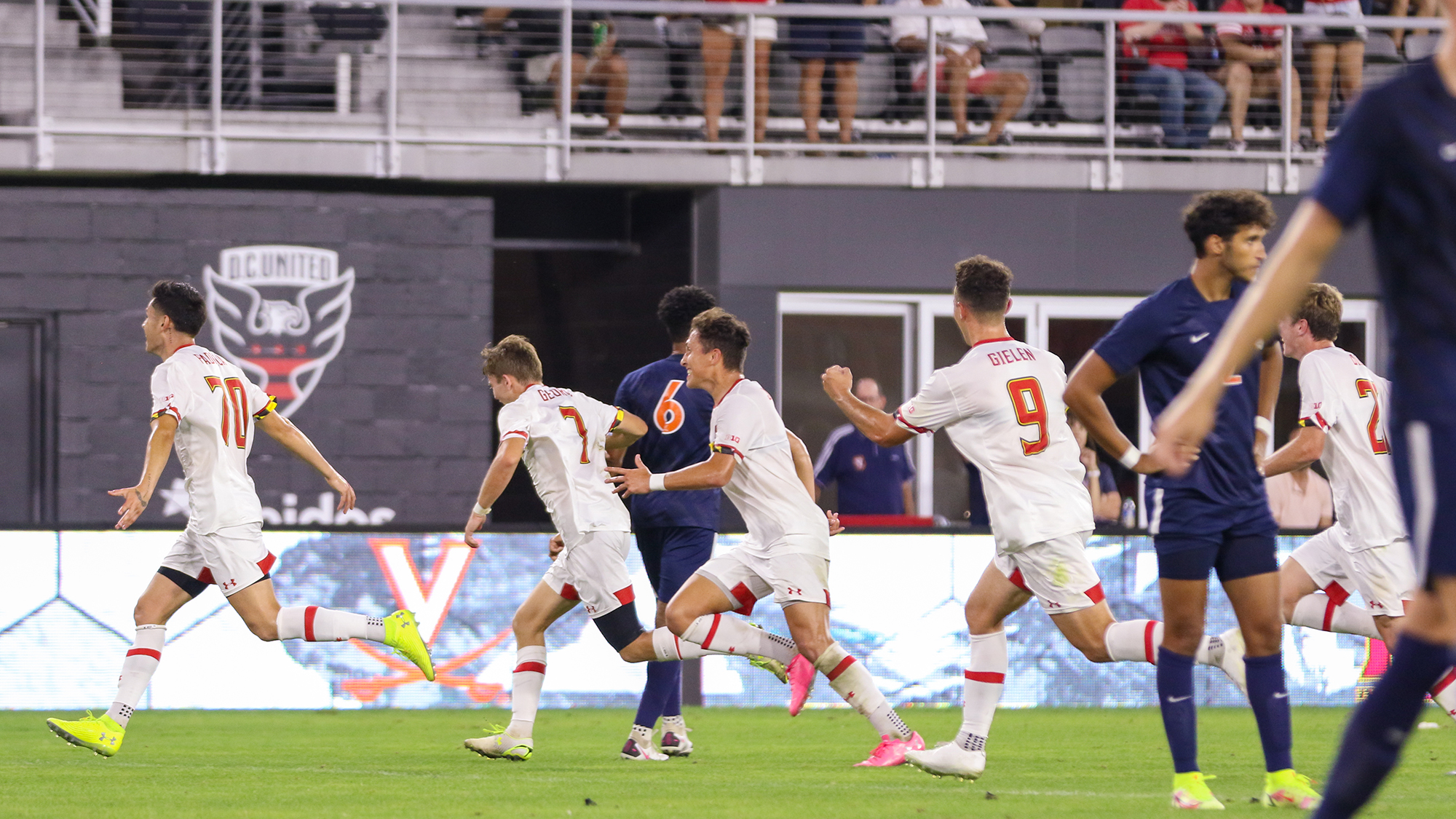 WASHINGTON — Brayan Padilla took things into his own hands.

Seemingly intercepting a pass that appeared intended for Malcolm Johnston, Padilla immediately launched an unexpected shot at the top left corner of the goal. Caught off guard, Virginia goalkeeper Holden Brown lept in vain as the shot netted.

“I just saw the ball there and I didn’t think about it,” Padilla said. “I just went for it, as soon as the ball went off my foot I knew it was going in.”

Padilla rushed toward the corner to celebrate with his teammates and the crowd of Maryland men’s soccer fans who had made the trek to Audi Field for the rivalry matchup.

Propelled by the 77th minute goal from Padilla, the No. 11 Terps came out on top, 2-1, beating the Virginia Cavaliers.

Early returns showed exactly what was expected: rough and hard-nosed play between the two long-time adversaries. As early as the second minute, Hunter George was dribbling between defenders, before catching the outstretched leg of a Cavalier defender, falling hard forward.

“For me, it was really easy to get into the game when it’s this big of an environment,” George said. “Right away, you feel the first tackle and then bang, you’re into it.”

Neither team could muster up much on offense with the rough play having a measurable effect on both team’s attacking units. The first shot by either team wasn’t until the 19th minute when Johnston had a chance saved.

The opportunity struck Virginia into action, as the Cavaliers pushed up the field and worked the right half before Michael Tsicoulias suddenly planted and fired one into the left corner of the net.

Both sides would go back and forth as each squad awoke and started taking  more chances with a 1-0 lead for Virginia. Cavalier goalkeeper Holden Brown racked up six saves in the first half as the Terps struggled to make up the deficit.

The best chance for Sasho Cirovski’s squad was toward the end of the opening half as Caden Stafford received a Jacen Russell-Rowe pass and his shot narrowly hit the crossbar.

“Five of the starters played 90 minutes three days ago so we’re gassed the first half, [but] we pushed through,” George said.

More madness ensued before the period-ending whistle, as Brett St. Martin fought a pair of Cavaliers for the ball before seemingly being taken down by Tsicoulias, dawning number 22, even though it was called on Daniel Wright, who wears 23. The call on Wright was his second yellow card and sent him out of the game for a controversial end to the first half.

With the Cavaliers fielding 10 men for the second half, it was apparent Maryland was out for blood on the offensive end. But while the spirit remained, the results just weren’t there, until a gift by Virginia gave the Terps a chance to tie.

“With ten men it’s a different game,” George said. “I don’t think they got all of them in our box … the key is to just keep wearing them down.”

As George pushed into trying territory, he tripped in front of the goal and the Cavaliers were called for a penalty. A pair of Virginia players kicked the goalposts, visibly frustrated, and Ben Bender buried the leveling goal on the ensuing kick.

More offensive inefficiency plagued Maryland as the evening went on, but it was enough to at least keep the Cavaliers away from their goal. But that would end in unexpected fashion.

A long-range rocket by Padilla netted in the top-left corner of the goal for the Terps and all of a sudden they were on top in the 77th minute.

With both teams fighting to the last minute, Virginia’s numbers disadvantage plagued them to its end as Cirovski’s squad held them to defending their own goal. Having the extra man edge, Maryland cruised to the 2-1 victory and nabbed their fourth straight win.

“The rivalry doesn’t really change and the expectations of both of our programs,” Cirovski said. “It’s nice now to at least even the series and look forward to next year.”