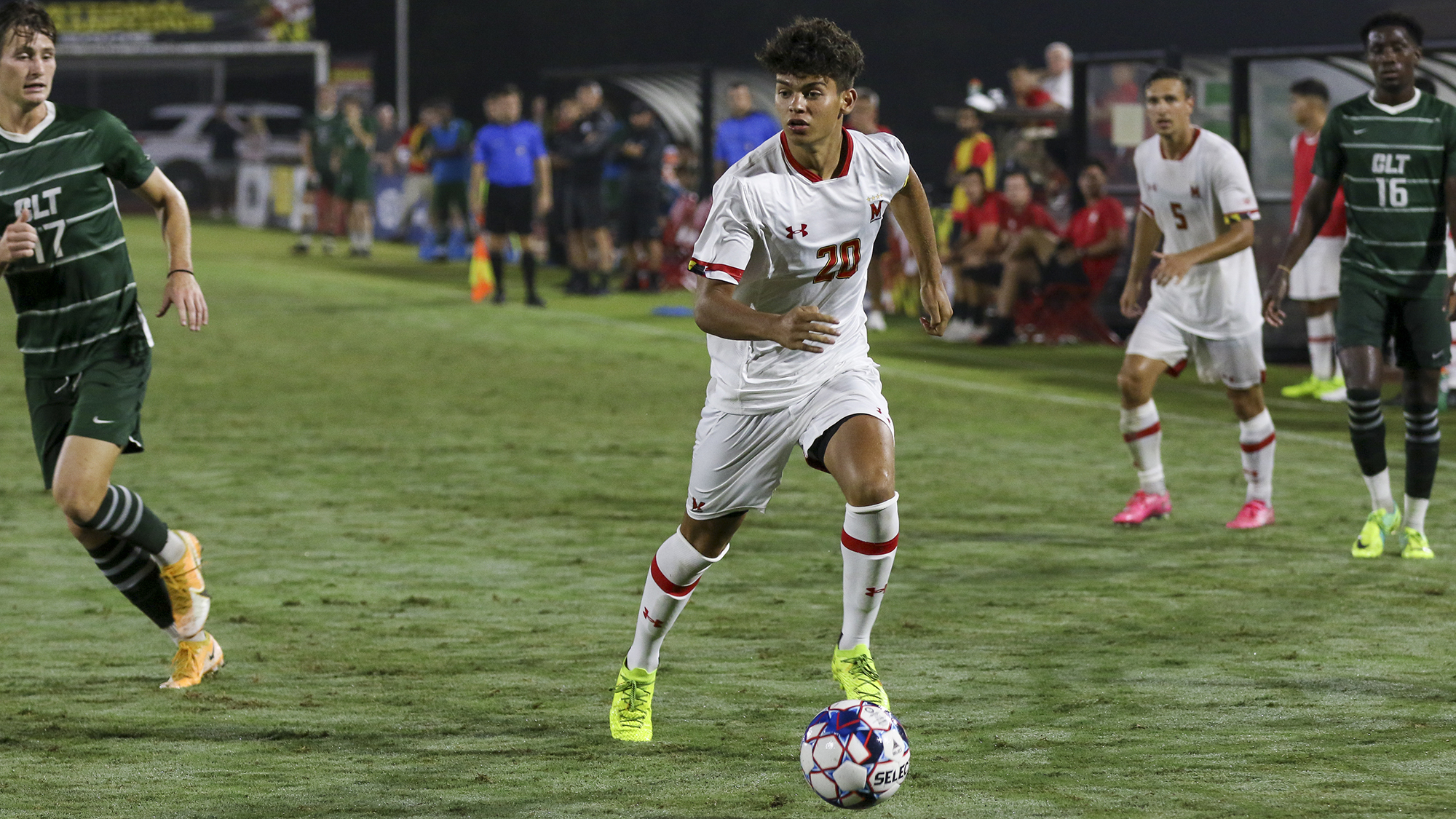 Anticipation echoed from the left corner of Ludwig field, set for a corner kick. And Chris Rindov was waiting to make his move.

A high kick came barreling toward the box, the ball spiraling towards a strong-leaping Rindov surrounded by three defenders. The defender headered the service from Ben Bender and sent the ball right past the George Mason keeper.

Buoyed by a strong defensive performance and a 61st minute goal by Rindov, the Terps rolled to a 3-0 overall record on Friday night against the Patriots, 2-0.

Stopping the momentum of a high-flying pass, Joshua Bolma crossed to his right past a Patriots defender and launched a near-indefensible shot to the right post. Looking back at his teammates screaming towards him, Bolma sent coach Sasho Cirovski’s squad to an early lead.

“It was a great ball from Hunter [George], I’m not gonna lie,” Bolma said. “I knew the guy was coming in hard so I just got to stay composed and then find where to go.”

And Bolma’s goal was inevitable.

The Terps had hammered two shots, one coming within a few feet of the same post, in the few minutes prior. Cirovski’s squad applied pressure and the Patriots goalkeeper came up short as shots kept coming his way.

Defense had kept George Mason grasping at shot opportunities and the Patriots chasing the Terps’ strikers down the pitch. The question was whether Maryland could hold up on defense in the closing 45 minutes, or nearly crumble toward the end, as they did a few days prior.

It was Jamie Lowell’s turn on the goalkeeper rotation, and if his performance against Charlotte was any indication, the Terps would be able to close out. But Maryland’s defense hardly let Lowell affect the game at all with only two shots by George Mason in the opening half.

“When we went into halftime [Sasho] was talking about buckling down on defense .. that was definitely the focal point we were trying to focus on, keeping a clean sheet,” Rindov said.

The second half saw George Mason apply pressure onto Lowell without anything coming to fruition. With hopes to turn the tide, the Patriots were disappointed as the Terps shifted the ball into scoring position.

Rindov’s aforementioned score made it 2-0 with 29 minutes to go in the second half and the Terps’ defense held as seconds ticked off the clock.

“Happy about Chris Rindov, who has been a great performer for us and has worked all summer on his attacking heading, and that was about as good an attacking header you’re gonna see on a corner,” Cirovski said.

Cheers from the crowd grew more confident as the matchup wore on and the Patriots frustration grew, earning a yellow card in the 76th minute.

The two-goal lead became too much for George Mason to overcome as Maryland landed their third straight win to start the season.

“We challenged our team to be better defensively coming out of the UMBC game, to be better in transition, to be better with the mental moments in the game, and they responded really well,” Cirovski said. “I think that’s the kind of defensive performance that I’m looking for.”