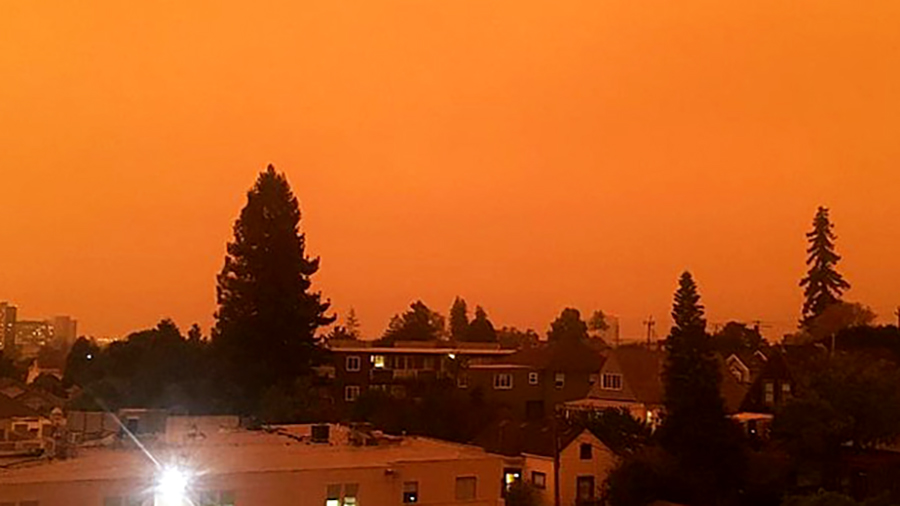 A California wildfire in 2020. (Photo via Wikimedia Commons)

Wildfires have raged across the state of California for months, leaving thousands of acres of destruction in their aftermath. Blazed trees and plants, smokey ash, burnt-down homes and cars, mass evacuations and an orange-red haze in the sky might sound apocalyptic, but they’re all typical of wildfires on the West Coast.

The effects of these fires run deep for Californians, many of whom may have lost their homes or loved ones in the process. And some University of Maryland students have also felt these effects.

For Aadria Bagchi, who lives in the Bay Area, wildfire smoke changes the color of the sky near her home. The sophomore computer science major remembers going home from college once and receiving an email warning her that her home was in a potential evacuation zone.

“The sun was orange and the skies were gray, we didn’t see blue skies for weeks,” she said.

With wildfires continuously burning across her home state, Bagchi is thankful she’s in Maryland, but she worries for her friends and family when the air quality index reaches dangerous levels.

When she calls back home to her parents, she hears about the smell of smoke outside and sees it via FaceTime.

Bagchi’s friend from her hometown also visited Maryland recently, and Bagchi said the first thing her friend noticed was how blue the sky was.

“I was like, ‘Oh my gosh, that’s how bad the situation is in California,’” Bagchi said.

Currently, the state of California is facing 13 major wildfires, with the Dixie Fire nearing 900,000 acres in the northern part of the state, according to records maintained by the state’s Department of Forestry and Fire Protection.

California, where wildfires are most common in the United States, has experienced 7,099 fires across the state in 2021 as of Friday, according to the department, affecting more than 1.9 million acres of land.

In California, the use of prescribed fires — small fires to burn litter in the forests — help prevent larger fires, he said. And in the past few years, fire management teams haven’t been performing the prescribed fires, which is “part of the reason they’re so bad now,” Giglio said.

Increased development and industrialization not only contribute to climate change, but they are also leading factors in the spread of wildfires. California residents tend to build on more susceptible land without knowing, Giglio said.

As global climate change worsens, rain patterns may fluctuate, which can negatively impact vegetation growth, Giglio said. Plus, inconsistent rain paired with an increase in droughts makes the land in California more susceptible to wildfires.

Jade Blum, a California native, is familiar with what wildfires might bring. Blum grew up in the shadows of wildfires across her home state, wearing masks prior to the pandemic to shield her lungs from inhaling smoke.

“I remember being in the high school classrooms checking the weather app that says the air quality, and some days it would just get worse and worse,” recalled Blum, a sophomore enrolled in letters and sciences.

Originally from Berkeley, Blum mainly experienced poor air quality caused by nearby wirefires. And while her hometown is closer to the Bay Area and not as susceptible to fires, poor air quality often led to cancellations during her fall tennis seasons in high school.

Over the years, wildfires have affected popular tourist destinations such as Yosemite National Park and Lake Tahoe, two of Blum’s favorite vacation spots. When she visited Yosemite one year, she said there were noticeable differences in the condition of the trees.

“It was just all barren, just like black tree trunks,” she said.

This summer, Lake Tahoe experienced wildfires that were more damaging than in other parts of California, and residents asked tourists not to visit, Blum added.

Emily Brownfield, who spent her summer in Sunnyvale, California, was greeted with dead trees when she visited Lake Tahoe. The eerie sight was something she had never expected to see during her first trip to California.

“When I was going through Yosemite and Lake Tahoe, I could see all of the remaining dead trees,” the junior mechanical engineering major said.

Blum said she feels detached from her home living in Maryland for most of the year, adding she’s often not there facing the brunt of the fires’ impact.

Since her friends and family still live in California, she said she worries about the lasting effects of wildfires.

“It’s been getting worse and worse every year,” she said.