Review: What Townscaper lacks in purpose, it makes up for in possibility 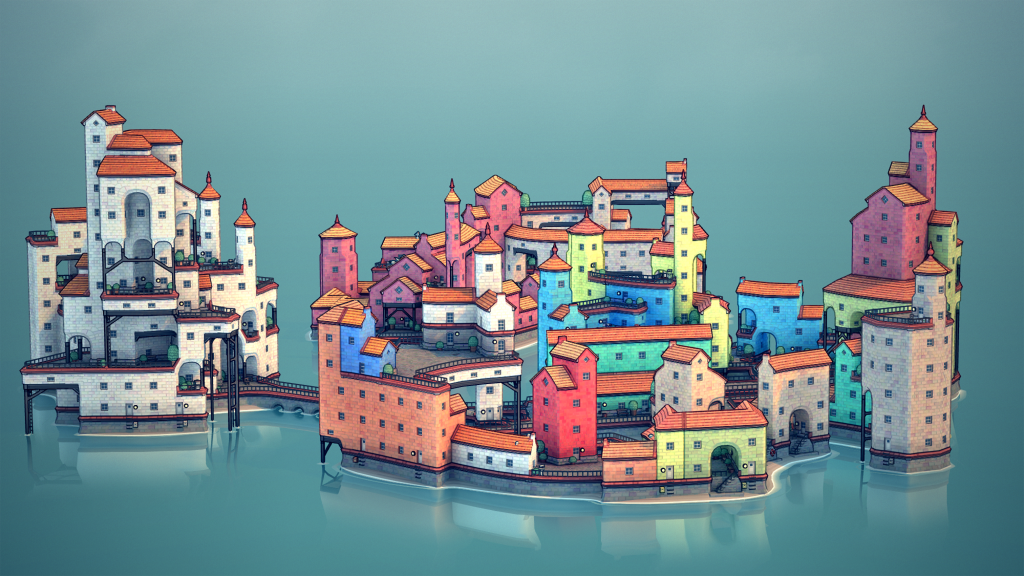 The game is a “passion project” and “more of a toy than a game,” according to the product description.

Upon opening the game, users see an expanse of placid ocean with a few stock structures to get them started. Then, it’s a left click to place a block and a right click to delete.

The buildable grid expands as the creation grows, though a limit does eventually appear. The grid itself isn’t standard. Straight rows and columns would be boring and unrealistic for a seaside abode. The grid sprawls in playful curves enticing the user down unique paths where the structures can adopt personality in their individuality.

This game could be poorly described as Minecraft-adjacent, only because of its focus on building and creativity. But Minecraft has the user pick which block goes where, and Townscaper only provides color options and those two buttons: place and delete.

When you place a block, its shape and décor are informed by the blocks around it. Building three blocks high on one space automatically creates a cylindrical tower. Removing blocks from the middle of a big complex can create arches. Aligning many roofs on the same plane turns them all into terrace space with plenty of little potted plants. The entire space is reacting to itself and its potential for endless experimentation is where Townscaper really shines.

The game is devoid of any purpose or pursuit. There is no investigating the return of the dragons or chasing the scent of lilac and gooseberries. There is only a sea with the occasional ripple from falling cobblestones. Perhaps that makes it boring on some level, but it is certainly refreshing to see a game that doesn’t try to finagle users’ dopamine systems with shiny gold stars to plump microtransaction numbers.

Behind the construction of island shanties and mansions are soft ocean sounds and a plucky sound effect for placing and destroying houses.

Townscaper is now available on Steam and Nintendo Switch for $5.99 with plans to release on mobile soon. The minimal menu interface, holding previous loads and screenshot options, should port well onto mobile. Considering how little is in the game, a relatively great amount of real estate is dedicated to a system to change the position of the sun to take the best screenshot.

Longevity probably won’t be Townscaper’s legacy, but it is a relaxing experience and makes a great decompressing activity after a long day of class. It could also be used to create picturesque screensavers, as it presents more as a canvas for the user rather than a full game.

Townscaper is an experience unlike anything else. While it is without point or story, it’s not without heart and ingenuity.