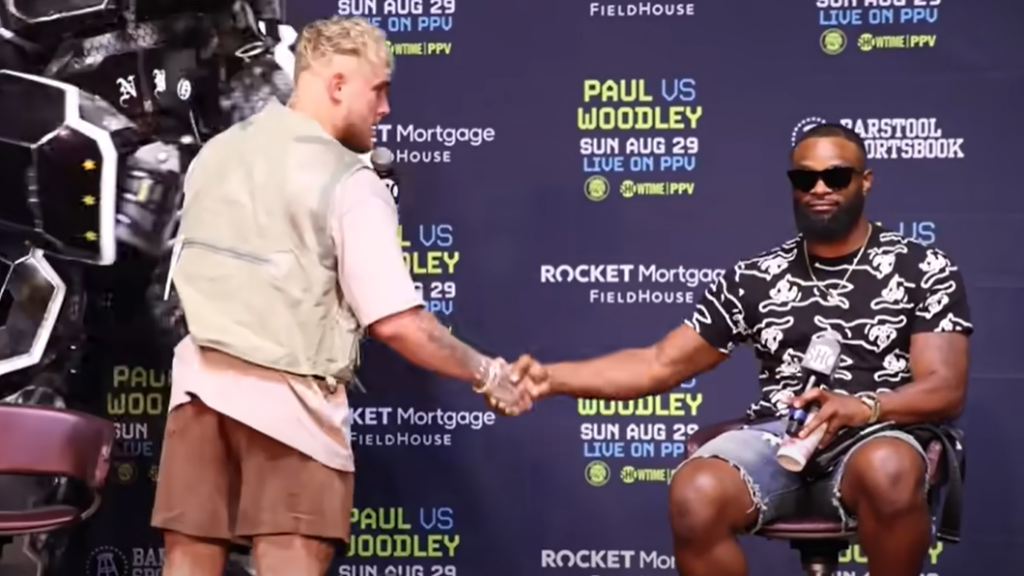 Jake Paul, a 24-year-old YouTuber and giant disruption to the boxing world, came away from his fourth professional matchup Sunday with a split decision victory.

Paul fought UFC welterweight champion Tyron Woodley, 39, at Rocket Mortgage FieldHouse in Cleveland. This event, like each one before it, came with plenty of smack talk and self-promotion from the internet star.

At a news conference before the fight, Paul proposed a bet where the loser would get a tattoo proclaiming their affection for their opponent. On Monday, Paul tweeted some stipulations for Woodley’s new “I love Jake Paul” ink, including a minimum size of three inches and that it’s visible in shorts and a T-shirt.

[Where (not) to go to the bathroom at UMD]

Paul’s demeanor and marketing strategy are informed by his YouTube career, where he thrives on drama, conflict and squeezing every ounce of content out of what he does. His latest fight against Woodley turned into 13 individual videos on his channel, which has over 20 million subscribers.

Reminiscent of his pranks and vlogging drivel, Paul also nabbed professional boxer Floyd Mayweather’s hat during a news conference in May. He went on to make a fake apology video, get a memorializing tattoo and create an online store with “Gotcha Hat” merch.

Paul launched an anti-bullying charity this summer called Boxing Bullies. On his online store page, shirts with the charity’s logo are populated next to ones touting Jake Paul as a “problem child.” The latter is certainly a concise summation of his reputation. He seems to completely miss the irony in putting that next to an anti-bullying campaign after yanking a hat off a man’s head and sprinting away yelling “gotcha hat!”

He then tried the same stunt with Woodley — so if he isn’t mature or professional, at least he’s maintaining a consistent brand.

Paul isn’t exactly the knight in shining boxing trunks whose charity will end bullying. He is a newcomer to the sport who brought a huge following with him and his boyish escapades in immaturity are outshining his admittedly considerable talent.

Boxing is a sport of showboating to a degree. Ceremonial weigh-ins and tense face-offs precede every event. Though there is no question Paul can give and take in the ring, that isn’t where he shines most. His built-in fan base and his unrivaled penchant for dramatization turn his boxing matches against retired MMA fighters into huge money-makers.

He even posted a 40 second video on YouTube dedicated to recounting the $65 million generated from his first-round technical knockout of retired UFC fighter Ben Askren.

On MVP “Face 2 Face” with Ariel Helwani, Paul admitted he chose to fight Woodley because “he’s the perfect body to add content to my highlight reel.”

Woodley is also 15 years older, four inches shorter than Paul and this was his boxing debut, giving Paul the age, height and experience advantages. But those advantages had nothing to do with Paul’s choice — it was purely aesthetic.