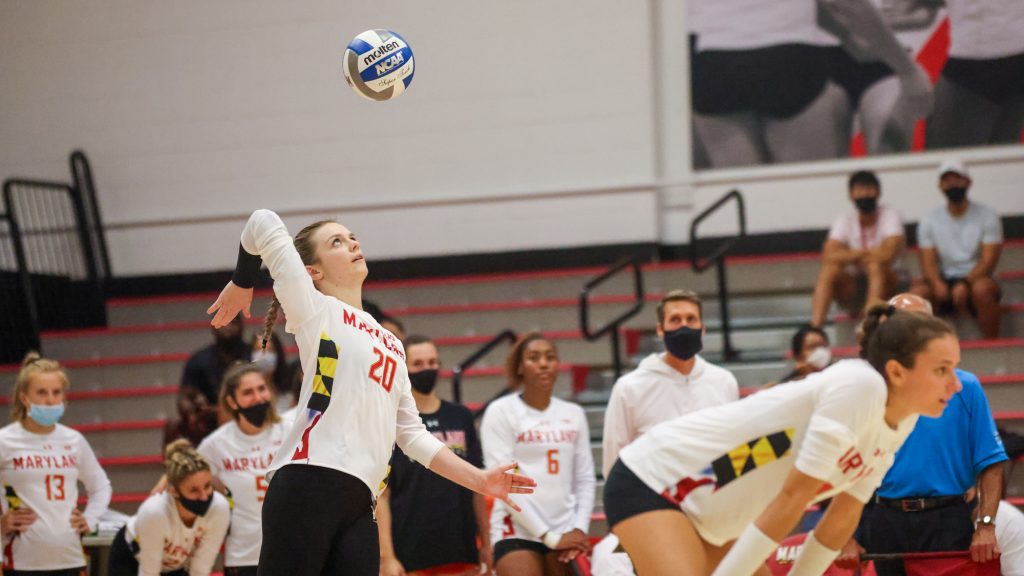 After an Ana Martinovic spike attempt late in the third set was walled by Rainelle Jones and Sydney Dowler, Jones pumped her fist in celebration, chest-bumping Kaylee Thomas as the rowdy Xfinity Center Pavilion crowd showered her team in applause.

It was the apex of an utterly dominant day for Maryland volleyball, which swept both Central Connecticut State and Hofstra, 3-0, in back-to-back matches to remain undefeated on the young fall season.

“Proud of the group,” coach Adam Hughes said following the wins. “Kind of an adversity-filled weekend, lots of curveballs thrown our way, and I thought they handled it very well.”

Central Connecticut State gave the Terps a bit of a scare early in the first of Maryland’s two matches, as senior outside hitter Emma Henderson racked up four first set kills to push the pace for the Blue Devils.

Despite out-killing the Terps 14-12 in the opening frame, it wasn’t enough to steal a 1-0 lead from Maryland.

After a CCSU serve attempt late in the set clipped the net and rolled over to give the Blue Devils multiple set points, Hughes called a timeout to talk things over with his team.

Following the break, a crosscourt Sam Csire spike followed by multiple Cara Lewis stuffs at the net flipped the script in the Terps’ favor, as Maryland snatched a 1-0 lead out of CCSU’s grasp with a 26-24 first set victory.

From then on, it was all Terps in Maryland’s first of two matchups of the day.

Csire came to life in the second set, executing a barrage of kills to gift her team an early cushion in the frame. Lewis was similarly surgical, succeeding on three of her eight total kills as the Terps breezed to a 25-15 second set victory.

With all the momentum following a commanding second set win, Maryland replicated its dominance in the subsequent frame.

The Terps’ defense continued to harden, as the combination of Jones and Dowler registered back-to-back blocks to stretch a late Maryland lead. With five Terps accounting for five or more kills in the match, they gave their bench some shine en route to a 25-16 third set thrashing of the Blue Devils.

So, following a 3-0 sweep of Central Connecticut State to open the afternoon, Hughes’ squad had just five hours to recover before its 7 p.m. matchup with Hofstra. And with two matches in two days under its belts, Maryland picked up right where they left off.

Bolstered by six first set kills from Csire and four stifling rejections from Laila Ricks to open the contest, the Terps raced out to a 25-18 first set victory against the visiting Pride, setting the tempo for the remainder of the contest.

“I feel like we talked a lot about family and support,” Jones said. “I feel like we’re supporting one another … communicating on what we did wrong.”

Maryland’s stranglehold on their evening match would become even more apparent in the second set, as the Terps won 11 of the first 12 points of the frame to build a colossal lead over Hofstra.

The Pride fought valiantly, at one point cutting a 12-point deficit down to seven behind a long service rotation from Martinovic. But it wasn’t enough to stop Maryland’s roll.

With Jones and Csire continuing to find the holes in Hofstra’s defense, the Terps cruised to a 25-15 second set win, sending the Pride limping to their bench in a two-set hole.

Now firmly in the driver’s seat, Maryland’s dominance all afternoon would only continue. With Csire up to 15 kills on the evening, a down the line putaway from Ricks ended what was a wire-to-wire victory for the Terps, who finished their long day without dropping a set.