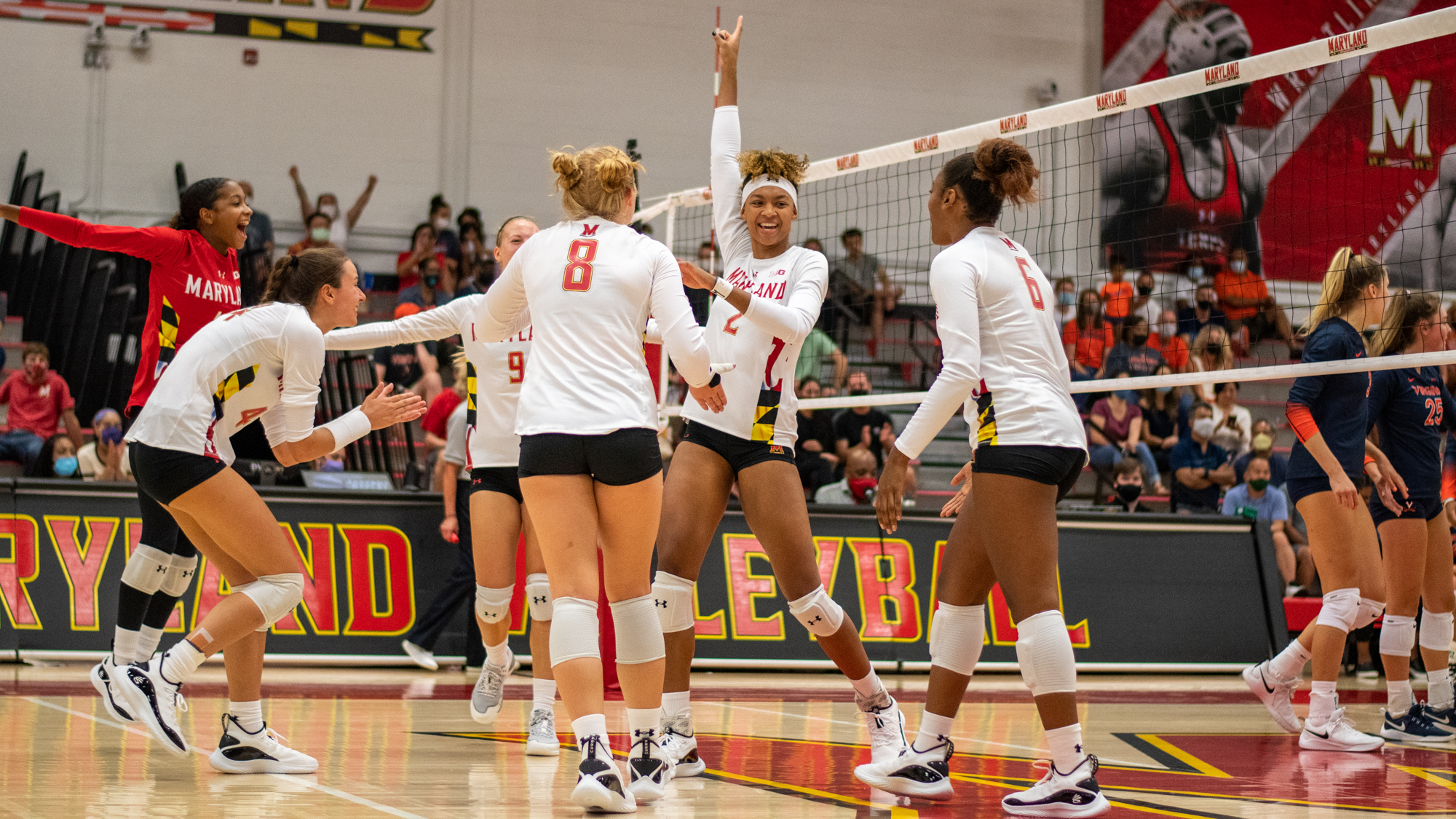 Virginia libero Madison Morey lobbed the ball high into the air, hoping to stave off a match point with a spiraling serve attempt in the direction of Maryland volleyball’s outside hitter, Paula Neciporuka.

Neciporuka eyed the serve attempt, then deftly sidestepped the errant ball to allow it to float wide of its target, sealing the Terps’ first win of the season.

“I mean honestly, looking at it as a whole, it’s probably my favorite win here at Maryland,” coach Adam Hughes said following the win, “partly just it’s a new roster, a lot of new additions, I think the camp has been really good.”

Freshman outside hitter Erin Morrissey got the ball rolling for the Terps early, erupting a raucous Maryland crowd with a sizzling down the line spike to open the match.

The Xfinity Center Pavilion’s palpable energy was soon stifled though, as Morrissey crumbled to the floor just moments later with an apparent left leg injury that sidelined her for the remainder of the contest.

“[The team] dealt with some serious adversity when we first start the match with an injury,” Hughes said, “and had every reason to find excuses with a delay of the match… [but] we never kind of let up.”

The second set of action mirrored the intensity of the first, with both squads trading leads in a back-and-forth slugfest.

Virginia outside hitter Grace Turner led the charge for the Cavaliers, accounting for three of her 13 kills in the second frame to give her squad an edge throughout the set. And while Csire parried with five kills of her own to lead the Terps, it wasn’t enough to keep Virginia at bay.

Following a Mary Shaffer kill that pushed the second set to the brink, an errant Csire spike caused the Cavalier bench to explode, as Virginia pushed the match to a draw with a 25-23 second set victory.

Quickly putting the second set in the past, Maryland swung back at the Cavaliers to open the third set. With Dowler back at the service line, the Terps rattled off five straight points to send Virginia jogging to its bench.

Newly acquired outside hitter Neciporuka continued Maryland’s aerial assault throughout the frame, succeeding on an array of third set kills to push the pace for Hughes’ squad.

With the Cavaliers posting an abysmal .097 hitting percentage and the combination of Neciporuka and Csire up to 17 kills through three sets, the Terps never trailed in a wire to wire 25-19 third frame victory.

And with just one set in the way of an opening-night win, Maryland kept its foot on the gas.

Csire continued to impose her will on the Virginia defense, racking up four more kills to finish with a match-high 13 spikes on the evening. And as Morey’s final serve flew wide, the Terps had their first victory of the season in the books.

“The last two sets, I felt like we were kind of in control,” said Hughes, “for a young group, that’s a gutty win, a gritty win.”