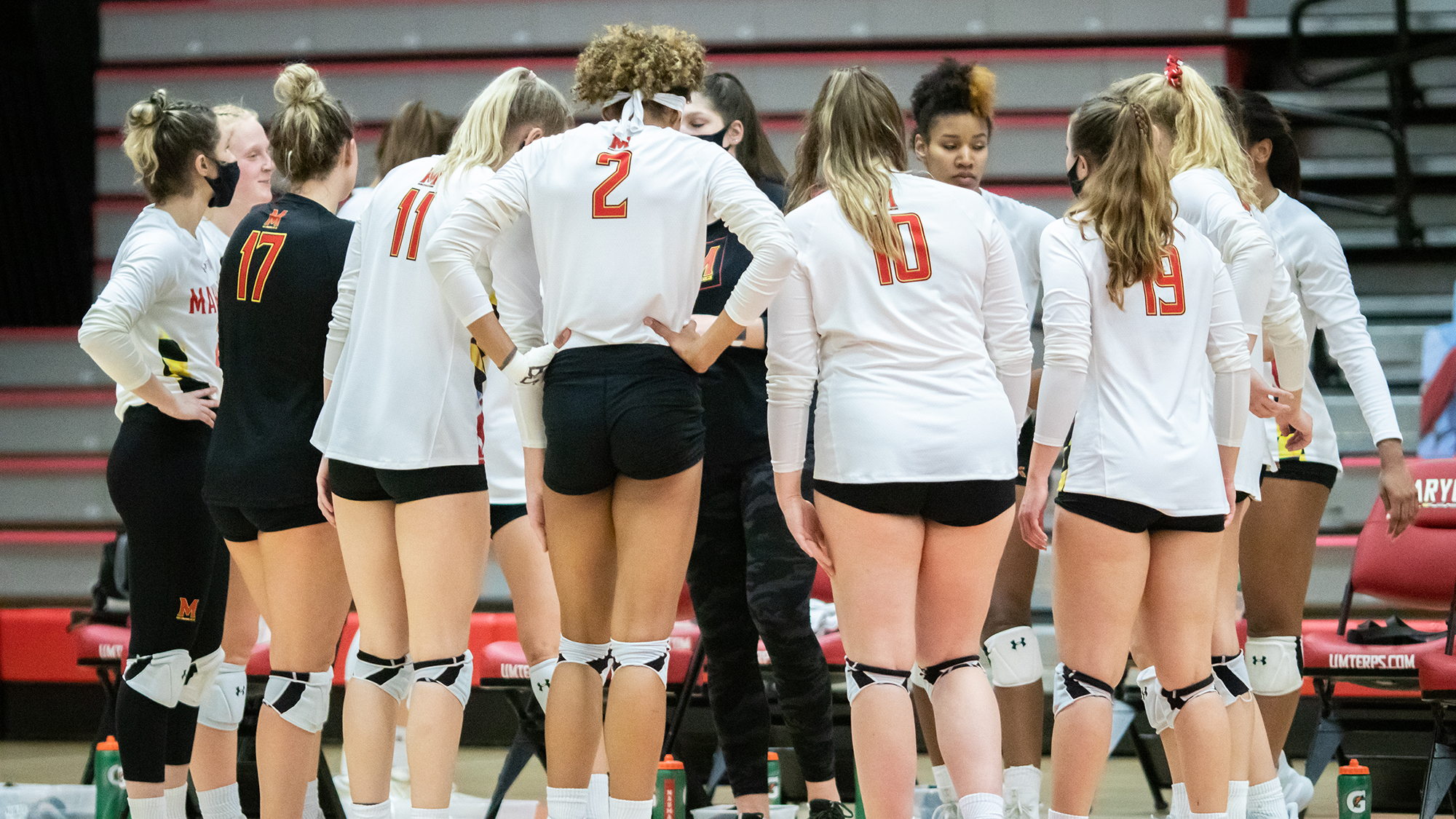 Maryland volleyball huddles during its 3-1 loss to Rutgers on March 24, 2021. (Julia Nikhinson/The Diamondback)

Following a truncated offseason in which Maryland volleyball lost a handful of its former starters, coach Adam Hughes and the Terps were forced to adapt on the fly.

Turning to the transfer portal, Maryland reeled in nine newcomers to the squad. And despite the immense challenges brought on by a four-month offseason, Hughes and the Terps are confident in their preparation for their upcoming slate.

“It’s been a really nice blend from some of the core who have been here for a bit and helping the younger players,” Hughes said. “I think the last few weeks have been great.”

Among Maryland’s veteran leaders is middle blocker Rainelle Jones, who enters her senior season after a dominant defensive campaign this past spring.

Jones, who averaged 1.44 blocks per set last season, will look to captain a defense that finished atop the Big Ten blocking leaderboards, despite finishing just 5-15.

“[Jones has] done a really good job using that maturity, and she’s someone that a lot of people look up to,” Hughes said. “She’s always got a smile on her face, and she’s really good with her process.”

For Jones, leading a defense speckled with new faces will be an interesting challenge as the season begins.

“I feel like the defense, we definitely have to work on it,” Jones said following the Terps’ Red-White scrimmage. “No matter what, it’s always a thing that we have to improve on.”

Despite these obstacles, Jones projected confidence in the team’s chemistry even with the abundance of new players.

“With our back row, they’re doing great communicating with all the people we have coming in,” Jones said. “Milan [Gomillion] and Kaylee [Thomas] are bringing tons of fire — and on the blocking side of it, we just have to remember the tiny little fundamentals that we’re working on in practice.”

Defensive specialist Lexy Finnerty, who will look to have an increased role in Maryland’s offense following the departure of libero Sam Burgio, was similarly confident following last Saturday’s scrimmage.

“We had limited time, but when we all got back into the gym this summer, we all knew we had a lot of big goals in mind, and we went right to work,” Finnerty said. “I think we had a great preseason and offseason.”

So, for the first time in over a year, the Terps will play a non-conference schedule. Maryland opens Friday with a home showdown with Virginia.

And after just 146 days to prepare for their fall 2021 slate, the Terps are optimistic for far less turbulence and far more fans packing Xfinity Center Pavilion.

“[I’m] happy that we’re here playing in front of fans again,” Hughes said. “It is nice to get a little sense of normalcy, especially with a really young team.”