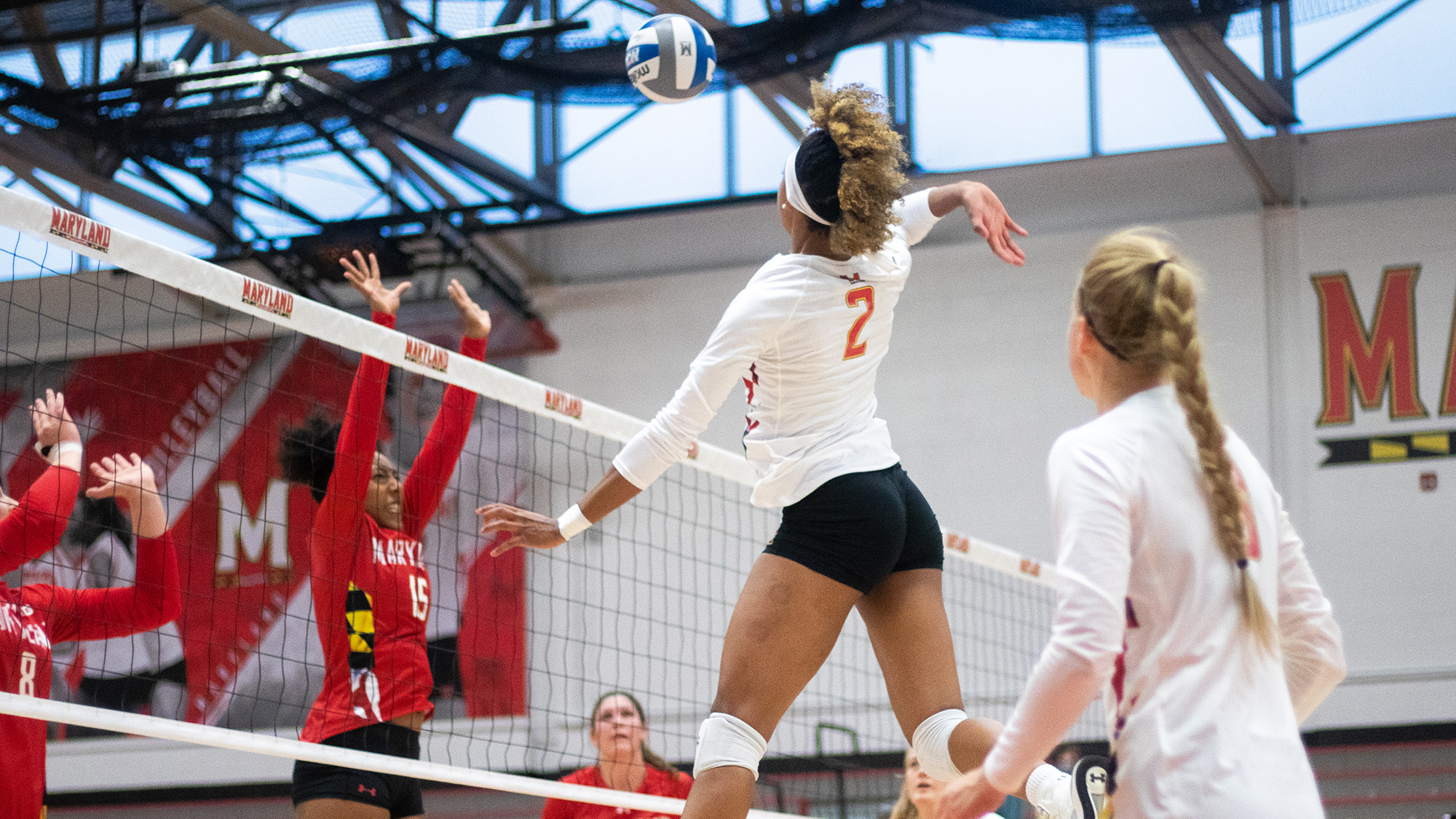 After a thunderous putaway from Sam Csire brought an abrupt end to Maryland volleyball’s exhibition match, both squads met together at midcourt to link arms and sing the Terps’ renowned fight song.

It was the culmination of a night flooded with competition, as coach Adam Hughes and his team took the chance to unveil their revamped 2021 lineup in the annual Red-White scrimmage.

Spectators had the chance to see multiple iterations of the squad, with teams mixed up after every set.

“First and most important, happy that we’re here playing in front of fans again,” Hughes said. “It is nice to get a sense of normalcy… especially with a really young team.”

Here are three takeaways from the scrimmage, which the Red and White teams fought to a 2-2 tie.

The Terps’ defense returns to form

It was middle blockers Rainelle Jones and Cara Lewis that got the ball rolling for the Terps early, each accounting for multiple blocks for their respective squads to open the scrimmage.

Jones, who enters her senior year following a top-five blocks per set finish in the Big Ten last season, impressed the rowdy Xfinity Pavilion crowd with a barrage of stuffs at the net, willing her squad to an early advantage.

“[Rainelle] is one person who has played in front of full fans before, she’s played in all of the Big Ten arenas,” said Hughes. “She’s done a really good job using that maturity, and she’s someone I think a lot of people look up to.”

But it wasn’t just Jones and Lewis that did damage from a defensive perspective. Newly-transferred middle blocker Hannah Thompson also chipped in at the net, along with key contributions from sophomore Laila Ricks and freshman outside hitter Erin Morrissey.

“On the blocking side of it, we just have to remember the tiny little fundamentals that we’re working on in practice, and recognizing who we’re playing against every single match,” Jones said.

Entering her second season in College Park at outside hitter, Sam Csire put her entire offensive arsenal on display in a dominant performance.

Starting out on the red team next to setter Sydney Dowler, Csire skied for three early kills, slicing through a tough Maryland frontcourt to propel her squad early in the contest.

Csire’s effectiveness from the outside paid dividends, as her team snagged the first two sets in comfortable fashion, before Csire swapped jerseys and defected to the white squad.

“[Csire] performed well,” defensive specialist Lexy Finnerty said. “She’s been putting in the work with her progress during practice and I think that paid off tonight.”

And despite switching sides midway through the contest, Csire’s dominance over the opposing defense only grew.

Using a mix of both powerful and off-speed kill attempts, Csire wreaked havoc throughout the scrimmage, to the delight of her head coach.

“I think she played with a little bit more poise and confidence,” said Hughes. “I thought she was more patient and [took] what the defense was giving her… I thought she had an outstanding night.”

With the recent departure of Erika Pritchard looming large, Csire’s offensive finesse was a welcome sight for the Terps ahead of their Aug. 27 opener against Virginia.

In addition to being a valuable scrimmage for Maryland’s returning players, the Red-White scrimmage also gave Hughes and the Terps a glimpse at their newly acquired talent.

Freshman Milan Gomillion played valuable minutes for the Terps in her unofficial debut, splitting time at libero with both Finnerty and senior Maddie Naumann.

Outside hitters Morrissey and Paula Neciporuka also got an array of offensive touches, showing flashes of firepower alongside middle blockers Thompson and Ellie Watson.

For Hughes, Friday’s game proved just how deep Maryland’s bench can be this season.

“One thing that we now have is more depth than we probably started with which has been really nice,” Hughes said. “I don’t know that we’ll have a set lineup for most of the year, I think there’s going to be people that are going to have hot hands, and we’ll be able to ride those guys.”

So, while Friday’s Red-White scrimmage didn’t answer every question from a team coming off of a 5-15 season, the Terps are confident it was a step in the right direction.

“It was awesome, I think we had a lot of good connections and good energy,” Finnerty said. “Obviously there’s a lot we can improve on, but I think it was a good first start.”