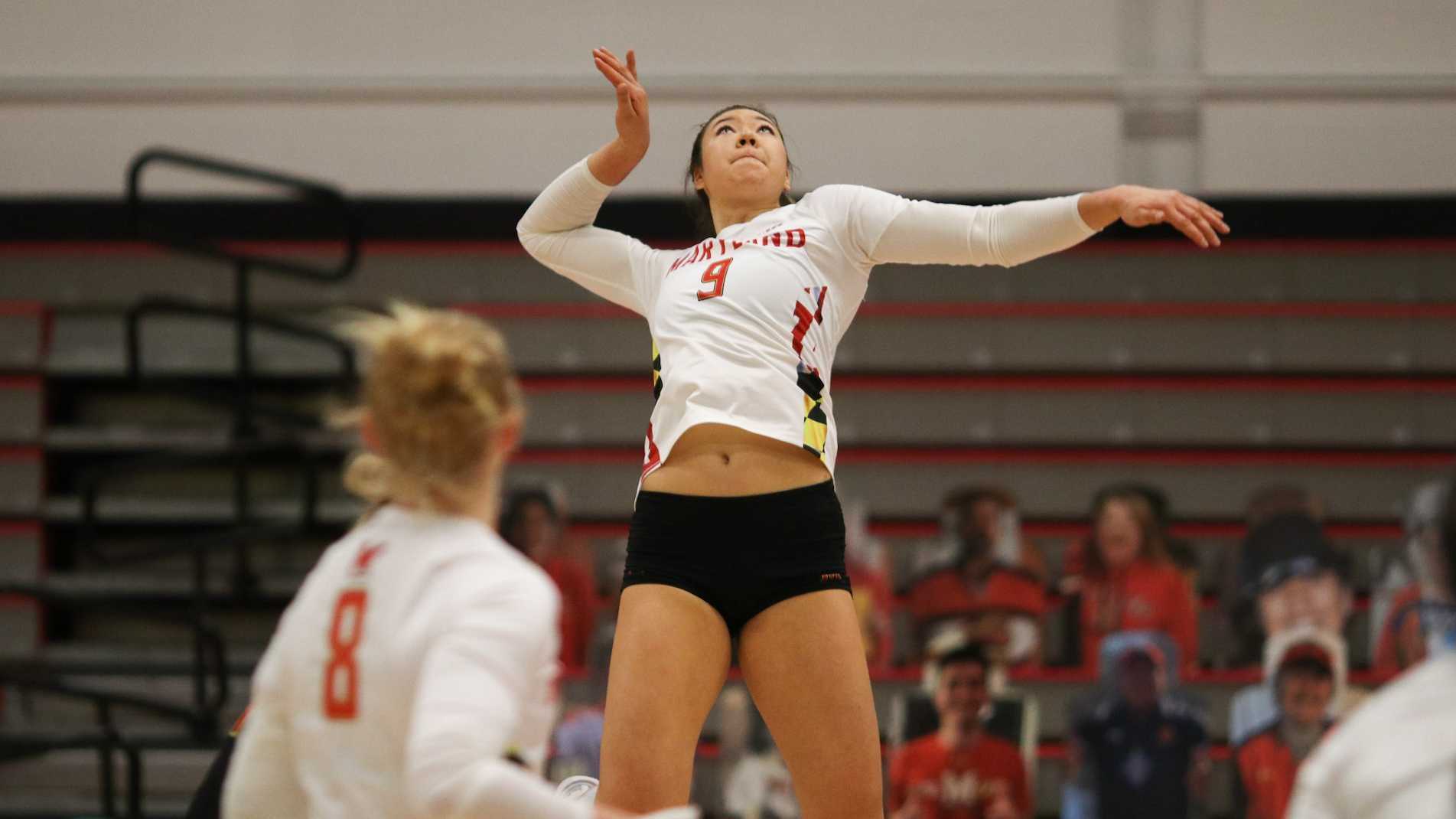 The tension was palpable in College Park.

After dropping the first two sets handily to the visiting Wildcats, Maryland volleyball had roared back to even the match at two frames apiece, hoping to end its season with a sweep of Northwestern.

With the deciding fifth set knotted at 12, however, the Terps’ comeback efforts fell just short. A solo block tooled by Alana Walker was followed by a Charlotte Cronister service ace which pushed the Wildcats to the brink of victory. And a tipped ball that floated past Maryland’s defense on match point sealed a season-ending 3-2 loss for coach Adam Hughes’ squad (25-20, 25-19, 13-25, 22-25, 15-13).

“Disappointed obviously, not able to get the result we wanted for the seniors, but I’m not disappointed in their fight and the team’s effort,” said Hughes.

Following an emotional senior ceremony that highlighted the careers of Maryland’s departing senior class, it was the Terps’ experienced veterans that got the ball rolling to open the evening.

It started with libero Sam Burgio, who gouged Northwestern’s defense with back-to-back service aces to give the Terps an early 3-0 lead. Then, it was Erika Pritchard’s turn to assert her dominance.

Pritchard, who has the second most kills in program history, pitched in three putaways to lead the Terps in the frame.

However, the considerable output from the departing seniors wasn’t enough to push Hughes’ squad over the top in the opening set.

Northwestern’s Abryanna Cannon, who finished with double-digit kills in Friday’s matchup, continued her roll with a six-kill first set outburst, a set in which her Wildcats committed just four attack errors.

And despite a mini-run spurred by blocks from Laila Ricks and Cara Lewis coupled with an 11-dig set from Burgio, the Wildcats would not be denied in the first. After an Alex Rousseau set was pulverized by Nia Robinson to give Northwestern a set point, a service ace by Rousseau clinched a 25-20 first set victory for the Wildcats.

After hitting an inefficient .026 hitting percentage in the opening frame, Maryland’s offensive woes carried over into the second set of action.

With the second set knotted at five, Pritchard committed a service error. A Northwestern service ace on the next play gave the Wildcats a two-point lead, which opened the floodgates for Northwestern’s outside hitters.

Now on the verge of being swept in their final contest of the season, the Terps came out firing on all cylinders to open the third set.

That lead would only balloon, thanks in no large part to a six-kill outburst from Pritchard. With Maryland’s lead now up to ten late in the frame, a floated Nicole Alford set was crushed back across the court by Pritchard, igniting Maryland’s bench and family-filled crowd.

And just points later, a Pritchard tip dropped between three Northwestern defenders, cementing a statement set win for the Terps: a 25-13 throttling of the Wildcats to halve their two-set deficit.

“I think especially the first set we were a little emotional obviously, and I think our emotions got the best of us, tightening us up.” Burgio said. “And then by the third set we were able to just have fun with it.”

With momentum firmly back in the hands of the Terps, Maryland’s conference-leading blocking unit hardened in the fourth frame.

Led by the defensive duo of Ricks and Lewis, the Terps opened up a seven-point lead, jumping out of the gates with a plethora of stuffs between the two middle blockers.

Northwestern’s Rousseau led a block party of her own, quickly gashing into Maryland’s advantage. The Terps’ seven-point lead quickly turned into one, and after an overturned call gave Hanna Lesiak yet another kill, the set was square at 16.

Despite the mid-set lull for Hughes’ squad, however, Pritchard and the Terps quickly regained form. After losing eight of the previous nine points, Maryland went on a 7-1 run of its own, taking back control of the set. And with the Terps on the brink of forcing a fifth set, a sizzling Sam Csire spike gave the Terps the fourth frame, 25-22.

So, for the second time in 24 hours, the Terps and Wildcats would play a five-setter in College Park.

But this time, it was Northwestern that flexed its collective strength. Maryland was on top early, racing out to a 10-7 lead. But the Wildcats recovered, winning eight of the last 11 points to take the set — and the match.