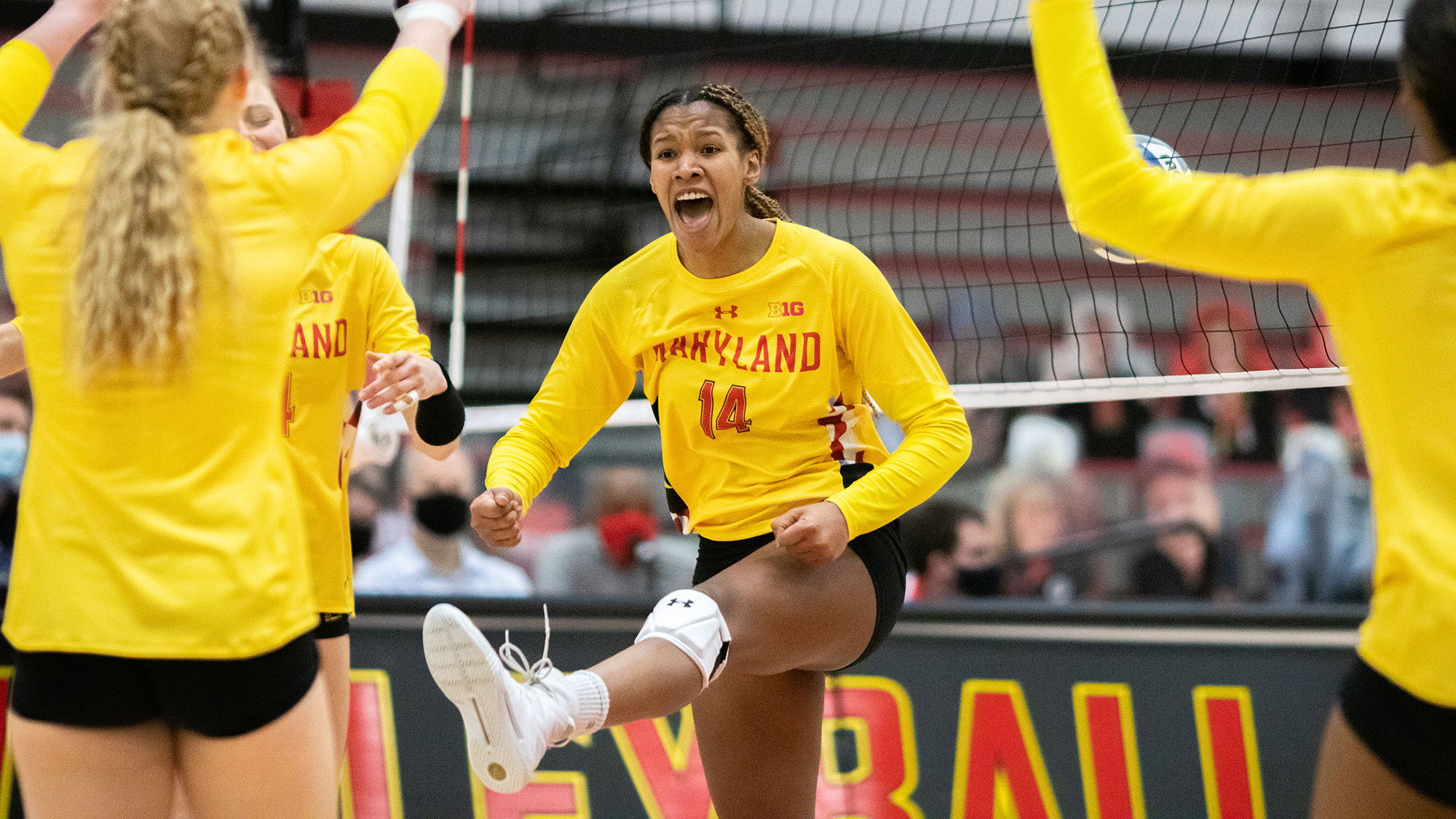 Deep into the deciding fifth set of action, Maryland volleyball middle blocker Laila Ricks launched off the ground from her position on the wing. A Sydney Dowler set was deftly placed her way, and Ricks prepared to detonate on the Wildcats.

As she reached the peak of her swing however, she realized the threat of two Northwestern defenders loomed large. Ricks contorted midair, sending an offspeed kill attempt softly over the heads of the Wildcats for a late Terps point.

“I’m really proud of the group obviously, not just because of the win but how they got the win.” coach Adam Hughes said. “ I think we did a very good job of just trying to [focus on] ‘what do we need to do to get ourselves back in the match.’”

The Wildcats, coming off of back-to-back home losses to Minnesota, blitzed the Terps in the opening frame. Northwestern nabbed five of the first six points of the match, opening up a comfortable first set lead and forcing coach Adam Hughes to burn two quick timeouts.

And while Hughes’ timeouts stopped the early bleeding momentarily, Northwestern kept its foot on the gas.

Star outside hitter Temi Thomas-Ailara gashed Maryland’s stout defense in the set, accounting for eight first set putaways to lead her Wildcats to a comfortable 25-16 first set victory, a set in which the Terps never led.

After limping out of the gates to open the contest, Maryland found its footing in the second set.

Spurred by a set-opening service ace courtesy of senior Hailey Rubino, followed immediately by spikes from Erika Pritchard and Cara Lewis, the Terps garnered their first momentum swing of the match.

A stark contrast to the lopsided first frame in College Park, Maryland’s defense began setting the tone at the net — with the duo of middle blockers Lewis and Rainelle Jones forming a brick wall to tame a once potent Wildcats offense.

With the Terps clinging to a two point lead late in the second set, Northwestern’s Alana Walker attempted to halve the Wildcats’ deficit with a high-flying kill attempt, only to be shut down by Jones at the net.

Jones’ rejection paid dividends, as Maryland continued to pour it on in the second frame. And after a sizzling down-the-line spike from Pritchard garnered the Terps multiple set points just minutes later, a Northwestern ball-handling error clinched a 25-22 second set victory, knotting the match at one set apiece.

“Honestly, [Erika Pritchard] and I had a talk before the game, you know, we were just like ‘all gas, no brakes’ for our last opportunity to all play together as a team,” middle blocker Cara Lewis said. “We really just gave it our all.”

The third set of action was representative of the match as a whole — a tug of war between two feisty Big Ten squads desperate to notch a victory with the end of the regular season just days away.

The Wildcats struck first, racing out to a 13-7 lead behind seven early service aces to open the frame. Maryland soon bounced back however, behind an outpouring of kills from Pritchard and Sam Csire.

The back-and-forth nature of the third set would continue into the late stages of the frame, as a Lewis and Jada Gardner block assist followed by a rare Thomas-Ailara attack error gave the Terps a late 21-20 lead.

But the Terps faltered late in the frame.

[In the absence of star players, Maryland volleyball has turned to its bench]

A Dowler service error followed immediately by a mistimed Csire kill attempt gifted the lead right back to the Wildcats. And with Northwestern now back in the driver’s seat, two late kills from outside hitter Ella Grbac stifled Maryland’s comeback attempt in a 25-22 third set victory for the Wildcats.

After dropping the third set in heartbreaking fashion, Hughes and the Terps were back in a familiar position –– hoping to force a deciding fifth set down 2-1 against a talented Big Ten foe.

And In nearly identical fashion to the third set, the Wildcats flexed their muscle early, jumping out to an 8-4 lead behind back-to-back Thomas-Ailara service aces.

But this time, the Terps proved up to the challenge.

The comeback started with Pritchard, who logged six of her 16 kills in the fourth frame to claw Maryland out of its early hole. The Terps hit an efficient .393 hitting percentage in the set to turn the tides on the Wildcats, and after Northwestern committed an attack error on set point, the Terps had drawn even in a 25-21 fourth set victory.

Bolstered by its fourth-frame heroics, Maryland raced out in front in the fifth, eventually building an 8-3 lead. And although there was a brief spell of good fortune for the Wildcats — they scored three straight points, two of which came from Terps’ errors, to cut Maryland’s lead to four — it was Hughes’ squad who was bursting with life.

Ricks rose over the mass of bodies to inch Maryland closer to victory. And it was Pritchard who sealed it, rocketing home spike No. 49 to send the Terps into bliss.

“I think that we just stayed steady, and we like kept the same energy going through the fifth set,” said Pritchard. “We just kind of kept that momentum going forward and stayed loose, I think that was the key.”