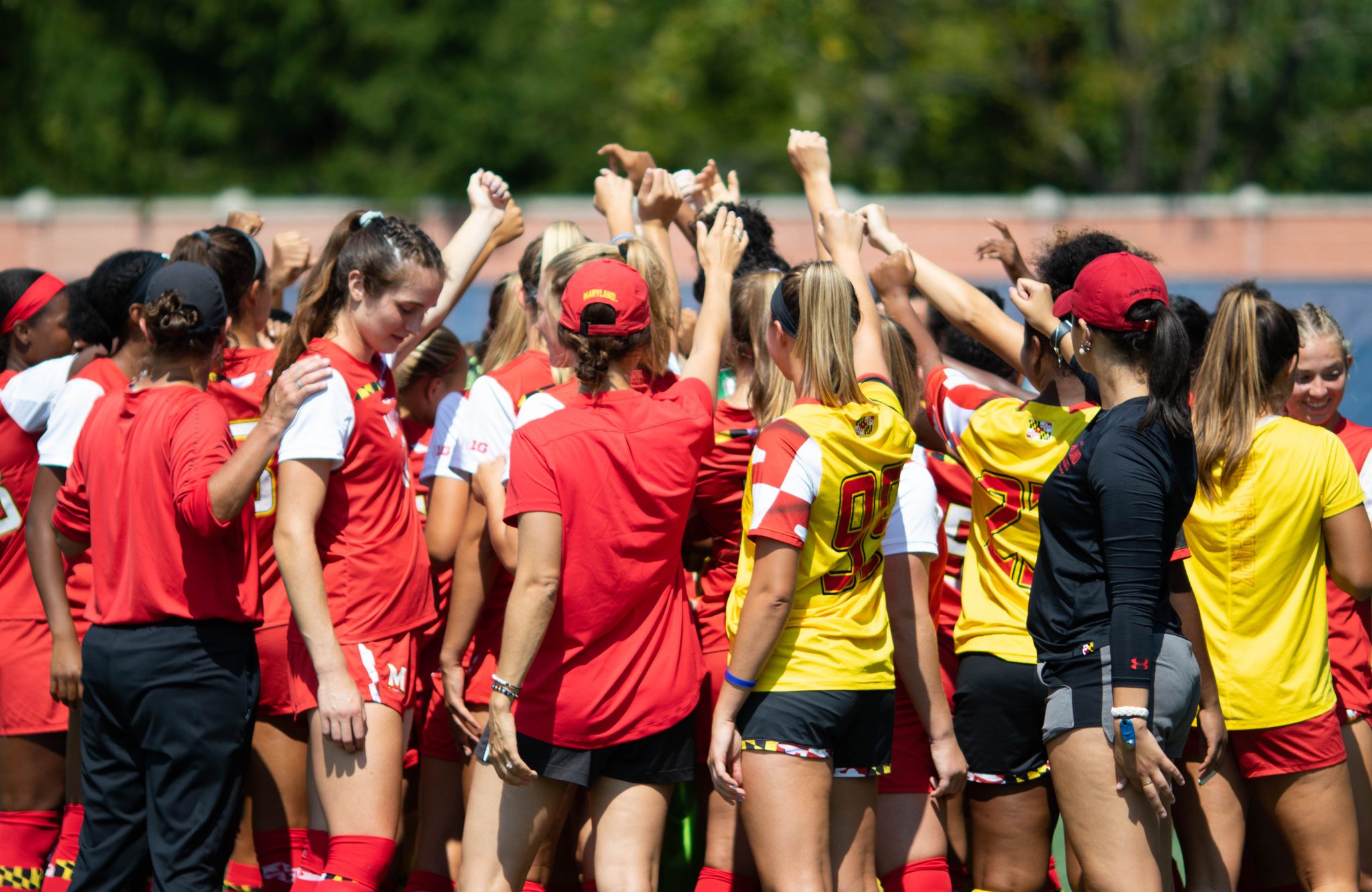 Maryland women's soccer comes together before their 1-1 tie with George Washington on Sept. 8, 2019 in Washington, D.C. (Julia Nikhinson/The Diamondback)

Maryland women’s soccer head coach Ray Leone doesn’t want to dwell too much on the past.

“There’s very little I want to talk about last season. [The players] did the best that they could, we all did the best that we could,” Leone said at a preseason news conference. “We went through an incredible amount and it toughened us all up, and we’re really just ready to put our best foot forward.”

Despite Maryland suffering a 0-10-2 record last spring, its worst record in school history and worst record for conference wins since 1993, the Terps are returning 26 of its 28 players from last season.

And Leone thinks that says a lot about his team.

“If you think about the stress that we had and the difficulties that we went through, maybe a lot of people would say that’s it,” Leone said. “They didn’t. So to return that many, I’m proud of that — that our team is a family and committed to turn it around.”

With a majority of his players returning, Leone is hoping the team can refocus after last season’s struggles to build on the success of their 2019 season, when Maryland made its first Big Ten tournament.

“Now we’re trying to rebuild this team with the same group,” Leone said. “[We’re trying to] rebuild our mindset so that we are more successful with the bottom line, which is results.”

The Terps suffered multiple injuries to key players before the last season had even started, and as the injuries continued to come, Maryland was never able to find consistency.

Despite the setbacks suffered last season, many players are looking to come back in a major way for the Terps.

Malikae Dayes was a player that Leone relied on heavily in 2018 and 2019, as the center back started all 39 games of her sophomore and junior seasons with Maryland.

[After a winless season, Maryland women’s soccer hopes for better days ahead]

Unfortunately, after picking up an injury, Dayes missed the Terps’ first game of the season, returning for about 22 minutes against Purdue before getting injured again. Dayes missed the rest of the regular season, only reappearing in Maryland’s 4-2 loss at Ohio State in the opening round of the Big Ten Women’s Soccer Regional Weekend.

“[Malikae] is a strong leader, a strong player,” Leone said. “She really is the anchor of the team. We have her back there, everyone is playing better.”

Dayes’ sister, Mikayla Dayes, will play a large role in the Terps’ attack after making her international debut for Jamaica over the summer. Leone is excited to see what she brings to the table this season.

“She was one of the bright spots of the season last year. She was relentless, she was willing to do anything in every single game,” Leone said. “I expect her to just pick up where she left off, and she really is in the preseason.”

Maryland will look to Mikayla Dayes, as well as forwards Alyssa Poarch and Keyera Wynn, along with some new additions, to bolster an offense that was only able to find the back of the net eight times in 12 games last season.

The Terps brought five players onto the team this summer, including two incoming freshmen and three transfers.

Notable of the bunch is former Auburn forward Kori Locksley, the daughter of Maryland football coach Mike Locksley. Leone talked about how the Silver Spring native’s familiarity with the program has helped her quickly fit in.

“Kori — she is just doing amazing,” Leone said. “She knew a lot of players on our team, so that really helped us, that she doesn’t feel like a transfer.”

The Terps did suffer a blow this offseason, losing its team leader in minutes, Sydney Staier, to Indiana. The Terps will look to the experienced Hope Lewandoski and sophomore Catherine DeRosa, who played in all 12 games her freshman year, to fill the hole in central midfield.

Maryland’s goalkeeper situation still hasn’t fully ironed itself out, and while there will be plenty of competition with six keepers on the roster, injuries may play a role in how many are actually available this season.

The Terps added graduate student Liz Brucia from Georgia and junior Madeline Smith from Omaha this summer into the keepers room.

Despite the additions, Maryland is still ranked last in the 2021 Big Ten Women’s Soccer Preseason Poll.

The Terps kick off their season at Ludwig Field on Aug. 19 against Temple. Maryland last played the Owls to a 1-1 draw at home in 2019, with Wynn scoring her first career goal as a Terp.

Leone has emphasized what he hopes to get out of Maryland’s non-conference schedule this season, especially in its first two games against Temple and George Mason.

With nowhere to go but up after last season, game one will be the first chance to see who can ignite the Terps in 2021.

“[It will] be important this weekend to see where our fitness is and who’s ready to come in off the bench and make a difference,” Leone said.