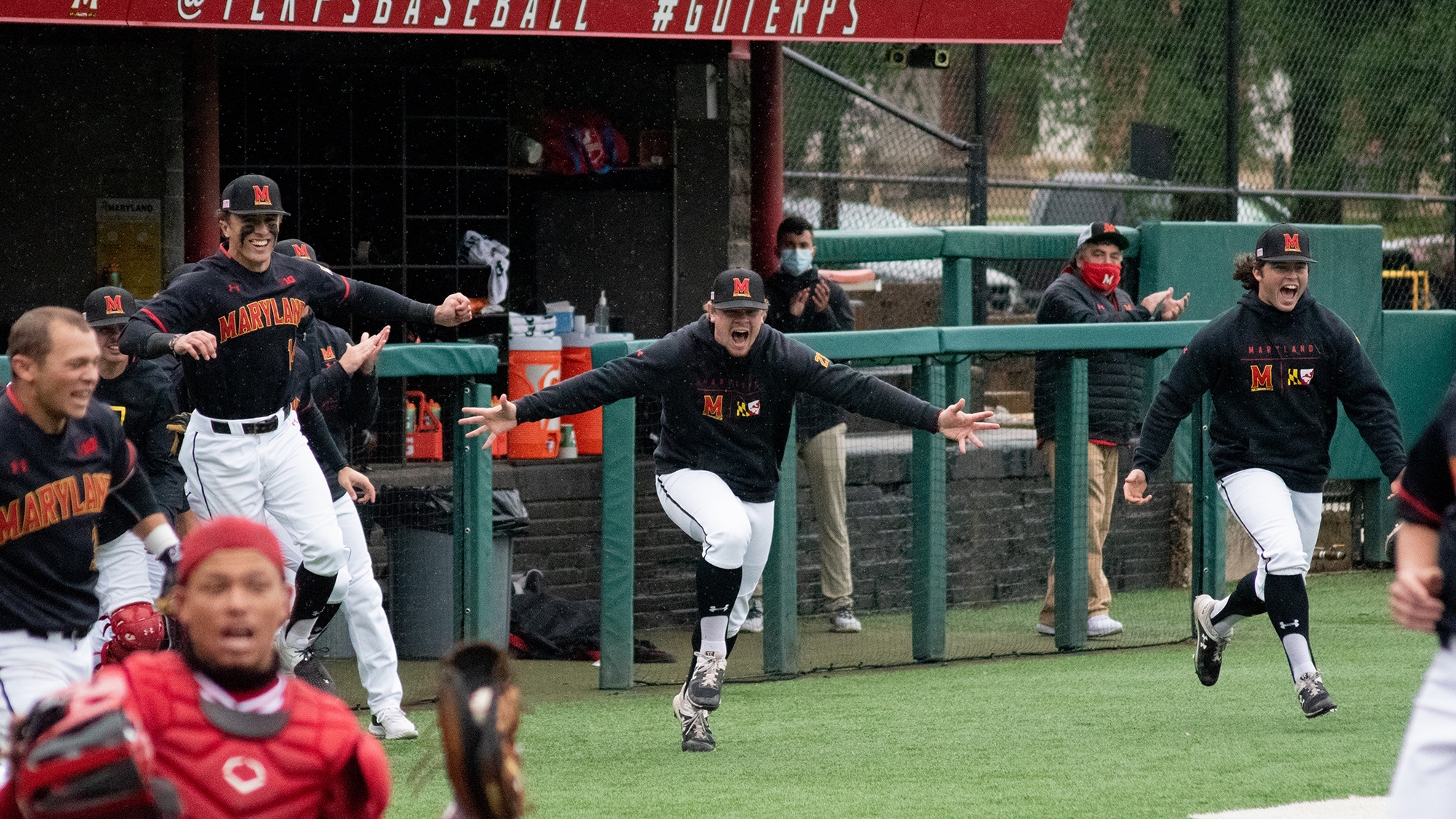 Maryland baseball rushes from the dugout to celebrate a 4-3 extra innings win over Indiana on May 29, 2021. (Autumn Hengen/The Diamondback)

For most teams, a playoff atmosphere only comes around once every June, if at all. For Maryland baseball, it’s been like that every week since starting the first half of the season 10-12.

“It’s been a fun ride with these guys so far from where we started back in March,” coach Rob Vaughn said. “We were 5-9 at one point, in a pretty bad place, to go on quite the run in April.”

Now, Vaughn’s squad faces Charlotte in its first game of the Greenville, North Carolina, regional in the NCAA tournament. The 49ers and the Terps are two of four teams in the section, joining Norfolk State and host East Carolina.

Maryland is playing in a double-elimination bracket, which allows the team to lose once and stay alive. However, the loser’s bracket leaves no room for error.

“We feel very confident that we can go in there and make some noise in this thing,” Vaughn said. “We got three other really good teams in this regional, but we’re excited to be down here.”

[Maryland baseball returns to NCAA tournament for first time since 2017]

And their opponents are definitely notable.

Charlotte and East Carolina have both been ranked nationally at some point this season, while Norfolk State sits on the other end with a losing record in a non-major conference.

Charlotte, with a 39-19 record, is the first roadblock Vaughn’s squad will face in the tournament, and they are not to be underestimated. The 49ers had a notable March win against then-No. 14 Tennessee, and a 4-4 record against a ranked Old Dominion team, though they were swept by East Carolina.

Charlotte is making its first tourney appearance in a decade and is led by Conference USA Player of the Year Austin Knight. He led the team with 61 runs batted in and was a steady hitting presence with a .402 on-base percentage.

[No. 25 Maryland baseball finishes regular season with 7-3 loss to Indiana]

Maryland will be putting the game in the hands of freshman Jason Savacool, as Nick Dean is nursing an injury.

“We’re putting a lot of faith in a guy like Jason Savacool running him out there in game one as a freshman …  but he’s a winner,” Vaughn said. “The moment is not going to get too big for him.”

For their first appearance in the NCAA tournament in four years, the Terps have only one player on their roster with playing time in the postseason: graduate student left-hander Tyler Blohm. He is no longer a starter, but Vaughn’s squad still has the swagger it’s held since the beginning of the season.

If anything, Maryland is more confident than ever.

“We’ve always been a competent team and I think we’re going into this weekend no different than any other weekend,” center fielder Chris Alleyne said.