After more than a year on Zoom, UMD professors are ready to return to the classroom 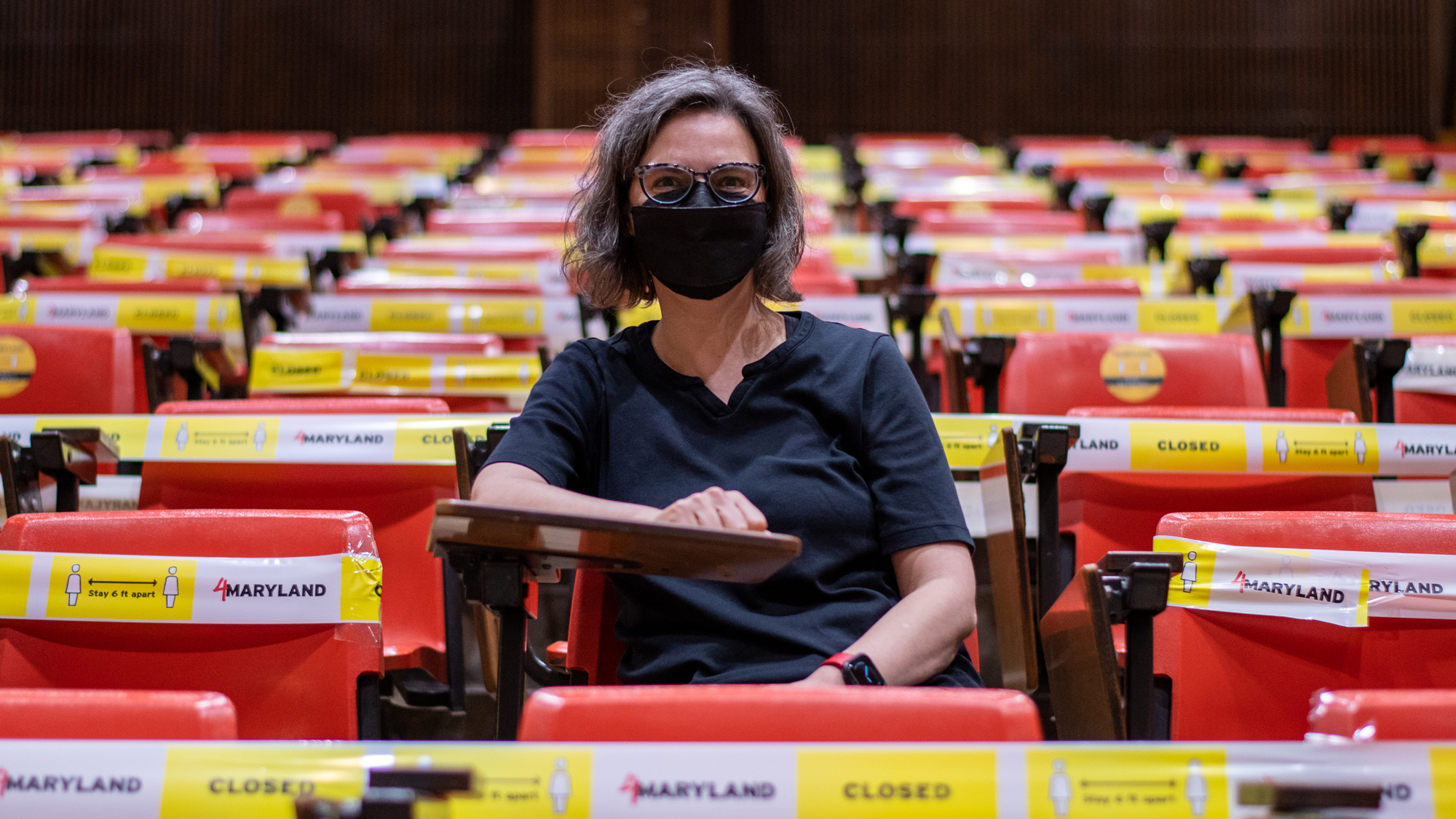 Julie Silva in a lecture hall in LeFrak Hall, where she previously taught before classes moved online. (Joe Ryan/The Diamondback)

Over the past year, University of Maryland associate history professor Stefano Villani has taught some of his classes in-person — but he’s still faced his share of challenges.

His students had the option of going to class in person, but many of them attended through Zoom instead. This proved to be frustrating, he said. There were distractions and technology issues, and since Villani has a strong Italian accent, it was hard to tell whether students were understanding him.

“Online teaching for lecture classes is absolutely useless,” he said. “It’s nonsense and it is not teaching.”

Villani is among the professors who have dealt with a host of teaching challenges brought on by the pandemic. But with the spring semester winding down, professors are setting their sights on the fall semester.

The university has released a tentative reopening plan for the fall semester, anticipating a return to normal operations. And professors are excited.

Julie Silva, an associate professor in the geographical sciences department, had two different sized classes when COVID-19 hit. In one class, she had roughly 200 students. In the other, she only had 20. They ended up being vastly different teaching experiences, which she didn’t expect.

With the smaller class, Silva held more personal relationships with the students. She was able to keep them engaged. The class was also filled with “dark humor” to cope with what was going on.

But with the other class, there wasn’t much she could do, particularly for a lecture-heavy set up. More people stopped trying and without that student-professor relationship, she couldn’t keep them as motivated. With a loss of motivation and students dropping out or failing, the class “unraveled,” Silva said.

“I didn’t think that it would be that different because I don’t find teaching in person, face-to-face, that different,” Silva said.

Matthew Aruch is a senior lecturer at the engineering school, as well as the assistant director of the College Park Scholars Science, Technology and Society Program. He hasn’t taught in person for three years — he was working on his research and raising his son before the pandemic hit — so he’s apprehensive, but ready, to get back.

“I like students, I like being around that kind of classroom environment so it’ll be nice to be back in the classroom and see what happens next,” Aruch said.

Before, he was a middle school science teacher, and he loved how interaction and community of a classroom made it come alive.

“For many of my students, I have no idea what they look like outside of either their black screen, the little black boxes with their white names on them or the image that they’ve chosen to put in there,” Aruch said.

However, the virtual learning environment did have some perks, Aruch said. He teaches two global-type classroom courses — classes where the university has partnerships with other universities around the world. The first is with the University of Cuenca in Ecuador and the second is with partners in the Middle East and North Africa, he said.

Zoom made teaching these classes easier, he said, and added more dimension. Before, the classrooms would video-call each other as a unit, but now with Zoom, the students attend individually, making it easier to have discussions, Aruch said.

Other professors, however, still felt Zoom made teaching harder for their classes. Nicole Mogul, a senior lecturer for computer and electrical engineering, noticed that everything took longer with classes online.

She would have to record lectures, add captions, edit the captions for quality and upload them to the class site on ELMS. Even ELMS was unreliable sometimes and suffered from glitches or mistakes, she said.

And just over a year later, Mogul is ready to get back in the classroom. When the University System of Maryland announced a vaccine mandate for the fall, Mogul was elated. She wrote a letter to the chancellor, personally thanking him.

“I think that is the cause for celebration and champagne,” Mogul said.

In Villani’s experience, he never once felt unsafe in his classrooms. Students wore masks and followed social distancing guidelines. That feeling of safety is only heightened with the vaccine mandate.

And even though the university is on track to have fall classes in person, professors are still planning to be flexible if something happens that would force their classes back online.

There is a cautious optimism and practicality in their mindset, but if there was one thing they agreed on, it was their excitement and hope to be face-to-face with their students again.

“What I’m looking forward to is giving the students what they’re paying for: a real presence and instruction,” Villani said.