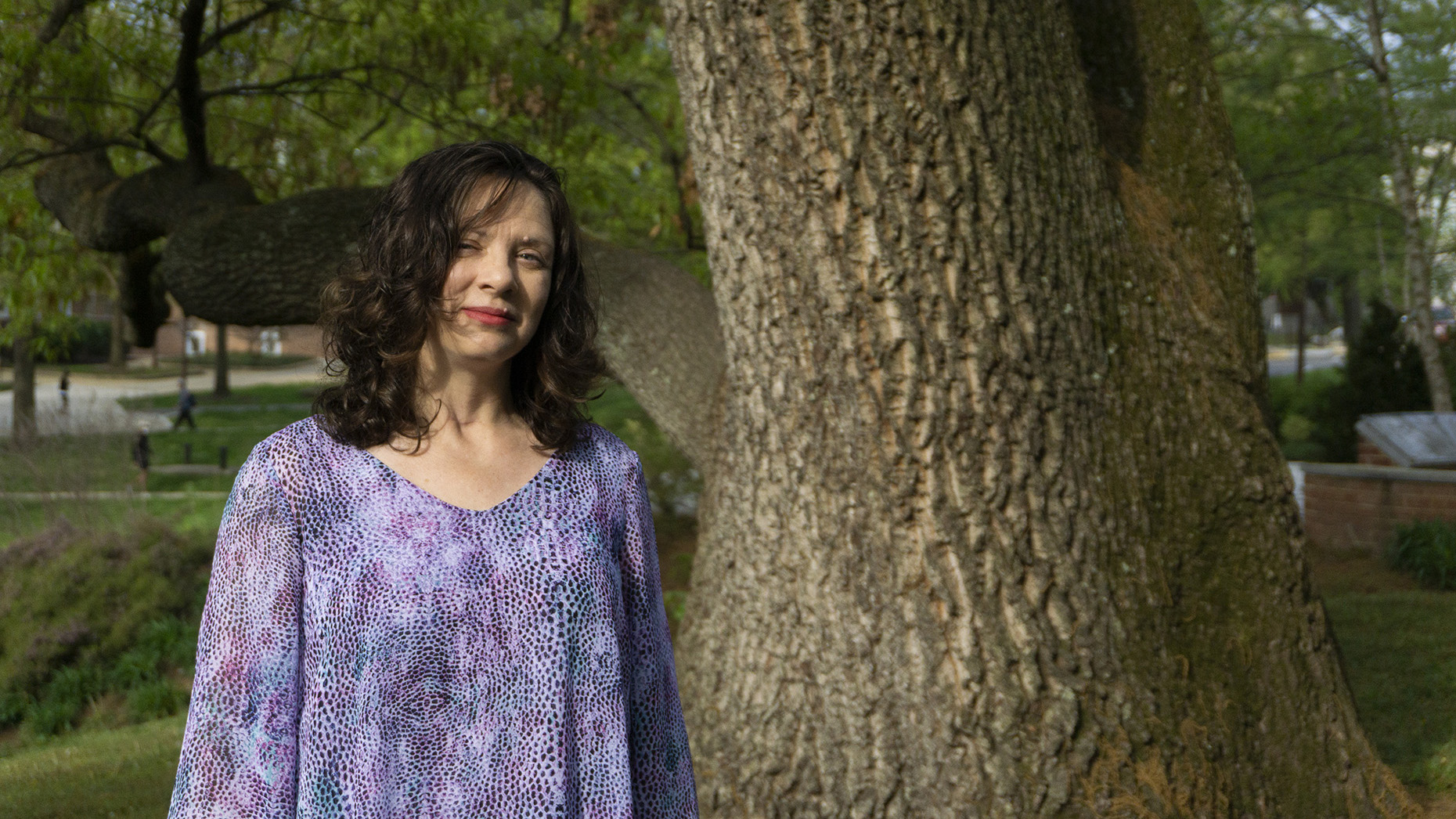 Pamela Abshire, a professor in the Department of Electrical and Computer Engineering at UMD, at the Memorial Chapel Garden on April 14, 2021. (Taneen Momeni/The Diamondback)

When Dr. Pamela Abshire was a physics undergraduate at the California Institute of Technology, she was one of few women. She was constantly met with disbelief — her classmates expected her to be studying biology because that’s what many other women studied.

She stuck with physics, and nearly 30 years later she’s now a professor of electrical and computer engineering at the University of Maryland — one of six female faculty members in the department.

“Sure, there are more things, better things, bigger things I can do. But I’m happy,” Abshire said. “I feel like I’ve gotten recognition, people treat me with respect and that’s good.”

Women in full-time academia positions continue to be underrepresented. In the United States, only 32.5 percent of all tenured professors are women. In Fall 2020, only 26 percent of professors at this university were women. Women of color, mothers and women in STEM  make up an even smaller proportion of academia.

Various factors — childcare, service requirements and imposter syndrome — have historically kept women out of tenured positions in academia. Women professors at this university have also experienced these challenges — but they have still found ways to move up in their fields.

Abshire said that, as a woman in STEM, she has grappled with imposter syndrome, which has caused her to doubt her accomplishments. In a study of female executives last year, 75 percent said they had experienced some sort of imposter syndrome in their careers.

“It seems to tend to affect more women relative to men,” she said.

[Geoscience is one of the least diverse STEM fields. Three UMD faculty hope to change that.]

There are also systemic barriers to becoming a full-time professors. To become a full-time professor, an applicant must have produced a large amount of high quality research, and the work must have a significant impact on their discipline on a national or international scale. Additionally, the applicant must be deemed an excellent educator and have a high level of service, which includes serving on university committees or scholarly organizations.

Dr. Amelia Arria, a professor in the public health school and director of the Center on Young Adult Health and Development, said women are more likely to serve on committees than men. In the end, the service requirement monopolizes their time, leaving less time for research, Arria said.

She said when it comes down to it, research is more important than service.

“I think that what happens is that women tend to sacrifice their research because they’re overwhelmed with other responsibilities,” Arria said.

In addition, various studies have shown the increased barriers that mothers face in receiving tenure. Only 27 percent of mothers in academia achieve tenure, compared to 48 percent of fathers, according to a University of Colorado study.

In terms of raising a family, an American Historical Association study found when fathers take paternity leave, it allows them to dedicate more time to their research. Conversely, women who take maternity leave are more likely to dedicate their time to taking care of their child, instead of furthering research.

Abshire became a mother before she received tenure. With two kids, it became difficult to juggle childcare as well as her research. She had to work around changing diapers and breastfeeding, as well as her children’s sleep schedules.

“I’ve talked to other women, and there’s just a limited number of times you can pull in that favor of having the entourage travel with you,” Abshire said.

Despite these challenges, Abshire pushed forward. For her, teaching and inspiring the next generation while pursuing research as a career is all she could ask for.

“Your job is to work on cool research and to inspire really bright young people, and not just to inspire them but to help move them forward into professional life,” she said.

Dr. Kimberly Griffin, who is a Black woman, is a professor and associate dean of graduate studies and faculty affairs in the education college. She explained women and men of color are more likely to pursue research that has more practical application in real-world communities. But that kind of research isn’t mainstream, she said, so questions regarding the research’s rigor are brought up. This ultimately makes it harder for people to achieve a promotion, illustrating the barriers women of color face in achieving tenure.

And this university isn’t immune to this either. In both instruction and research positions, women do not surpass 50 percent — and the number is even lower for women of color. Because of this, Griffin was hyper attentive going into promotion as a Black woman.

“I wanted every I dotted, every T crossed. I wanted to make sure that there was no room for that subjectivity that sometimes comes into process,” she said.

The university, though, has made an effort to increase faculty diversity. On Thursday, university President Darryll Pines announced a $40 million investment over the next 10 years to recruit and retain tenured and tenure-track faculty from underrepresented groups.

Professors who are women are imperative for numerous reasons, said Ruth Zambrana, distinguished professor in the women, gender and sexuality studies department. It puts women in a position to be heard on a national level and they can serve as role models, not only for women but for men as well, Zambrana said.

“Sexism is part of the myths that women are not capable. By being in these positions of power, of teaching,” Zambrana said. “They role model equality in terms of their intelligence and the positions that they take.”