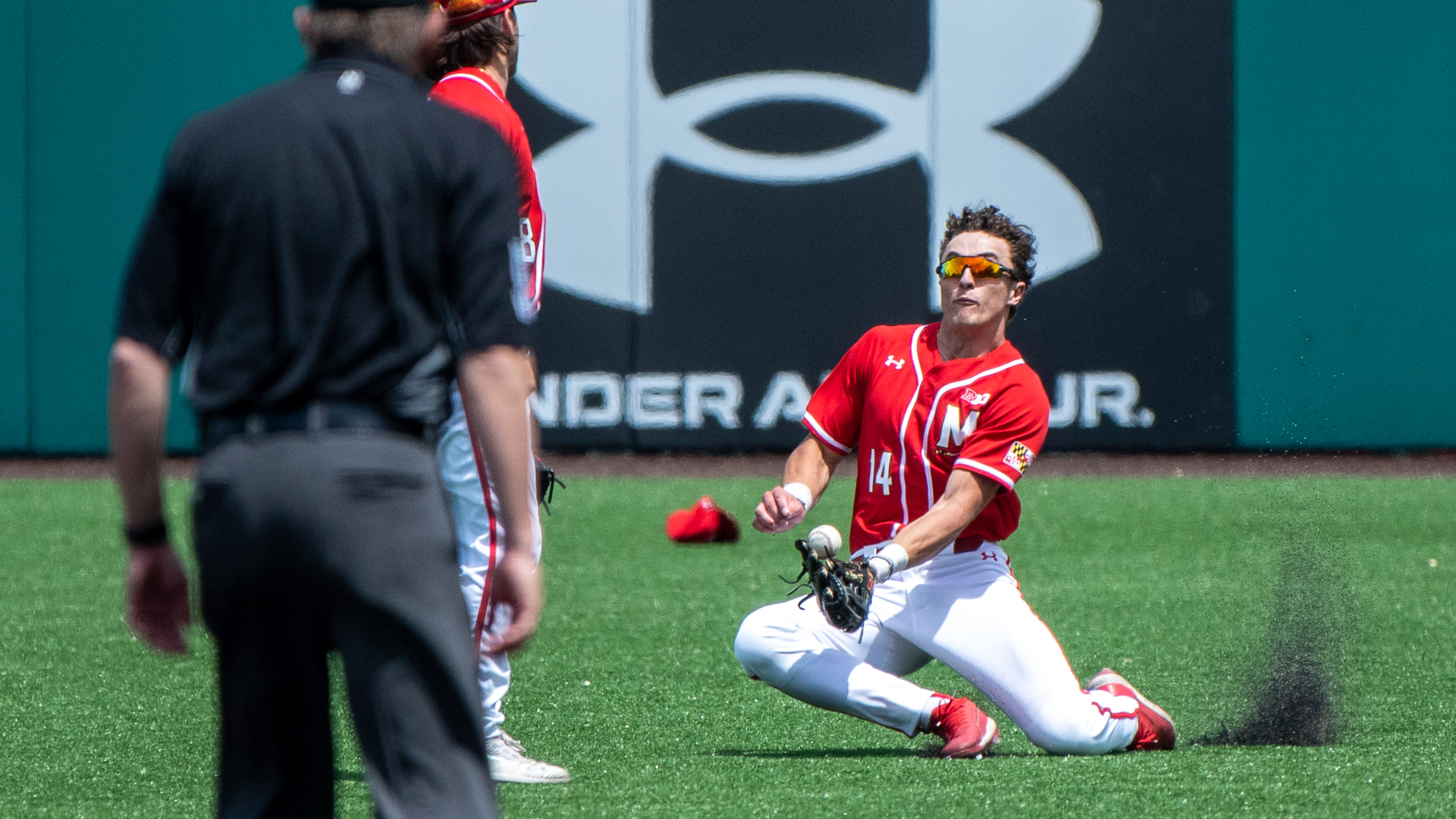 Troy Schreffler slides to make a catch during Maryland baseball's 6-3 win over Minnesota on May 2, 2021. (Joe Ryan/The Diamondback)

A worn down arm, a tight hamstring and an ailing ankle.

These were some of the ailments Maryland baseball had to endure during its series against Minnesota. But at every turn, the Terps made up the deficit in their lineup.

Starting with Friday’s opening game, Chris Alleyne was relegated to the designated hitter position after coach Rob Vaughn said his hamstring wasn’t in top shape. To fill the void, Troy Schreffler moved to center field and was penciled into the batting lineup for the first time in over two weeks.

Schreffler responded with his best performance of the season. His three hits, two walks, two stolen bases and one RBI capped off a stellar, consistent outing from the sophomore.

“We had every intention of Schreffler being our starting center fielder,” coach Rob Vaughn said. “That’s … how highly we think of him.”

He was not the sole reason the Terps won, but Schreffler forced himself into the lineup. He started the rest of the series, culminating in a six putout game on Sunday highlighted by a leaping catch at the wall to preserve a lead.

Troy Schreffler with an at-the-wall catch to rob a double.

Randy Bednar’s injury against Ohio State two weeks ago helped set up a new lineup combination. Vaughn has moved Matt Shaw to left field and Tommy Gardiner to third base, allowing room for freshman Kevin Keister to slot in at second.

The shift has helped Shaw cut down on his errors and keep him in the batting lineup, simultaneously placing a more reliable fielding presence at third. Gardiner has the second-fewest errors of Maryland’s regular infielders.

While Bednar is clearly missed in the lineup, this iteration of Maryland’s batting order has been far more efficient. And, it allows Keister to take the field.

“[Shaw] moves out to left unselfishly and is great out there,” Vaughn said. “Kevin Keister can really play defense … Keister’s going to be our shortstop in the future.”

Keister’s hitting struggles contributed to his absence from the lineup. The freshman has only a handful of hits this season, but had his best performance at the plate in his two games against the Golden Gophers. He managed three walks, two RBIs and one hit while never striking out on the weekend.

All these lineup changes gave the Terps a chance when they were missing starters. They revealed more than just the Terps’ lineup flexibility — they revealed the strength of the team’s underclassmen.

“It’s definitely looking to the future for next year … we’re looking at a really good squad,” Schreffler said.