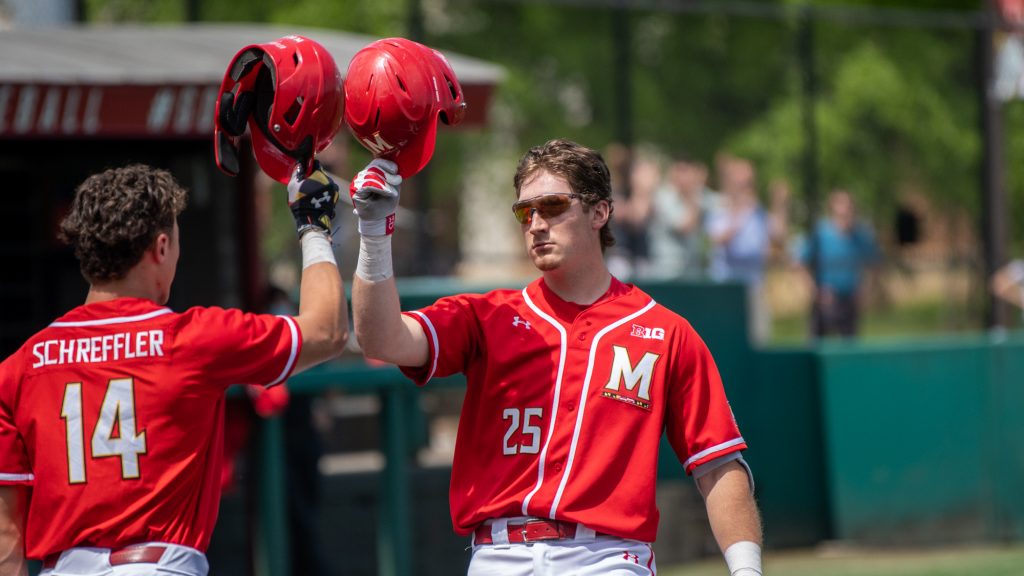 Scrambling for the wall, Troy Schreffler leaped and robbed a likely double from Minnesota’s Ronald Sweeny. Max Costes could do nothing but look back and tip his cap to the underclassmen Schreffller in the outfield, applauding the sophomore’s play.

Behind a strong performance by the Terps underclassmen, they beat Minnesota, 6-3, and swept the series. Maryland has won nine out of its last ten games.

Maryland baseball faced a rare chance to sweep a Big Ten squad in their series finale against the Golden Gophers. The Terps had been dealing with new lineups due to assorted injuries and coach’s decisions, making a sweep all the more impressive.

Maryland had no issues making contact early, but left two runners stranded in the first. The missed scoring opportunity was avenged by a booming Justin Vought homer that tacked on a pair of runs for the Terps.

The following inning saw coach Rob Vaughn’s squad put two more runs on the board via a two-RBI single banged in by Tommy Gardiner. The Terps were setting up for another dominant performance with an early 4-0 lead.

A pitching change quickly changed the lopsided score. With two extra days of rest, Sean Burke looked to be in top form on the mound. But the leading pitcher only went three innings on 52 pitches allowing zero runs off three hits.

“We wanted to use this week as a deload week for him,” Vaughn said. “He wanted to stay in the game … we’re just trying to do the right thing by Sean, make sure we take care of him.”

Two-way pitcher Logan Ott came in early relief of Burke and delivered early, keeping runners out of scoring position. An explosive fifth for the Gophers would change his steady performance quickly.

Hanging a pair of strikes down the middle of the plate, Ott allowed homers to left and right field to cut Maryland’s lead to one. The freshman had hit his first significant collegiate pitching roadblock and David Falco had to finish the inning.

In the fifth frame, Matt Orlando, who had only played in one game the past month, led the charge against the surging Gophers. Smacking his first double of the season, Orlando drove Ben Cowles home for the Terps last run until the eighth inning.

“Tough in a game like that, especially on a Sunday … to get energy in the dugout,” Matt Shaw said. “Towards the end of the game we started to realize we needed those extras runs .. and that’s what we needed.”

Rotating through a few relievers, Vaughn pieced together an admirable defensive performance in the second half of the game. Ryan Ramsey and Connor Staine each pitched an inning. With their offense sputtering in the middle innings, the assorted pitchers’ collective performance was key.

“We knew the guys in a semi-order that we wanted to go with … we had a lot of bullets in the chamber, a lot of guys really, really fresh,” Vaughn said.

An insurance run in the eighth was supplied by a pulled single by Costes. With the bases jammed, Costes drove a hit through the left-field gap and Chris Alleyne scored on the play.

Sam Bello took the mound in the ninth and put the Golden Gophers down in order to secure the win and the series sweep for his squad.

“Our focus right now is Friday at Illinois,” Bello said. “It’s scary that we’re not even playing our best baseball right now and I’m excited to see what this team is going to do.”