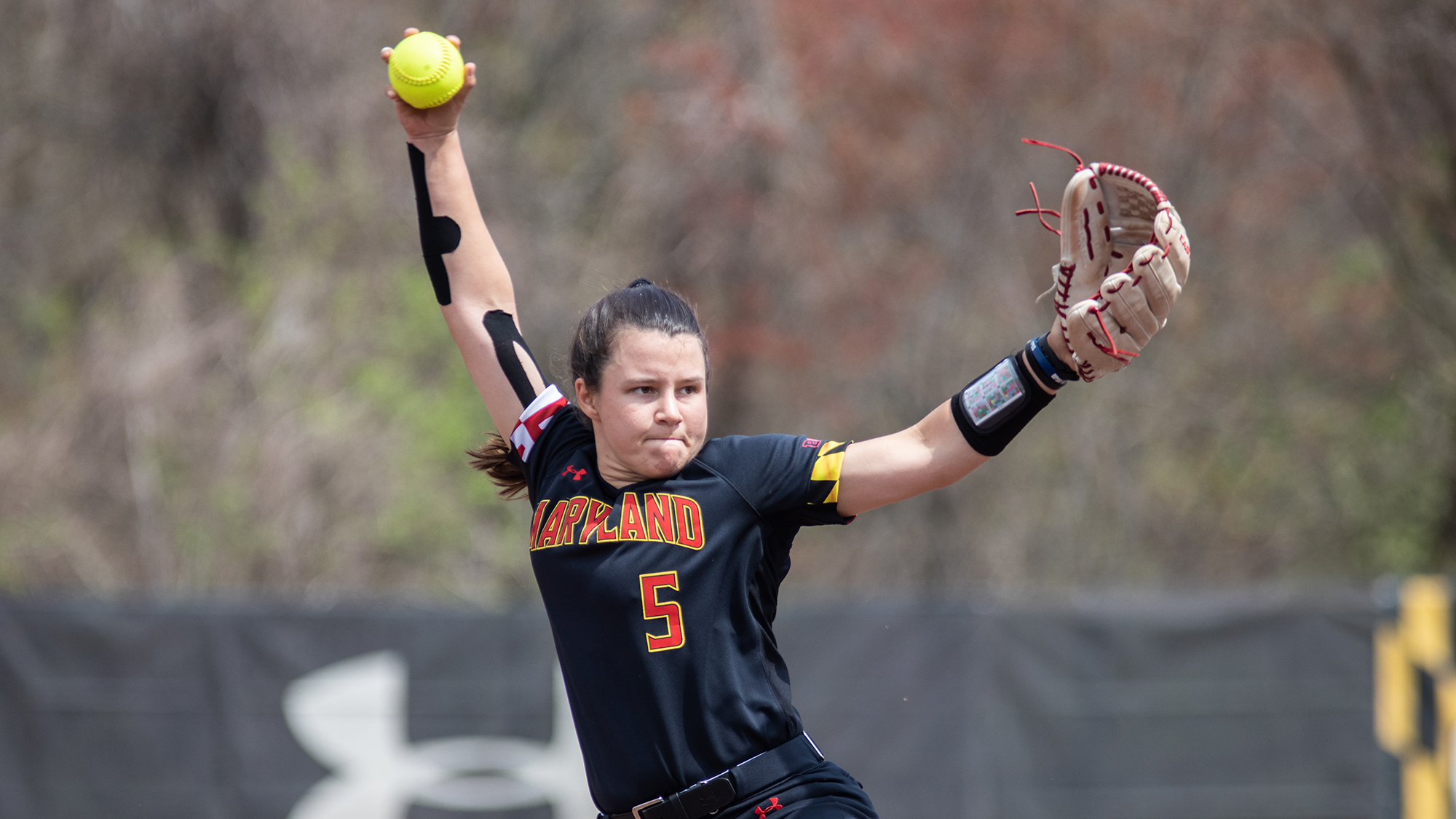 Jennifer Brann winds up for a pitch during Maryland softball's 6-1 win over Michigan State on April 10, 2021. (Julia Nikhinson/The Diamondback)

Maryland softball was ahead of Nebraska for four innings in the second game of a doubleheader. It was 3-0, and the Terps were coasting through the contest.

But in the fifth, the Cornhuskers made a dent in the Terps’ lead. With Caitlynn Neal on base, Billie Andrews crushed her second homer of the day far over the left-center field fence.

Two batters later, Cam Ybarra did the same. After Maryland intentionally walked Tristen Edwards, Ybarra laced a homer over the right field fence to give Nebraska a 4-3 lead.

Just one inning was enough for the Cornhuskers to take a comeback victory and sweep the doubleheader over the Terps. Game one was a pitcher’s duel, and game two was a more offensive fight.

Nebraska jumped on Trinity Schlotterbeck in the opening contest. With one out in the first inning, Andrews took the plate ready for what Schlotterbeck was bringing. Andrews took a swing, and the ball flew just over the center field fence for a solo shot to put the Cornhuskers in front.

[Maryland softball hopes to clean up inconsistencies at Nebraska]

Maryland tied the game in the third. With Regan Kerr and JoJo McRae in scoring position, Jaeda McFarland took the plate. She crushed a high fly ball to right field.

And when Neal did, Kerr took off running to beat the throw to the plate and knot the game at 1-1.

Nebraska clawed back to another lead in the fourth. Schlotterbeck walked Edwards — one of the Big Ten’s strongest hitters — and she stole second.

Anni Raley then lined a single to left field. The ball hit off the third base umpire and into shallow left field. A scrambling Ruby Butler hurled the ball to catcher Gracie Voulgaris to catch Edwards at home, but she beat the throw.

Edwards’ run gave the Cornhuskers the lead and the game’s ultimate 2-1 margin.

The Terps made an immediate impact in the second contest. With McFarland on first in the opening frame, Taylor Okada smoked a double down the left field line. Schlotterbeck then dropped a single into shallow left field and McFarland scored to put Maryland on the board.

In the third inning, Campbell Kline stepped into the batter’s box with two outs. Okada and Merissa Borkowski were in scoring position, ready to run.

Kline swung and drove the ball through the gap into left field. Okada and Borkowski took off running. Abbie Squier fielded the ball and fired it to where she expected Sarah Yocom to be at first base.

But Yocom was covering for the overthrow at the plate. The ball flew into foul territory, and both Okada and Borkowski scored to extend the Terps’ lead to 3-0.

Jennifer Brann cruised through Nebraska’s lineup in the first four innings, only allowing two hits. But it fell apart in the fifth inning.

Andrews and Ybarra each clubbed two-run homers with two outs, flipping the contest to a 4-3 Cornhuskers lead in an instant.

And Maryland could not recover, squandering two runners on in the sixth inning. In the seventh, the Terps went three up, three down, clinching a winless opening day of the series.