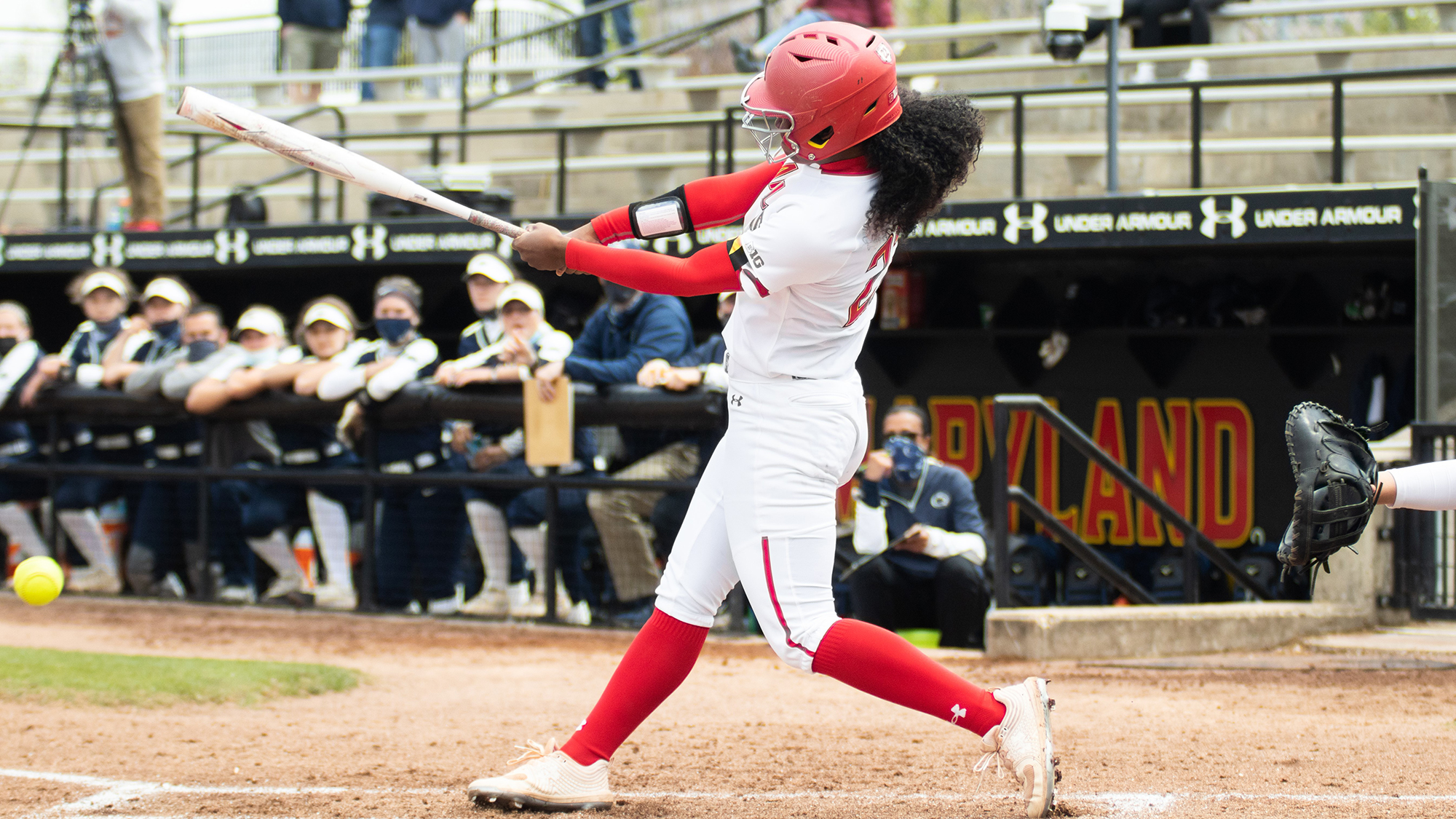 A series victory was on the line for Maryland softball. Jaeda McFarland only needed to bat in a run. But instead, she cleared the bases.

McFarland is used to swinging for the fences. The freshman is tied for first place in the Big Ten in triples hit this season. This time, she earned an inside the park three-run homer on a bunt and an error by the Penn State infield.

With the ball still in right field, she flew around the bases to secure a dramatic walk-off and a series win for her squad.

After six and a half innings without a lead, McFarland walked off the final game of the Terps’ weekend against rival Penn State and took the series 3-1.

“It’s not who you’re playing but kind of when you’re playing them, and that always matters,” coach Mark Montgomery said. “They probably would have been a team I’d have preferred to have played a little earlier in the season… but hats off to them, they fought and battled.”

Although the Nittany Lions are ranked second to last in the conference, their record is deceptive. Ten of the team’s 22 losses have been by one or two runs. And their star pitcher Bailey Parshall is tied for the sixth-most strikeouts thrown in Penn State history in just her junior year — she threw 129 in the shortened 2020 season alone.

Montgomery relied on multiple pinch hitters to take the win on Sunday. Maryland only scored two runs in the front six innings and Montgomery trusted his bench to finish the job.

“I don’t think the starters were getting the job done like they were capable of and so we went to some pinch hitters,” Montgomery said. “Campbell Kline came in and had a real key one that allowed that play to even happen.”

Some starters performed up to expectations, though. Ruby Butler had a standout weekend at the plate and at shortstop. After hitting two triples this weekend, Butler is now tied with McFarland for most triples in the conference.

“Ruby had an outstanding weekend and we’re really happy to see her growth and development as a player, especially on defense, because she’s so dynamic and you can see that,” Montgomery said.

Infielder Taylor Okada also had a productive weekend at the plate, with six hits and two runs on the series.

While the Terps have been out of tournament contention in recent seasons and without the Big Ten tournament this season, Montgomery still has high expectations for his team. With 12 games left in the season, there’s time to rack up more wins — and possibly qualify for a regional tournament.

And Montgomery is hoping success continues in the Terps’ series against Nebraska.

“Let’s go into Nebraska and let’s be intentional with every pitch we throw with, with every swing of our bat… let’s know that we want to do this,” Montgomery said. “We can win out, we can have a above .500 record, we can make a real push to go to a regional. There’s a lot of things still within our grasp with 12 games to play.”