The Josh Fight is the latest example of meme turned reality 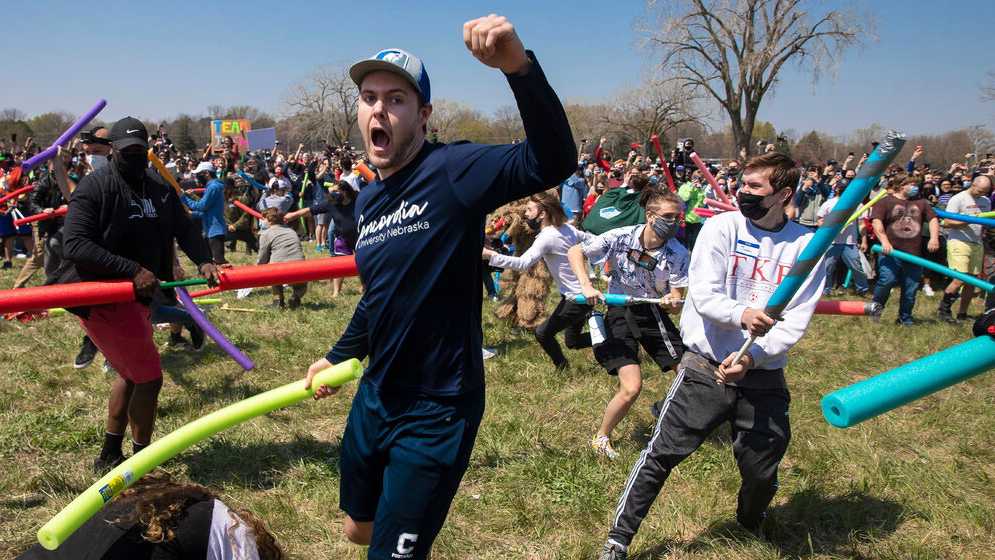 A Josh battles to be the winner of the Josh Fight. (Kenneth Ferriera/Lincoln Journal Star)

The internet is a tremendous tool for connecting and communicating. In this case, a massive group of people all with the name Josh were able to not only connect, but brawl. The group met in Lincoln, Nebraska, for a tournament to determine who would walk away with the exclusive right to the name — the Josh.

A meme circulating through the internet last year initiated the original idea. Josh Swain messaged various other Josh Swains with a directive and set of coordinates. This year, on April 24, the group was to meet at the designated location and battle, and on Saturday, the internet joke became a reality.

Although there were only two Josh Swains at the event, hundreds of others joined in on the fun. Joshes from all over engaged in a massive melee to secure the title of the one Josh. The original Josh Swain, from Arizona, encouraged contestants to bring pool noodles so the battle could ensue safely — and they delivered. They poured in, some dressed in various costumes as warriors from Star Wars, Marvel and other pop culture mainstays.

[‘Laughs are contagious’: How The Hall brought live comedy back to College Park]

Josh Swain from Arizona promoted the event on social media, listing the official rules and a location change. The original set of coordinates were arbitrarily chosen and landed on a swath of private property, the owners of which were disinclined to host an event of such magnitude in both attendance and absurdity. They even put up a small sign directing potential Josh contestants elsewhere and wishing them luck.

Swain included directions to bring nonperishables to support a food drive for the Food Bank of Lincoln. About 200 to 300 pounds of food were donated. He also organized a fundraiser for the Children’s Hospital & Medical Center Foundation in Nebraska, as he wanted to “use this attention to donate to a worthy cause in the state in which the ‘battle’ is taking place,” the donation page reads. People donated more than $14,000.

Onlookers held signs or wore T-shirts with phrases such as “Team Josh,” “I Love Josh” and “I’m With Josh” to show support for their favored participants. Someone even designated the park as a historical landmark on Google Maps with the title “Legendary Josh Battlefield.”

[Travel through the decades at this year’s Art Attack festival]

Ultimately, there was a winner of the contest: His name is Josh and he is 4 years old. Josh Vinson Jr., a Lincoln resident, was announced the winner with a Burger King crown and hoisted into the air to bask in his domination. Furthermore, the children’s hospital supported at the Josh Fight had treated Vinson Jr. before, Barstool Sports reported.

Though it may seem silly, this event brought me hope. Even when things seem to be at their darkest — like when the original meme surfaced during the intense haze of quarantine — there are still those willing to go to great lengths to instill humor and bring joy to those like Vinson.

The internet is a vastly powerful tool, and if it can organize something as ridiculous as the Josh Fight, I wonder what else could be accomplished through tasteful memes for great causes. While I was concerned at the surprising lack of Joshes with masks, a little fun during the pandemic is nice to see. When we’re forced to be apart, something can always bring us back together — even if it’s just having the same name.