‘Laughs are contagious’: How The Hall brought live comedy back to College Park 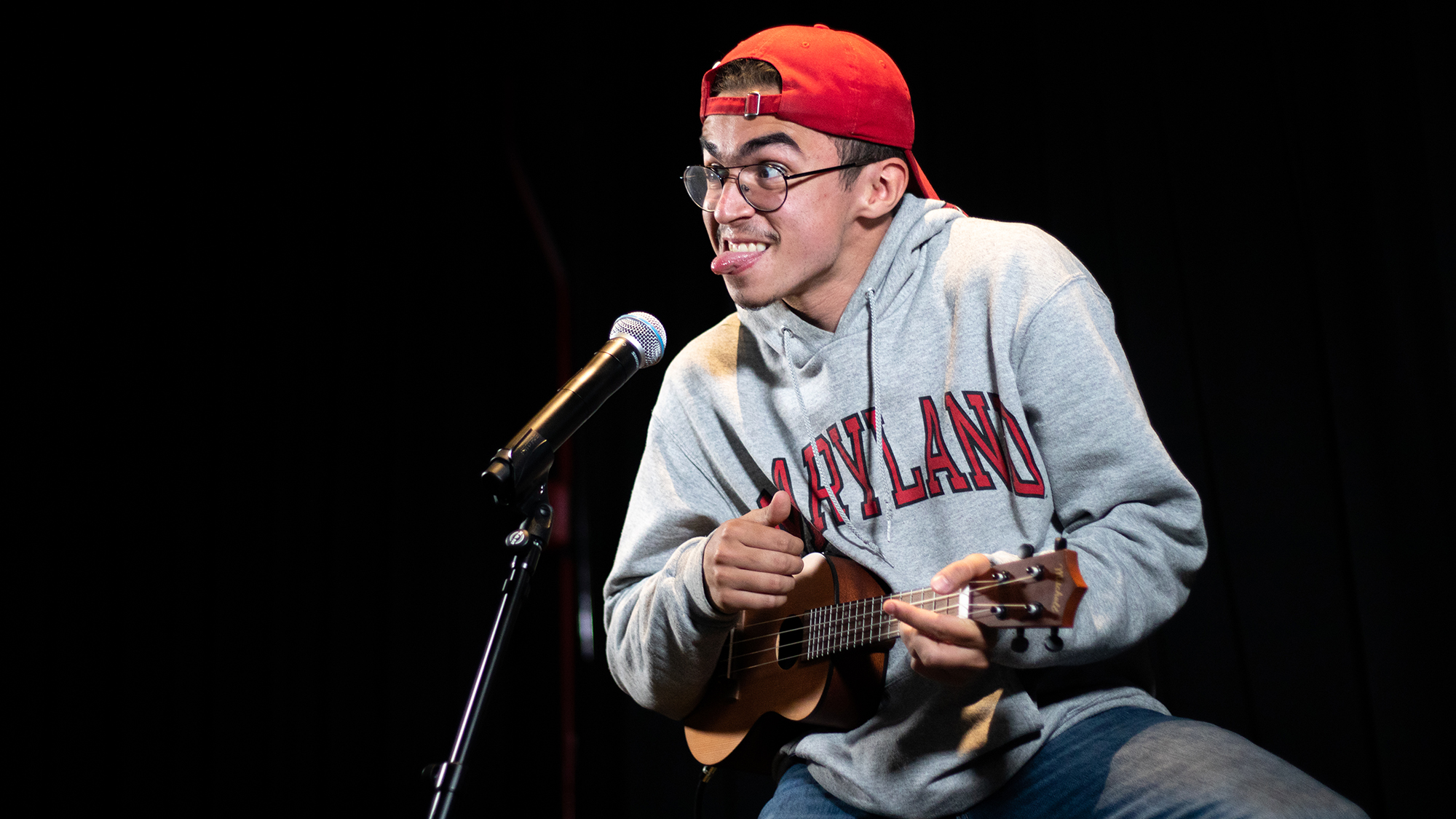 Sammy Garcia performs at the beginning of the show. (Julia Nikhinson/The Diamondback)

The Hall hosted its first-ever live comedy show Sunday. Nine comedians came together and put on a two-hour show at the local restaurant in collaboration with CryBaby DC, bringing live entertainment back to College Park for the first time in a while.

Mike Kurtz, head producer for CryBaby DC, had proposed a plan for a show at The Hall pre-pandemic, but it was pushed due to closings and safety guidelines.

“Mike actually reached out to the previous programming director about setting something up over here, and obviously then the world shut down,” said Shilo Peers, a University of Maryland alumna and the marketing and events coordinator for The Hall.

Live entertainment has suffered greatly from COVID-related shutdowns. From concerts to stand-up, the whole industry was brought to a halt. And even when restrictions were lifted and events could be held outdoors, it was hard to replicate the same energy it once possessed.

“You want people close together, because laughs are contagious, you know, but so is this deadly disease,” said John Hedrick, another alumnus of this university who helped Kurtz put together the event.

While the event had been planned beforehand, Peers and Kurtz didn’t bring the show into fruition until recently. The Hall wanted to start live events again and decided to look back on past prospects.

“It just made sense to start with a comedy show,” Peers said.

The show was one of The Hall’s first endeavors into mixing live entertainment with their dining experience.

Hedrick and Kurtz weren’t alone in their planning. Senior supply chain management major Sammy Garcia hosted the event. Garcia met Kurtz after doing stand-up at Milkboy Arthouse. As the event was coming together, Kurtz needed a student ambassador for the event and thought Garcia was the best person for the job.

Garcia has loved comedy from a young age. He recalls doing stand-up during his sixth grade talent show as one of his first experiences writing out jokes for a set, and he started taking comedy seriously during his freshman year of college.

“I did a lot of live online content, whether it’s writing sketches or doing stand up over Zoom,” he said.

Kurtz and CryBaby set their sights on The Hall, and their event sold out.

Nine comedians performed sets covering everything from dating app struggles to attending therapy. They fed off their environment, calling out members of the audience. One accused me of looking like a mass shooter, but effortlessly did it in a playful way that kept the audience laughing.

To be fair, I think I deserved the tease. I was hunched over a high-top table scribbling down details in a notebook for this very article. His judgement may have been harsh, but I presume I looked a little shady.

Sadly, the audience fell a bit short. Many people were talking over the sets or just not paying attention, creating a poor environment for jokes to land. I was lucky I sat close to the stage where I could hear the comedians, so I was laughing all night long.

The Hall and CryBaby don’t plan to stop live events. “People can look to us for the summer as like the spot in College Park,”  Peers said.

The pandemic challenged people’s ability to adapt in all aspects of life, and it challenged the ways and means to produce art as we know it. CryBaby and The Hall’s event showed that laughter stops for no one, not even The Hall’s soft pretzels.

To keep up with all things CryBaby, you can visit them on their website and on Instagram. For more information on upcoming events at The Hall, visit their website.