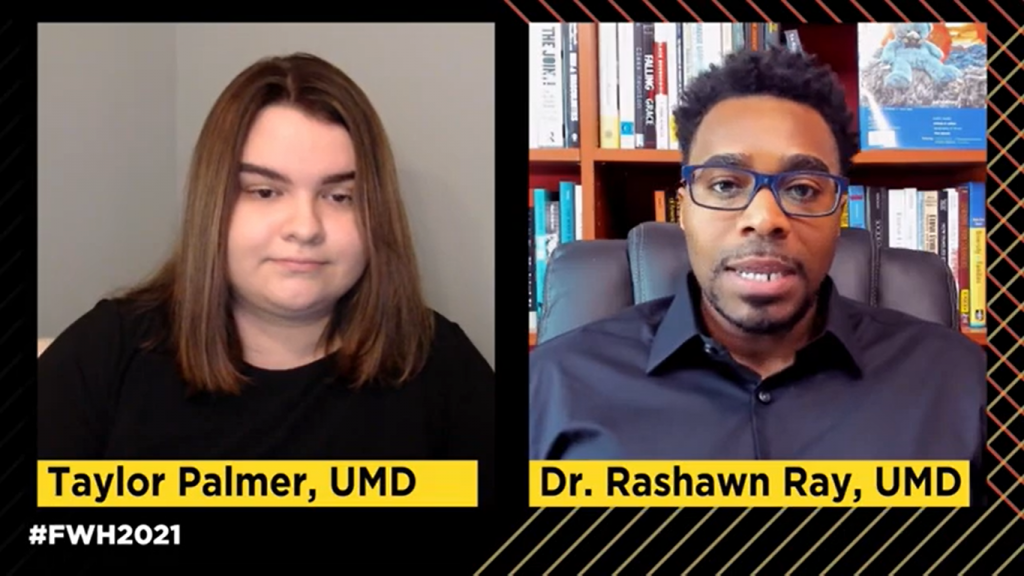 By Khushboo Rathore and Emily Williams

Experts, faculty and students from Bowie State University and the University of Maryland discussed race relations on college campuses and beyond, as well as how universities can improve their allyship and confront racism, during the annual Social Justice Alliance Spring Symposium Friday afternoon.

The alliance between Bowie State and this university was launched in October 2020 in response to the murder of 2nd Lt. Richard Collins in 2017. The partnership was designed to create initiatives and engage in conversations surrounding social justice through curricula, research and grant proposals and student organizations, among other areas.

“To my knowledge, there is no other partnership between two state universities … that has partnered around social justice issues in particular,” said Mia Smith-Bynum, an associate professor of family science at this university and co-chair of the alliance’s programming committee.

At the “Forward with Hope: Never Shall We Forget” event, University of Maryland President Darryll Pines announced a permanent memorial to honor Collins had been selected, and it will be in close proximity to the bus stop where he was murdered.

“At this moment, it’s so important that we educate our students, faculty, staff, alumni, about the history of racism and race relations in this country, so we can all thrive in a multicultural, multiracial society,” Pines said.

Taylor Palmer, a senior behavioral and community health major at this university, moderated the panel. She began by asking panelists about what can be learned from Black freedom movements, while the country grapples with contemporary white supremacist violence.

[Black student leaders are pushing for change at UMD. Here are their 31 demands.]

Rashawn Ray, a sociology professor at this university, acknowledged the Black Lives Matter movement has done so much work in such a short time period without the help of mainstream media and politicians.

“People will continue to read about the movement for Black lives,” Ray said. “They will read about how intersectional it is, how inclusive it is, and most importantly the way they strive for social change, whether that be criminal justice reform, whether that be … grappling with white supremacy more broadly.”

The conversation shifted to asking about how universities can help their Black student leaders. It starts with a prioritization of mental health and bridging a disconnect between students, the community and the administration, said Zahrah Siddiq, president of this university’s NAACP chapter.

“I have noticed that people are one, just mentally exhausted,” the junior kinesiology major said. “Especially student leaders trying to plan events, trying to speak up on certain issues, because these are important. These affect our daily lives, especially being a person of color, especially being Black.”

Kortney Wells, president of the Student Government Association at Bowie State, also stressed the importance of mental health support, particularly as social media has made more information on police shootings, for one, readily available, but at the cost of mental health.

“I’m a criminal justice major, and it’s often difficult to detach yourself from things that you are learning in class because you could see yourself as that person or the family member of that person,” Wells said. “It can mentally be draining.”

The discussion then moved to talk about how Bowie State and the University of Maryland can help to address institutional racism, citing “unhelpful” and “toxic” comparisons about the quality of education between historically Black colleges and universities and predominantly white institutions. Charles Adams, a criminologist and department chair of behavioral sciences and human services at Bowie State, said predominantly white institutions want diversity, but they force assimilation.

“That is just as damaging and part of systemic discrimination,” Adams said. “The devaluing of our culture is creating a standard.”

In an interview with The Diamondback, Adams explained universities also need to be more intentional about their language and curricula. Professors and students should be teaching and practicing social justice, respect and equity, he said.

The creation of a social justice alliance was a step in the right direction, said Tafeni English, the director for the Southern Poverty Law Center’s Civil Rights Memorial Center — but she emphasized community voices cannot be left out.

Moving forward, after Derek Chauvin was convicted in the murder of George Floyd, English called for more accountability, as well as collective organization between civil rights organizations and communities.

Still, there is work to be done, alliance member and Bowie State coordinator of Greek life and community service Steve Stephens said. Ma’Khia Bryant, a 16-year-old, was shot and killed by police the same day Derek Chauvin was convicted.

“We still have more work to do, and we’ll roll our sleeves up, and we’ll get right back to it,” he said.