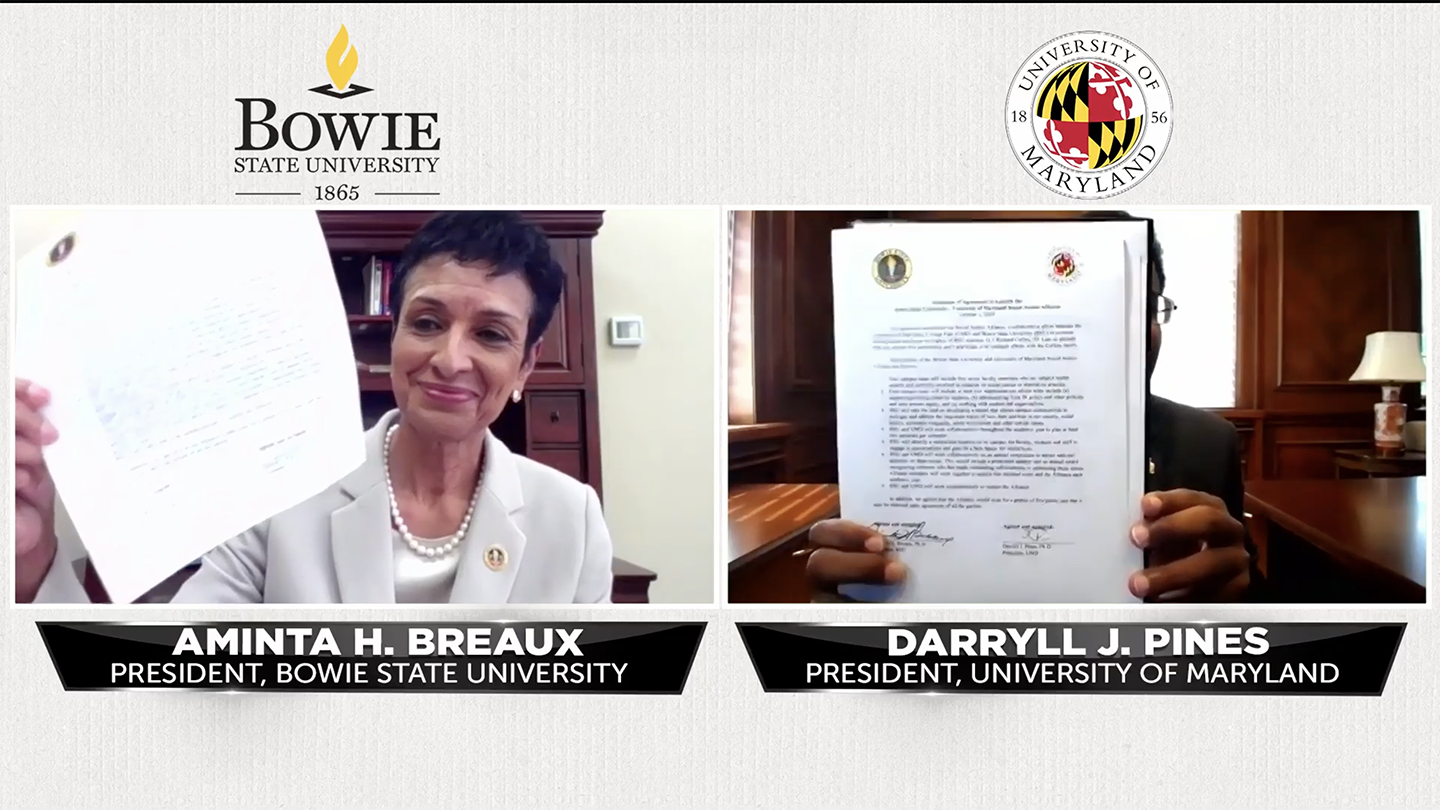 The University of Maryland and Bowie State University held a virtual launch introducing their Social Justice Alliance, which will serve to further memorialize 1st Lt. Richard Collins and promote social justice efforts across both schools.

It’s been more than two years since Lt. Richard Collins III, a Black Bowie State student, was stabbed to death by a white University of Maryland student. In the wake of Collins’ death, there’ve been moments of joy and sorrow throughout both campuses — from heartfelt candlelight vigils, to the lengthy murder trial, to the many events intended to promote education and awareness in the wake of tragedy.

The initiative between the universities — which will include various symposiums and a national conference — is intended to stimulate conversation about social justice to foster civic engagement across both colleges, said Kimeta Hairston, a Bowie State professor who will lead the alliance.

“It is my honor to carry the torch on behalf of Bowie State University campus community, ensuring the legacy of Lt. Collins continues on at BSU for generations of learners,” said Aminta H. Breaux, Bowie State’s president. “It is my commitment to his family, the university and this country that his death will not be in vain.”

Georgina Dodge, this university’s diversity and inclusion vice president, will work alongside Hairston. She said they also hope to have virtual events with the larger campus community and establish an annual award for social justice leaders.

The initiative comes alongside the 2nd Lt. Richard Collins III Law, which went into effect Thursday. The law expands the definition of a hate crime; the previous language of the hate crime statute played a role in the dropping of the hate crime charge against Collins’ killer, Sean Urbanski.

“Like so many other Black men, I saw myself in Richard, but more importantly, I also saw my son in Richard, who’s about the same age … many among us saw ourselves in him,” university President Darryll Pines said. “The social justice work that we’re about to align along will be important and timely.”

[Some Black UMD students appreciate Pines’ actions, but others say he lacks urgency]

Along with the existing initiatives, such as the 2nd Lt. Richard Collins III Foundation and the 1st Lt. Richard W. Collins Social Justice Endowed Scholarship, Breaux added that they are also establishing a social justice center at Bowie State, which can be used by both universities for research.

They’re also creating a centralized safe space on Bowie State’s campus for the alliance members, according to a press release about the event.

At this university, Pines said, there will be a new scholarship called the Lt. Richard W. Collins III Scholarship.

There will also be a memorial to honor Collins. The location and details on the memorial will be released in the next month or so, Pines said. Right now, a memorial with a picture of Collins is located at the bus stop next to Montgomery Hall, where he was killed.

Zahrah Siddiq, president of this university’s NAACP chapter, said she hopes the alliance will bridge the communication gap between the two universities.

“Y’all are so close to us, and I feel like we’re very connected but also not at the same time,” Siddiq said. “This alliance will help bring our communities together.”

Pines said they’ve been intentional about fostering this university’s involvement with the alliance. He added that he’s been working with Black student groups, especially in the wake of George Floyd’s death.

“I think you will see a number of improvements in the next year [that] will help improve campus climate and culture for every citizen on our campus,” Pines said.

“It is our vision … that this event today will be the beginning of an effort that will be replicated throughout the nation,” Richard Collins II said.

Breaux agreed. With all the racial tension and COVID-19’s effect on communities of color, national change is necessary.

“We are here today to say change must happen, and it starts with us,” Breaux said. “This alliance ensures that hate does not win out.”