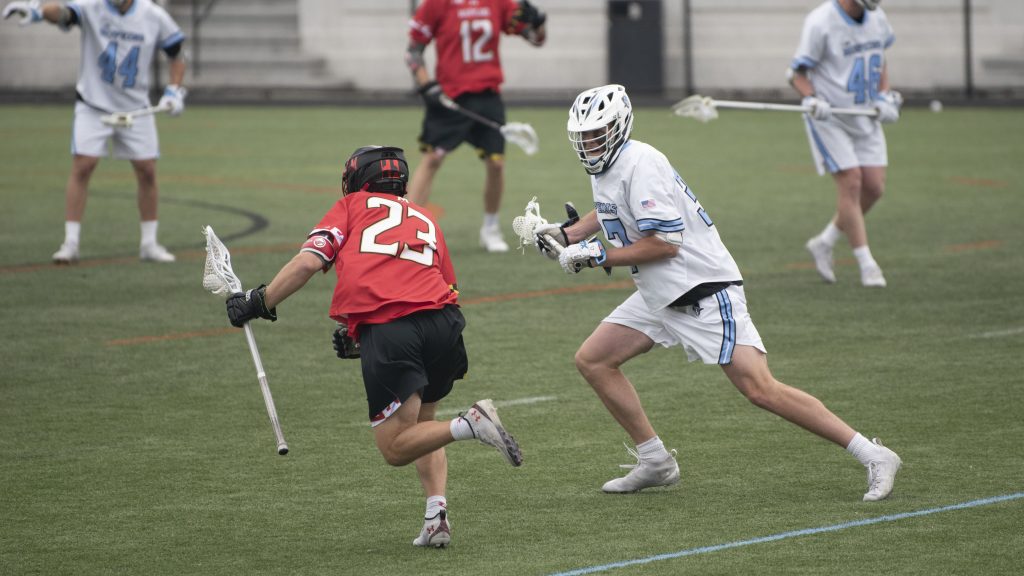 BALTIMORE — Kyle Long stood waiting for the referee’s whistle to resume play. Just seven seconds remained on the shot clock, and the ball ended up in Logan Wisnauskas’ stick. As time expired, Wisnauskas dove past the cage and scored to make it a 13-12 game with 1:48 remaining.

Still, Maryland trailed by a goal, but they won the next faceoff, and Jared Bernhardt scored 12 seconds later. The Terps retained possession for the next 96 seconds, and it was Wisnauskas once again who gave his team the lead before time expired.

The three goals in the final two minutes propelled Maryland men’s lacrosse to a 14-13 win over rival Johns Hopkins and a perfect 10-0 regular season.

“The way that the guys responded when we were down and things weren’t going well, I couldn’t be more proud of our guys,” coach John Tillman said. “There’s certainly a lot that we can work on and a lot that we can take away from this.”

The first two goals of the game came from Bernhardt, the Terps’ all-time leading scorer and a Tewaaraton Award nominee.

Bernhardt showed off his offensive versatility early on, scoring his first goal from a few yards out then charging the net and scoring along the crease for his second.

“I felt like I had a good opportunity there, and I was able to finish,” Bernhardt said.

Maryland’s offense kept moving along from there. Colgate transfer Griffin Brown was the next Terp on the scoreboard with his sixth goal of the year, then Wisnauskas sent a laser past Johns Hopkins goalie Tim Marcille.

Bubba Fairman added one as well, and the Terps held a 5-0 less than 11 minutes into the game. But that wouldn’t last. The Blue Jays scored four out of the next five goals to make it a 6-4 game.

Hopkins’ fourth goal stemmed directly from a Tyler Dunn faceoff win, as Dunn took it all the way to the cage himself after gaining possession over Maryland faceoff specialist Luke Wierman.

The Terps answered with three-straight goals of their own to give themselves some breathing room.

Anthony DeMaio gave Maryland a 9-4 lead off a remarkable pass from Wisnauskas. Wisnauskas fell to his knees facing away from the cage, flipped a pass behind his back, and DeMaio cashed in.

After the DeMaio goal, the Blue Jays started to crawl back. First it was Garrett Degnon scoring with 39 seconds left in the first half. Then Jacob Angelus notched his first goal of the game with just two seconds on the clock in the second period.

Maryland took a 9-6 lead into the break, but that wouldn’t hold either. Hopkins scored the first three goals in the second half, and tied the affair at nine goals each.

“We needed to prove that if we got punched in the face and the kids were down, we were mentally tough enough to potentially come back and do this,” Tillman said. “No one wants to be in that spot… but with Johns Hopkins, there’s a lot of talent there.”

Each time Maryland scored in the third period, the Blue Jays clawed back to tie it. With five seconds left in the period, DeMaio found Maltz, and he netted the final goal of the period to take the Terps into the fourth with a 11-10 lead.

The Blue Jays continued to outplay Maryland early in the fourth quarter, taking advantage of two Terps’ penalties to tie the game and pad their lead.

Jonathan Peshko’s man-up goal with 5:04 left in the game was the last time Hopkins scored in the game, as Maryland’s triumphant run began a few minutes later.

The three-goal stretch at the very end helped the Terps to their tightest win of the year and allowed them to carry momentum into the Big Ten tournament in two weeks.

“It’s going to be weird having this time off,” Wisnauskas said. “We can take advantage of it.”