Miles from Ethiopia, UMD community members worry for their families amid Tigray crisis 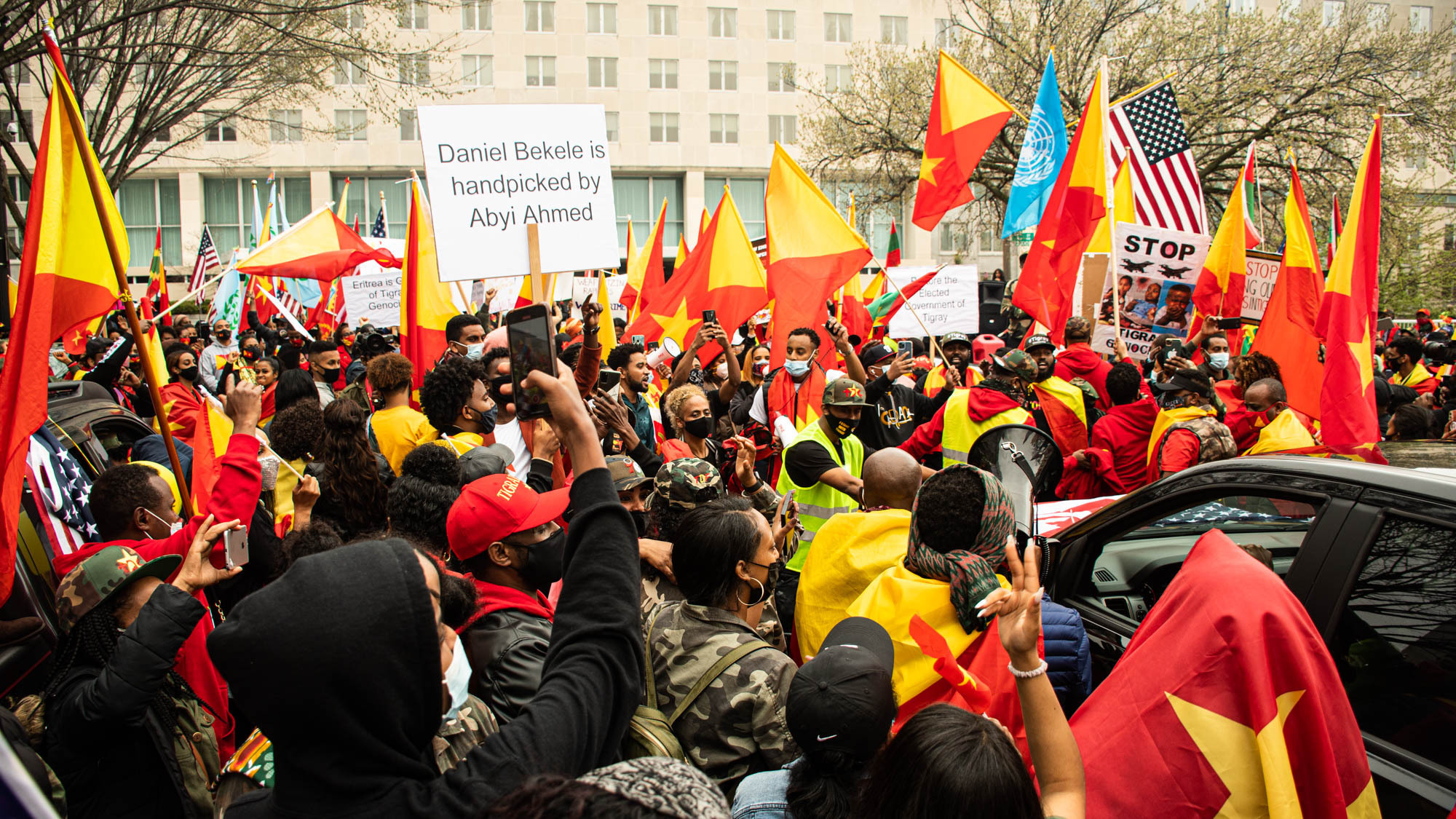 People protest the conflict in the Tigray region of Ethiopia outside the U.S. Department of State in Washington D.C. on March 25, 2021. (Freddy Wolfe/The Diamondback)

CLARIFICATION: This story has been updated to reflect the fact that Marta identifies as Tigrayan, not Ethiopian.

Haben said she remembers the three visits she’s taken to her family’s native community in the Tigray region of Ethiopia. She reflects on a place full of culture and hospitable citizens that are as strong-willed and self-determined as they come.

“It doesn’t matter where you’re from, who you are, anywhere you go,” said Haben, a former University of Maryland student who agreed to be identified by a pseudonym. “Even if they’re not related to me, when I go there, everybody welcomes me with open arms.”

But just five years after her last visit, the small Ethiopian region isn’t the place it used to be.

For the last several months, Tigray has been torn apart by a conflict between old and new parties. And while Haben said her parents fled Tigray during the last regional war, she said many of her family members remain, living in constant danger alongside about 7 million other citizens.

In November, Ethiopia’s government declared a state of emergency in response to an alleged attack by the Tigray People’s Liberation Front, according to reports from CNN. The decree gave the government power to “protect the country’s peace and sovereignty, and to maintain public security, law and order,” which included the severing of democratic rights, CNN reported.

Shortly after, the government cut Tigray off from the rest of the world, shutting off internet access and cell phone towers and causing a region-wide blackout. The region remains volatile today.

[Under the travel ban, some UMD students from Iran haven’t seen their families in years]

According to the Council of Foreign Relations, journalists and humanitarian organizations don’t have access to many areas, but there are reports of sexual violence, massacres of innocent civilians, ethnic cleansing and widespread looting.

As of the end of March, Ethiopia’s Bureau of Labor and Social Affairs estimated that 1.7 million people in Tigray have been displaced from their homes, according to the U.N. The U.N. also estimates that at least 4.5 million people in Tigray are in need of humanitarian aid. As a result, the U.N. and the Ethiopian Human Rights Commission announced in March that they will be carrying out a joint investigation into abuses in Tigray.

“This is not about where you’re from, who you are, politics — this is a humanitarian cause,” Haben said. “It’s not just soldiers dying, it’s regular civilians.”

There are 17 international students from Ethiopia enrolled at this university as of fall 2020, and Haben isn’t the only person in the community who is worried about loved ones in Tigray.

Senior information systems major Akeza said she has family in Tigray but keeps in contact with her grandmother, who lives in the region’s capital city, Mekelle, the most.

“It feels like you’re being suffocated with all of these situations that you wish you could prevent and you know you can’t. It’s here now so all we can really do and all I really want to do is just keep advocating for peace,” said Akeza, who also agreed to be identified by a pseudonym.

While she said she tries to call as much as possible, she said her family fears talking in detail on the phone in case they’re being tapped — and she said they’re especially scared because there’s heavy military presence in the area.

“The issue is, with our family in the rural areas, we haven’t been able to contact them,” she said. “The reason why we’re able to know they’re in the jungle right now is because of reports in the news.”

Haben said her family has seen the impact of the looting firsthand. Her aunt died after being unable to get her blood pressure medication, she said, because many of the area’s health facilities are ransacked and destroyed.

Because of how dangerous the region is, Haben said, most of her family couldn’t attend her aunt’s burial.

“Burials are a big part of our culture and so, normally if a family dies, they would fly, and go there to make their service,” she said.

Marta, a staff member at this university who agreed to be identified only by her first name, said she has family in Mekelle and Tembien. She said she also remembers the once-lively region.

“A part of my heart definitely breaks. I miss it. I wish I’d see it again sooner. Right now all of my thoughts and prayers are for what future Tigray could be post-war,” she said. “My hopes are that we can finally get to the rebuild phase soon, because it was a city that was growing progressively over time.”

Kidus Yared, a sophomore computer science major, has cousins and uncles from Gurage who currently reside in the Ethiopian capital of Addis Ababa. He said his family remains largely unaffected by the conflict and is upset about how international news outlets have been reporting on it.

He said his family says there are atrocities happening on both sides of the conflict. The Ethiopian government has been accused of attacking civilians, and the TPLF raised the prospect of brutal guerilla war, according to The New York Times. He added that the TPLF has a lot of global influence and relationships with other countries.

“There is much more behind this issue than what we see. The international community feels like this needs to be an issue that’s the result of these reasons,” he said. “But they need to understand that what’s happening is the result of 27 years of a corrupt government.”

Marta and others in the Tigray community have been organizing protests, signing petitions, using hashtags on Twitter and making phone calls to state and federal representatives with the goal of an “immediate cessation of hostilities.”

“So many members of the diaspora just woke up one day and were forced to become activists,” Marta said. “It was a way of seeing our Tigray community come together and organize so quickly. It really does feel like an uphill battle and there’s so much more to do.”

Marta said she feels more connected to her people through activism.

“I didn’t grow up with a huge Tigray community,” she said. “And now I feel like I have all these extra cousins.”

Regional wars have raged in Ethiopia for years, but especially after the Rwandan genocide in 1994. Marta and Haben said they want to see an end to the killing of innocent civilians.

“When we say, ‘never again’ to heinous war crimes, human rights atrocities, genocides, we actually have to mean it,” Marta said.