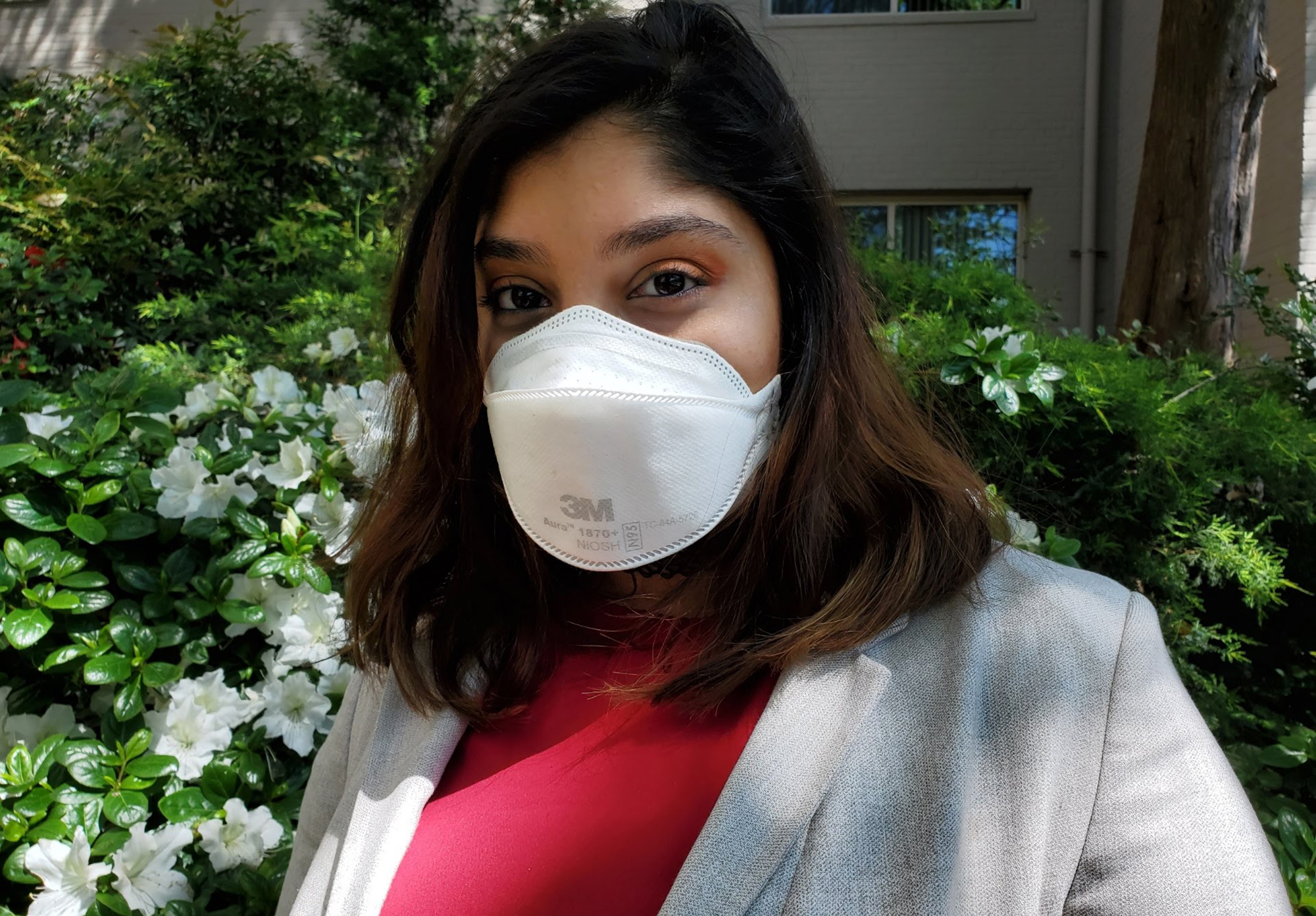 Athiyah Azeem, a senior journalism major at the University of Maryland and a native of Singapore, on May 7, 2020. (Photo courtesy of Athiyah Azeem)

When the University of Maryland announced March 19 that all classes would be moving online for the rest of the semester, he scrambled to pack up his belongings on campus and catch the last flight to India before the country shut down air travel indefinitely.

But he was too late. Seven weeks later, he remains in Maryland, staying with extended family in Rockville.

And though Bansal is riding out the pandemic 8,000 miles from home, he could become one of the lucky ones if the university reopens in the fall.

All over the country, the suspension of in-person classes and prolonged travel restrictions due to the coronavirus has left international students uncertain of their future at American universities. Added to this uncertainty is the possibility of new visa and immigration rules that could deter them from staying in the United States after graduation, as the government scrambles to keep Americans employed.

Though Bansal missed his flight, other international students were able to make it back to their home countries just before the borders closed.

For Vibhor Goel, who flew back to India on March 17, that decision came with its own costs. His online classes begin around 2 p.m. in the United States, meaning they start at 11 p.m. in India. Every day, the sophomore stays up until around 2:30 a.m. so he doesn’t miss any of his computer science lectures.

It’s been an adjustment for Goel, but even these circumstances are controllable.

What really worries him, Goel said, is not knowing whether he will be able to return to the U.S. should the university reopen in the fall — a situation he fears might harm his ability to stay enrolled at the university.

“If the university holds online classes for the next semester, then my visa status is not in jeopardy,” he said. “But if they open for nationals and not for internationals, then it will be a huge problem.”

However, for students like Goel who are staying outside the country and who, depending on travel restrictions, may not be able to return to the U.S. even if in-person classes resume in the fall, the ability to hold onto their visa is less clear.

In response to a growing list of visa questions, the Office of International Student and Scholar Services has expanded its online chat services for students and has doubled staffing, according to a statement from the Office of International Affairs. It has also hosted virtual town hall meetings to address coronavirus-related issues and will continue to do so this summer, according to the statement.

New restrictions on immigration and visa processing have also heightened concerns for some international students on their ability to work in the U.S. in the future.

When Athiyah Azeem found out that all routine visa services would be suspended as of late March due to the coronavirus, she panicked. The senior journalism major had just sent in an application for Optional Practical Training, which allows students with an F-1 visa status — a common type of status for international students studying in the U.S. — to work in this country temporarily after graduating.

Without work authorization, Azeem would have to return to her native Singapore 60 days after graduation. She has not been home in four years.

“I’m like, ‘Does that affect me? Is my future over?’” Azeem recalled wondering when she first read the news.

An adviser at the university’s international student services office assured her soon afterward that the suspension in visa processing would not interfere with her plans.

Yet, there’s a growing sense among Azeem and other international students that stricter immigration policies created under President Trump’s administration will be exacerbated by the coronavirus — which, as of Thursday, has already caused 33.5 million Americans to lose their jobs.

Students who have faced the effect of these policies in their efforts to get internships and find work in the U.S. fear the government will enforce harsher policies on non-citizens to ensure more American citizens can get back to work in the future.

“The system has put so many restrictions on how international students can apply for work,” Azeem said. “It’s meant to deter non-citizens from getting into the job market. You’re fighting against that, and it’s a force that’s very hard to fight back.”

Goel has already had his summer internship offers with two different companies revoked. He feels that if he had been more local, the companies may have allowed him to stay on and work remotely, he said.

Due to the uncertainties caused by the coronavirus, the American Council on Higher Education predicts a 25 percent drop in international student enrollment at U.S. universities over the next year. Their absence would be felt — both financially and physically — at this university, which hosted more than 6,000 international students in 2018.

These students are valuable assets to universities, Azeem said, and she worries about how fewer international students on campus will affect the environment.

“Communities are built from migration, and this is a global world,” Azeem said. “You need representation from all parts of the world in your policies.”