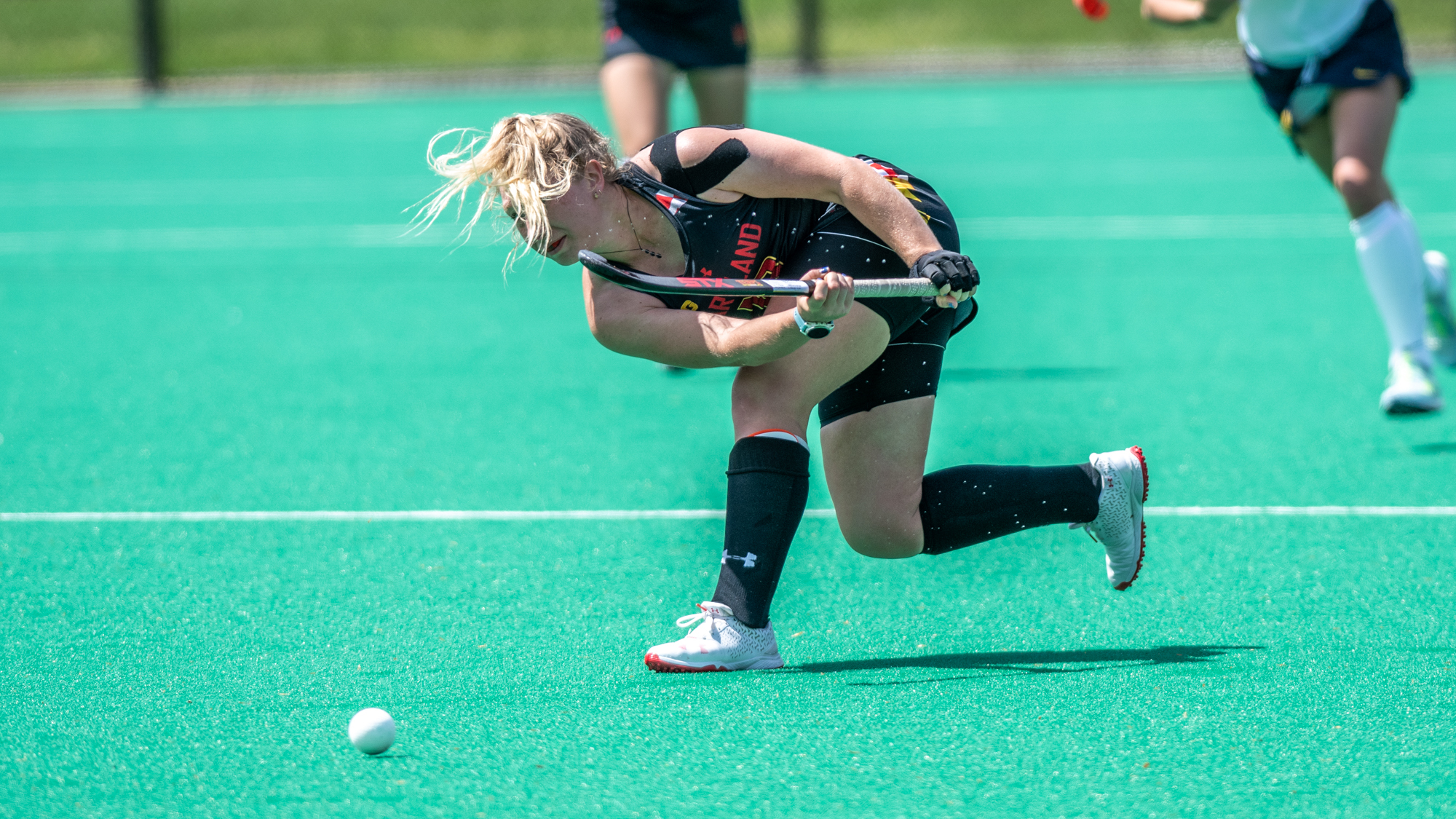 Michigan senior Halle O’Neill handled a penalty corner insertion early in the fourth quarter. She swung a pass to the other side of the circle, finding Katie Anderson. The junior forward fed the ball right over to Anouk Veen, who launched a rocket into the back of the cage.

The Wolverines on the pitch jumped around and hugged each other. Their fans in the bleachers erupted in cheers. And after video review overruled the goal that was initially waved off, Michigan jumped out to a 2-0 lead over Maryland field hockey, one it wouldn’t look back from on a scorching hot, sunny early afternoon.

The Terps outshot the Wolverines, 13-6. Maryland drew seven penalty corners against its opponent’s three. Goalkeeper Noelle Frost didn’t have to make a save. Yet it was the No. 5-ranked team in the nation that prevailed, downing coach Missy Meharg’s squad after an impressive Anna Spieker performance.

“I feel a little déjà vu from yesterday’s game from a standpoint of dominating the stats,” Meharg said.

The Terps seemed to lack leadership as senior captain Brooke DeBerdine missed the first match of her Terps career due to injury. And in the absence of its star player, Maryland succumbed to a more opportunistic Wolverines side.

Michigan’s offense quickly began attacking. It drew a penalty corner just 52 seconds into the match, and Kayla Reed nearly buried the shot. Under a minute later, it missed again from another corner.

After the Wolverines’ explosive start, neither team could get much offense going for most of the first quarter. Maryland drew its first corner 11 minutes in, and a Taylor Mason shot was blocked.

Early in the second quarter, the Terps earned a pair of corners themselves. Both times, Riley Donnelly took the shots, and each of them missed.

“We’re just not on target from beginning to end,” Meharg said.

And just over five minutes into the second quarter, Maryland thought it had the breakthrough it needed. The Terps crowd in the Field Hockey and Lacrosse Complex thought it did, too. But groans were heard around the facility when Mayv Clune’s shot fell just off the mark.

As Maryland’s crowd lamented the miss for a moment, the Wolverines drove down the pitch. And Michigan forward Tina D’Angollel flipped a shot into the cage past goalkeeper Noelle Frost, bringing the Wolverines’ contingent on the right side of the bleachers to life — and giving them a 1-0 lead.

As the second half got rolling, the Terps tried to cut through Michigan’s defense. Early in the quarter, Clune fired a shot that was calmly dealt with by Spieker.

Maryland drew a corner in the third quarter, as well. But once again, Spieker came up big, stuffing Donnelly’s attempt to keep the Wolverines one-goal edge intact.

“We could’ve been more effective in the way we push out and execute on corners,” midfielder Nathalie Fiechter said.

Another penalty corner opportunity presented itself in the dying moments of the frame, offering the Terps a chance to show off a new look. Donnelly teed the ball up, eventually falling into the path of Mason.

But she couldn’t find a corner and the ball sailed wide.

The Terps took the pitch for the fourth quarter, seeing themselves down 1-0 on the scoreboard despite holding a sizable advantage on shots (10-4) and penalty corners (5-2).

And the Wolverines would soon pounce on Maryland’s inefficiency in front of the cage.

After several passes, Veen rifled a bouncing shot into the cage, igniting the Wolverines’ crowd. It needed a review, but Michigan led 2-0 with 12 minutes remaining

Maryland had a final foray forward, but couldn’t capitalize on any clear chances — dropping its second straight to the Big Ten-leading Wolverines.

“We had a lot of shots today, a lot of corners,” Fiechter said. “We need to work on capitalizing on them.”