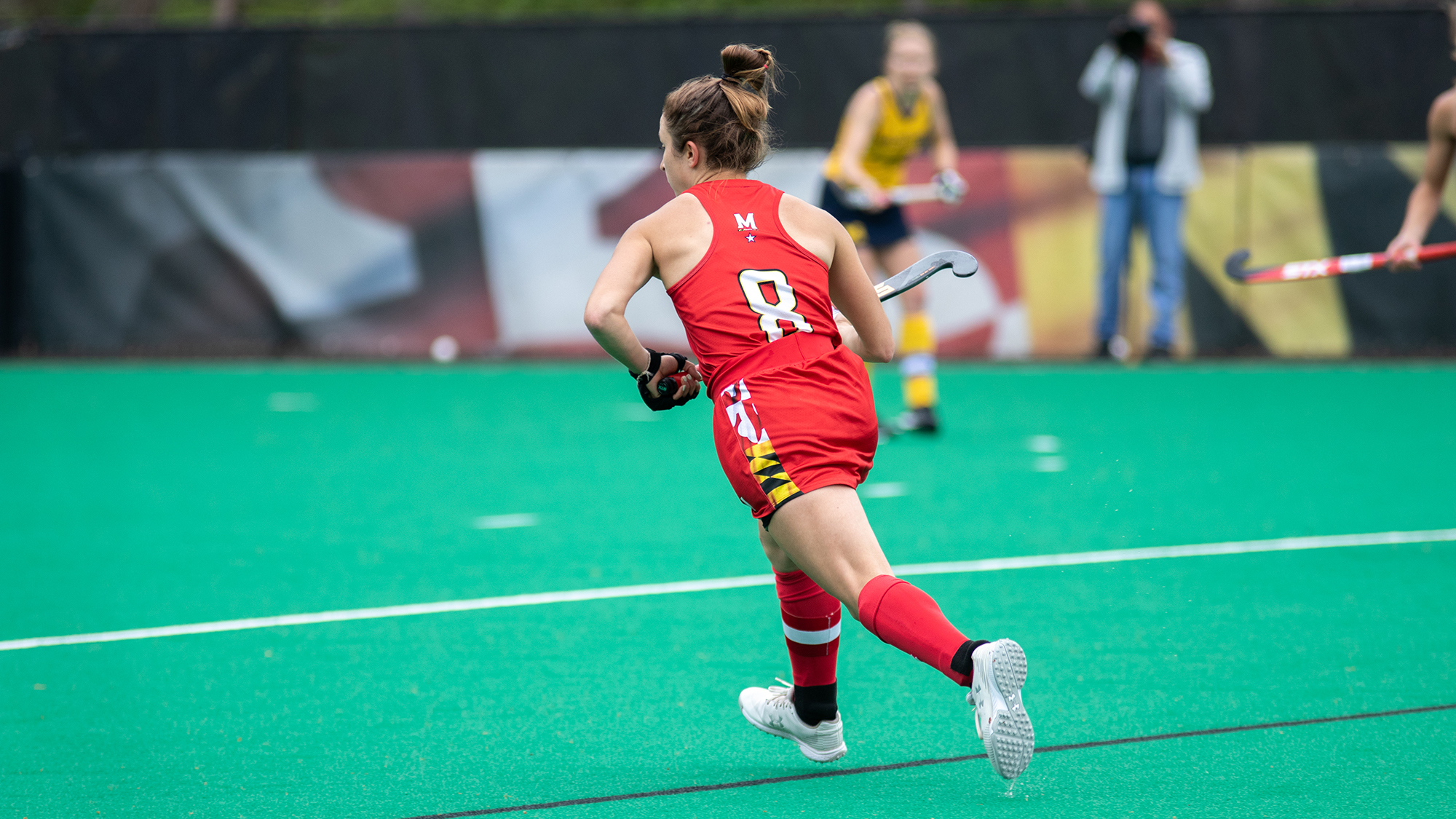 With just under a minute left in regulation, No. 11 Maryland field hockey’s bench jumped up and down in celebration. The Terps had a chance to knot the action-packed match with No. 5 Michigan, notching a late penalty corner.

Bibi Donraadt handled the insertion, as always. As has been the case on corners, Natalie Fiechter crouched down and extended her stick as Riley Donnelly readied behind her. Maura Verleg snuck over to her left, and the sophomore ended up on the receiving end of the pass.

It looked like Verleg had an open look. But Michigan forward Tina D’Anjolell crept up from inside the cage and deflected Verleg’s shot, sending the Wolverines’ large crowd on hand at the Field Hockey and Lacrosse Complex into a frenzy as its team downed Maryland, 2-1.

With an increased number of spectators now permitted at sporting events, Michigan’s supporters showed up in full force. From the moment the Wolverines’ starting lineup was introduced, the maize and blue’s section was bouncing.

“This program is a very family-oriented program,” forward Taylor Mason said. “[Having family members in attendance] really adds to the hype before the game and during the game.”

Similar to the opening minutes of action in Maryland’s (6-5) 1-0 shutout of Iowa last Friday, defenses shined during the opening period. Despite multiple drives down the pitch, neither Michigan (8-2) nor the Terps got a shot off for nearly eight minutes.

With a little more than two minutes to play in the first, Michigan drew the game’s first penalty corner. Kathryn Peterson inserted the ball for an Anouk Veen shot, which sailed too high off the back wall, keeping the game scoreless.

Peterson continued to threaten the Terps, though. And about five minutes into the second quarter, it was Peterson who cut through Maryland’s defense to open the scoring for Michigan.

Peterson navigated her way past multiple defenders and stepped inside the shooting circle to launch a backhanded shot toward the cage.

Sarah Pyrtek dashed in front of Terps goalkeeper Noelle Frost as Peterson’s effort approached the net. The sophomore lifted her stick and pushed the flying ball past Frost as Michigan’s large crowd at the Field Hockey and Lacrosse Complex erupted in cheers.

The Wolverines headed to the locker room with a 1-0 lead following Pyrtek’s strike. And they would continue to pepper Frost in the third.

Peterson, Katie Anderson and Kate Burney all took shots in the opening portion of the second half. Frost padded the shots away as Michigan drew another penalty corner.

“[Frost is] bringing so much seniority and high-save ability to our squad,” Meharg said.

It didn’t try to shoot the ball immediately. Instead, the Wolverines passed the ball around in front of the cage. Eventually, Pyrtek thought she connected for her second goal of the day when she delivered a backhanded smack into the back of the cage, but the shot was waved off.

The goalmouth action continued on the other end of the pitch. Donnelly saw a drag flick whistle wide as the quarter inched on.

And shortly after, the bleachers at The ‘Plex rumbled once more, this time for a Maryland score. Mayv Clune found some daylight, sending a pass from the circle to an open Mason. The junior buried the shot before she and her teammates jumped around in celebration.

“I’m proud of our team, and certainly Taylor Mason on finishing a beautiful goal,” Meharg said.

The Wolverines responded with fervor, though, continuing to pressure Frost’s cage as the quarter rolled on. With 16 seconds left in the frame, they were rewarded.

Maya Gompper dragged a shot toward the cage, falling right into the path of Lora Clarke. Clarke tapped the ball in from close range, giving the Wolverines a 2-1 advantage heading into the fourth quarter.

“Both goals were deflections, and those are the hardest,” Meharg said.

Maryland’s offense continued to try to break through the wall of maize-clad defenders. Brooke DeBerdine had a shot blocked. Clune saw a strike veer out. A Donraadt effort ricocheted off the post.

But Meharg’s squad had no answer for Spieker and the Wolverines. Meharg pulled Frost, looking to spark some life into Maryland’s dormant offense.

But it didn’t come to pass, as the Spieker-led defensive unit shut the door to send the Terps to their fifth loss of the season.

“We’re disappointed in the outcome of the match, but the product couldn’t have been more resilient, more committed,” Meharg said. “The team follows the game plan to a tee.”