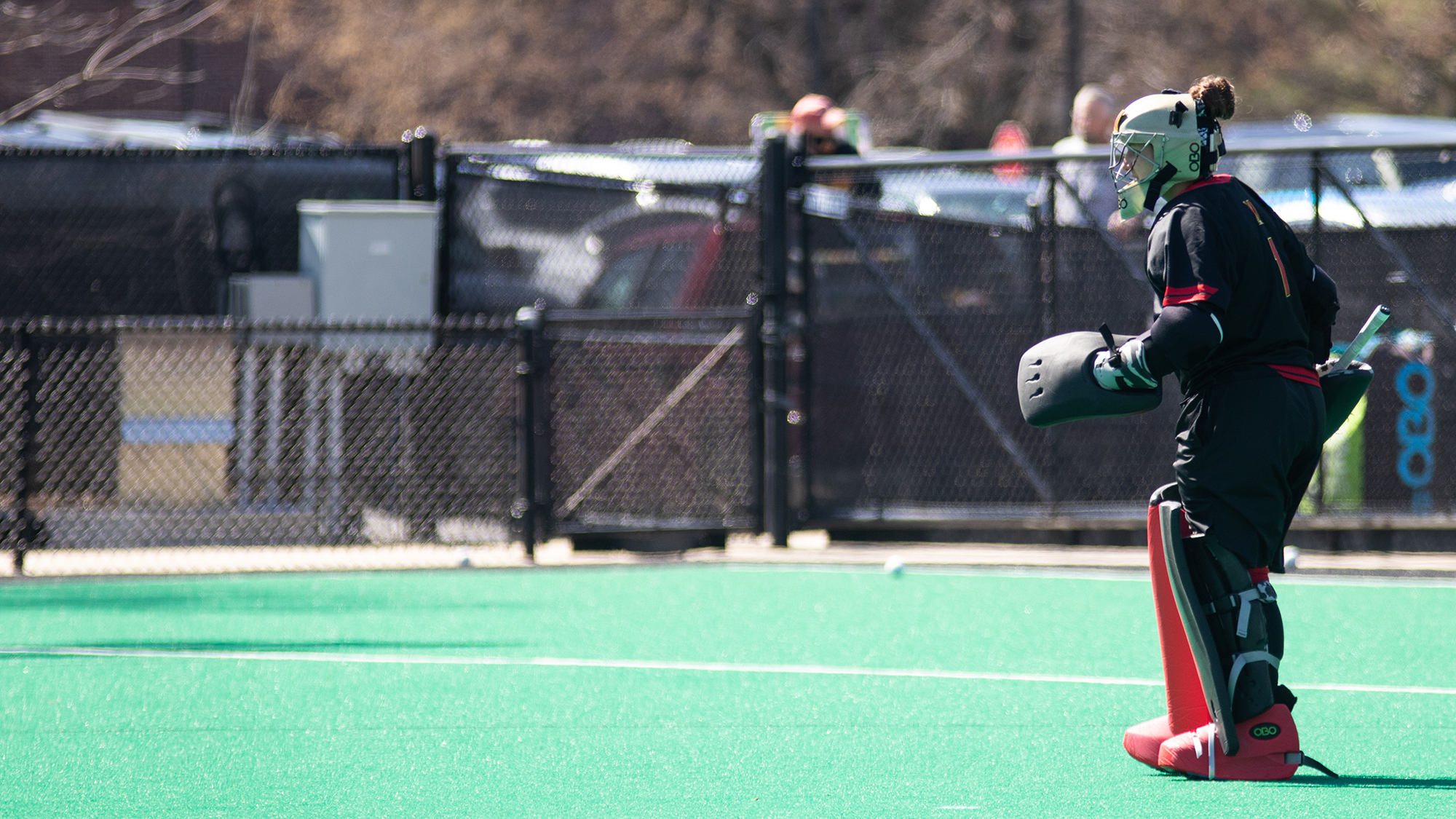 Goalkeeper Noelle Frost stands outside her goal during Maryland field hockey’s 3-1 win over Indiana on March 21, 2021. (Julia Nikhinson/ The Diamondback)

When No. 13 Maryland field hockey went up against No. 2 Iowa on Friday evening, the Terps knew it would be a challenge. The Hawkeyes entered the weekend outscoring their opponents, 17-4, and had compiled a dominant 9-1 record.

Goalkeeper Noelle Frost is very familiar with these situations, having been with Maryland since 2016. She had made 128 saves entering the weekend.

And on Friday, she thrived. The Glenwood native stopped all five shots from a strong Iowa attack as the Terps pulled off a shutout.

“Noelle recognizes when she’s gonna have to make a save,” coach Missy Meharg said. “And she’s always very, very gracious to her teammates.”

After first seeing action in a match against Towson back in 2017, Frost became Maryland’s primary goalkeeper when she started every game of the 2019 campaign. During that season, she totaled eight shutouts and stopped 80.6 percent of shots.

She didn’t have to come back to play this spring season. And before the season, Meharg pointed out how thrilled she was that Frost — along with Brooke DeBerdine and Kyler Greenwalt — did.

“I don’t know how many players around the country are choosing to stay and play,” Meharg said. “But I can tell you, I have not witnessed women work as hard and committed and as selfless as Brooke, Noelle and Kyler have.”

As this season has rolled on, Frost has continued to succeed in the cage. Her 47 saves rank second in the Big Ten. She’s also pitched three shutouts, which ranks fourth in the conference.

After the defenses shone in a shotless first quarter of Friday’s match in Iowa City, Iowa, the Hawkeyes’ offense found its rhythm. About seven minutes into the second quarter, Iowa had fired off five shots against just one from Maryland.

The Hawkeyes’ Maddy Murphy — whose seven goals on the season lead the Big Ten — took two shots at Frost. But Frost hopped out of the cage and instinctively knew how to handle each shot she faced.

Sometimes, she’d use a kick save, and other times, she’d reach her stick out and swat the ball away — but every time, she stopped Iowa from scoring.

That success has come by grinding in practice. She noted the training she’s been completing with assistant coach Marvin Bam as she’s improving her ability to bounce out of the cage when needed.

“He’s been working seriously with us, forcing us to come out, just break down the angle,” Frost said. “If they have a rebound or shot within six feet of us, he always wants us to come out.”

She delivered on that work against an elite squad. Those lessons helped Frost pitch a shutout against the No. 2 team in the nation.

And even though the Hawkeyes broke through in the Sunday rematch to win, the opponent’s caliber and ranking did not faze Meharg, Frost or anyone else on the team.

“We don’t look at the numbers or the rankings,” Frost said. “We more or less go, ‘This is Iowa.’ We look at them as a team, not the number.”