One year after campus shut down, Studio A is still creating 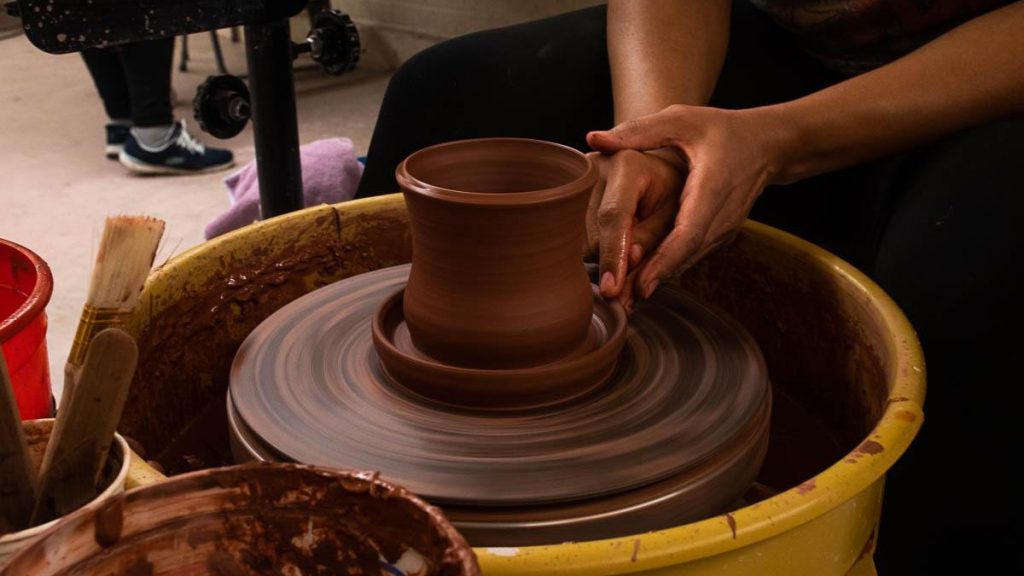 Hybrid in-person activities and studio time are still available at Studio A with reduced capacity. (Elana Morris/For The Diamondback)

Studio A has long been an escape from busy schedules and crowded dorms. The campus’ only darkroom and pottery studio are hidden right in the heart of campus, tucked away in the basement of the Stamp Student Union, where the art center offers non-credit art classes in mediums including painting, drawing, photography and dance.

Last spring brought all campus activities to a screeching halt, leaving the arts community to test its creativity in staying alive online. When the campus shuttered and the world turned to Zoom, Studio A manager Tara Youngborg and the instructors had to do some “creative rethinking.”

The Studio A space and programs had to be reimagined. After getting through the spring 2020 semester with some virtual offerings and DIY videos, plans developed over the summer to make Studio A thrive in virtual, hybrid and in-person formats.

“We’ve managed to be able to be a space that’s physically open when much of campus really struggles with that,” said Youngborg. “It’s been definitely a beast of a year … but I am really grateful for the things that we’ve managed to learn and to pick up.”

Studio A has gone to great lengths to maintain some semblance of in-person workspaces. The team converted the computer lab into a second pottery studio to satisfy the demand for the studio’s most popular offering. The hybrid format has also allowed students in photography classes to use Studio A’s darkroom but meet with a teacher online.

Still, activity at the studio is limited given university health and safety restrictions. Even with a second pottery studio, only five students can be working at a time. Only one is allowed in the darkroom. Most of Studio A’s operations are still virtual, not unlike the rest of the campus community.

“I liked seeing people come in and find what they were passionate about,” said Comfort Fabode, a senior hearing and speech sciences major and a Studio A front desk attendant.

After long days staring at a screen, students may be less inclined to branch out and join a drawing class, especially if they do not have experience. While Studio A hasn’t struggled to fill spots for its in-person offerings, Youngborg did notice that participants’ enthusiasm does not always translate to the online format. That is understandable and expected. Zoom fatigue is real.

“When you’re staring at a screen for hours upon hours, being able to move to something that’s in the physical world, you’re using different muscles and your eyes are relaxing and resting in a different way if you’re painting,” said Youngborg.

[This College Park-area liquor store has the best deals]

Staying away from screens when possible is certainly therapeutic, so Studio A has offered DIY kits for students to take home and work on. They have planned outdoor craft events for the end of the semester, too. Other groups, like Graduate Student Life and Transfer and Off Campus Student Life, have tried to take advantage of Studio A’s facilities and supplies to hold in-person events too. Transfer and Off Campus Student Life held their monthly art night in the large studio Wednesday.

Studio A was buried deep in Stamp before the pandemic, but less activity in the student union and on the campus leaves on-campus students with fewer chances to find the hidden treasure. Because of this, Fabode explained, Studio A has been using Instagram more. The studio especially wants to reach students who have never experienced a campus fully open, some of whom have been attracted to the free in-person activities. Youngborg said they redesigned their email announcements to include activities too.

While its creativity has certainly been challenged by the pandemic, Studio A’s social media presence and new offerings like grab-and-go kits will not go away.

“We had to creatively rethink what we do, and I don’t want to get rid of all that when we can have 100 people in our large studio again,” said Youngborg.