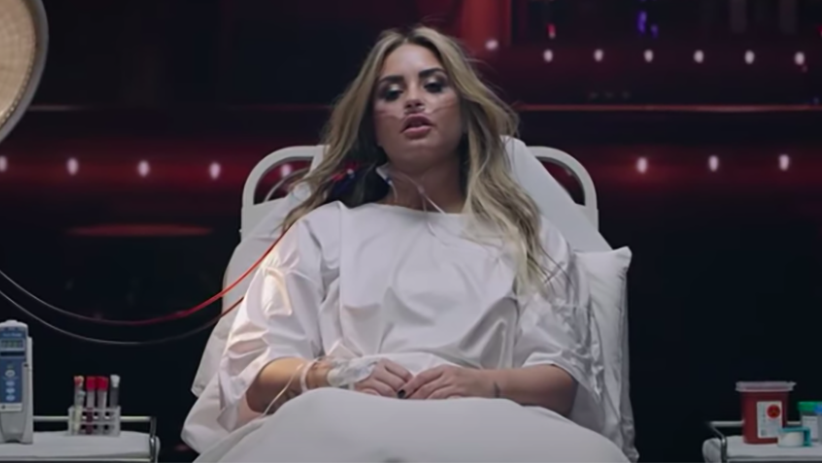 "Dancing With the Devil" is a single off the album. (Screenshot via YouTube)

It’s no secret that Demi Lovato has come a long way since her Disney Channel days alongside pals Selena Gomez, Miley Cyrus and the Jonas Brothers. Like the others, Lovato has dramatically branched out from the childhood goody-two-shoes image, purity rings and all.

Lovato’s newest album is yet another rebirth — this time coming out of a near-fatal drug overdose in 2018. The lyrics are painfully honest and heartbreaking. The new album Dancing With The Devil… The Art of Starting Over was accompanied by a YouTube docu-series focused on the overdose, told in her own words and from those closest to her. Not only does it cover the trauma of the experience, but it also delves into the events leading up to it and the circumstances of her addiction.

It’s a profound, intimate look at mental health combined with a look at the celebrity lifestyle, and it’s certainly worth a watch. But the album is another story.

DWTDTAOSO is a beautifully frank album. It’s a sharp turn from her last project, 2017’s Tell Me You Love Me, which featured every romantic platitude in the book. Although the lyrics are generally refreshing and the vocal performances are astounding, the album overall feels sonically disjointed. I’m not necessarily upset with an album that displays variety in its sound, but everything here feels like she was holding back.

One of the best tracks is “Met Him Last Night,” featuring Ariana Grande. It displays strong hip-hop influences, relying on more digital sounds making it stick out from the rest of the project, which relies heavily on classic instrumentation: guitar, piano, bass and drums.

[Lil Nas X’s “Montero” and the concept of “respectable queerness”]

“The Art Of Starting Over” is another highlight — a laidback, groovy track that brought forth memories of rolling down the windows in the summer, though its sound is sometimes at at odds with its somber lyrics. “The Way You Don’t Look At Me” reminds me of folk-pop, a poor attempt at replicating Taylor Swift’s recent releases.

While piano or guitar ballads pad the album at every turn, “Dancing With The Devil” is so much more, with no counterpart in its magnitude. It exhibits another compelling performance with its songwriting. This song in particular reminds me strongly of a James Bond theme, not unlike Billie Eilish’s “No Time To Die” or Adele’s “Skyfall.” The orchestral backing introduced an enjoyable component at the top of the record that really wasn’t reintroduced anywhere else.

None of these are inherently bad ideas — quite the opposite, actually. It just feels like Lovato is toying with these different concepts but is afraid to fully commit, so she keeps falling back on her tried and true formula: incredible singing over an underdeveloped instrumental.

I would love to see what could happen if she fully devoted herself to exploring these different avenues. I was expecting new developments because she’s already experimented with many of these, such as the trap beats, on previous projects.

The project also runs a little slow and repetitive, which I found curious considering she has so much to talk about. The songwriting just falls a little flat for pop standards. For example, “Lonely People” has forceful verses that are completely overridden by a derivative melody, uninspiring instrumental and mind-numbing chorus. I struggle to see what will push this album ahead of current superstars like Dua Lipa or even newcomers like Olivia Rodrigo.

[The ‘Trouble’ of being a lifelong Swiftie]

Out of the ballads, “Anyone” and her duets with Sam Fischer (“What Other People Say”) and Noah Cyrus (“Easy”) are the most compelling. I was excited to see a cover of Tears for Fears’ “Mad World” on the track list. While that song in particular fits with the themes presented, I don’t think her take stands up to more popular covers such as Gary Jules’.

In addition to some lackluster style choices, Lovato’s new release also brought along grander issues concerning its content. For example, the music video for “Dancing With The Devil” received some controversy, as some former users felt the reenactment of her overdose was in poor taste. “California Sober” also raised some eyebrows about the efficacy of her recovery method.

Dancing With The Devil… The Art of Starting Over brings great ideas and a great message, but ultimately falls flat in comparison to other acts in the pop genre. For an album with strong lyrics about reimagining oneself, the accompanying instrumentals largely disappoint and are best left as ash in the wake of the phoenix.