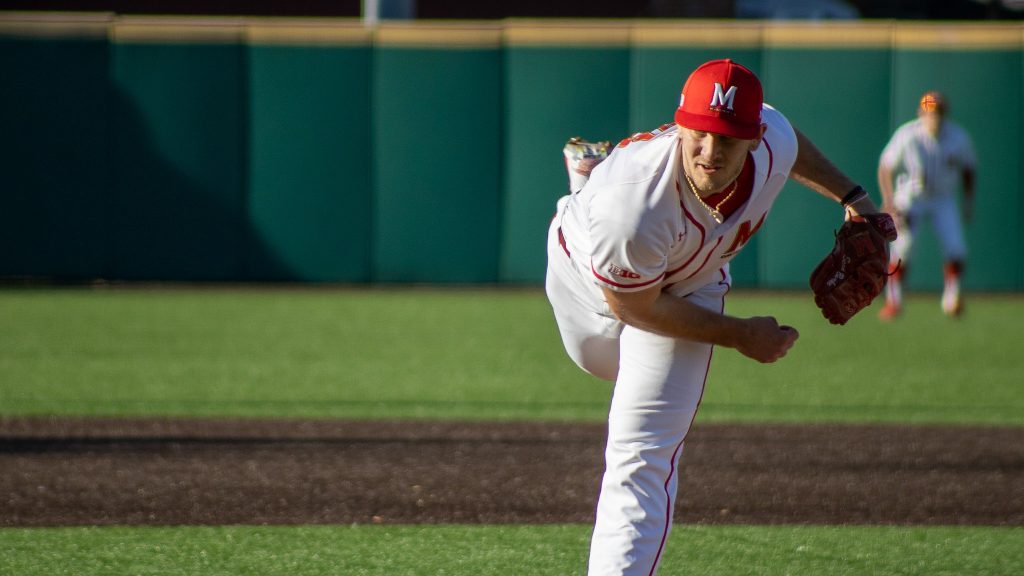 With a 1-2 count and two outs in the ninth, all Maryland baseball’s Randy Bednar could do was swing for the fences. Yet, as it had all night, Bednar’s effort pierced through clean air.

The senior could only peer down and grab the bat by the barrel as he walked away dejected. The Terps slunked away with a 6-2 loss Friday night, unable to match Nebraska’s potency at the plate.

After underwhelming in his last few outings, Sean Burke wanted to come out hot against Nebraska. Instead, Joe Acker led off with a double, and the Cornhuskers rotated him around the bases to sneak ahead for an early lead.

Then, Burke settled down. He struck out five batters in the first four innings, though he got little help from Maryland’s offense. That changed when Luke Shliger connected on an outside fastball to help Maryland get runners on in the fourth.

With Shliger on second and Max Costes on third, Nebraska pitcher Cade Povich walked consecutive batters, knotting the score at one. Justin Vought had a shot to get more runs with the bases loaded, but Povich struck him out to end the inning.

As Povich and Burke went batter-for-batter, one of them were bound to concede some runs against two powerful lineups. And it would be Burke, in unusual fashion.

Acker repeatedly faked bunts throughout his at-bat against Burke and it did the trick for Nebraska. Matt Shaw crept up the third-base line in response and Acker proceeded to hit a ground ball right in the space Shaw had vacated.

“They just executed it perfectly and chopped it right over his head,” Vaughn said. “[It’s] my job to make sure we clean that up and make that adjustment for tomorrow.”

Acker’s double set the stage for the Cornhuskers, who would take off from there. A Spencer Schwellenbach single brought two runners home and a wild pitch led to another run. Vought missed the target when trying to throw Schwellenbach out at third, and he came home to score to push Nebraska’s lead to three.

Despite the Cornhuskers’ fifth-inning fireworks, Burke came out for the sixth. And it nearly paid off for the Terps, at least until second baseman Brice Matthews slugged a tired fastball over the outfield wall — just beyond Chris Alleyne’s reach.

“I was a little late getting to the wall,” Alleyne said. “The wind blew it over the fence…just not close enough.”

Sean Heine entered the game for Maryland, getting it out the inning without any further damage. But, down four runs to one of the Big Ten’s elite programs, it seemed the Terps had a mountain to climb.

Vought helped cut into the Cornhuskers’ advantage in the seventh, cracking a solo shot into the stands. Still, Nebraska was fairly comfortable. Right-hander Cam Wynne came in for Povich following Vought’s homer and helped the Cornhuskers tightrope out of the inning with two runners on.

Southpaw Jake Bunz followed up with an easy eighth, striking out Ben Cowles and Tucker Flint after coming in to replace Wynne.

Then there was Schwellenbach, who took over for Bunz in the ninth. And just as he did in the fifth, he took control, striking out two batters to push Nebraska out in front in the series.

It’s another loss for Maryland, which is still seeking consistency after claiming three of four last weekend against Northwestern and Michigan.

Still, it’s a task easier said than done, especially when playing against one of the conference’s best.

“Just got to learn from it, come back tomorrow and try to get the series back to even,” Vought said.