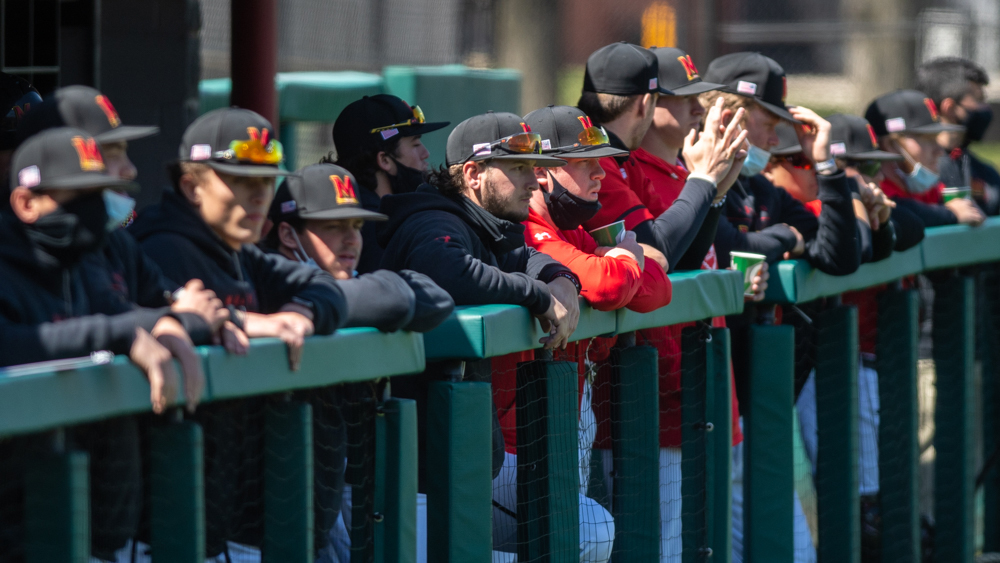 Maryland baseball during the Terps' 17-7 win over Michigan on April 5, 2021. (Joe Ryan/The Diamondback)

Nebraska is more than just a Big Ten rival for Maryland baseball and coach Rob Vaughn.

Vaugh grew up competing with them. Vaughn played catcher at Kansas State and had the opportunity to play the Cornhuskers a few times when they were in the Big 12.

That relationship has only grown in the years since, partly due to intertwining history between Vaughn’s coaching mentors and the program.

Andy Sawyers was the Cornhuskers hitting coach back in 2007, standing in the dugout as Nebraska took on Vaughn’s Kansas State. Two years later, he would take a position with the Wildcats, imparting a certain coaching philosophy on Vaughn.

During Sawyers’ lengthy Cornhuskers career, he provided countless hitters with a similar experience. One of his pupils was Will Bolt, Nebraska’s former captain and talisman when the Cornhuskers secured back-to-back College World Series appearances in 2001 and 2002.

Now, Bolt is the Cornhuskers coach. And when Maryland takes on Nebraska, it will be a matchup between two coaches who are bonded by their coaching pasts.

“Will Bolt is a really good coach, him and I were brought up in the same family tree,” Vaughn said. “Andy Sawyers, Rob Childress, those guys are the people that brought us up in the game.”

Sawyers’ influence is clear in the way both teams play. The Terps and Cornhuskers have similar philosophies regarding their teams and their style of baseball.

“They run a similar type offense … they have that pack idea,” Vaughn said.

The statistics don’t lie. Nebraska, like Maryland, has several hitters with more than one home run. Most maintain at least a .250 batting average.

In fact, the Cornhuskers have impressed at the plate, posting a team-wide batting average of .292, 30 points better than the Terps. As a result, Nebraska has raced out to a 13-5 record, pouncing on opposition pitching to blow teams away. The Cornhuskers have scored at least 10 runs in seven games so far.

Much of Nebraska’s potency comes from an unpredictable approach at the plate. The Cornhuskers try to get on base by any means to force defensive mistakes.

“Nebraska is gonna thrive on trying to create chaos, that’s what they do,” Vaughn said. “They bunt a ton … they thrive on mistakes, they put a lot of pressure on the defense.”

Maryland has proven less explosive at times, struggling to maintain consistency with the bat in its hands. Still, Bolt is wary of the Terps’ threat — one fostered after years of practice and study by Vaughn and his coaching staff.

“Maryland, I think they’ve got top to bottom, probably if not the best, one of the best rosters in terms of pure talent,” Bolt said.

The Terps will have to take a plane on their more than 1,200 mile journey to an unfamiliar Midwestern atmosphere. It will be their longest journey to an away game this season so far.

There, they will play the Cornhuskers, a team Maryland hasn’t met yet this season. But it won’t be too unfamiliar for Vaughn.

Instead, it’ll be another chance for Vaughn and Bolt to show off their coaching chops, tactics developed under Sawyers’ watchful gaze at Nebraska and Kansas State, respectively.