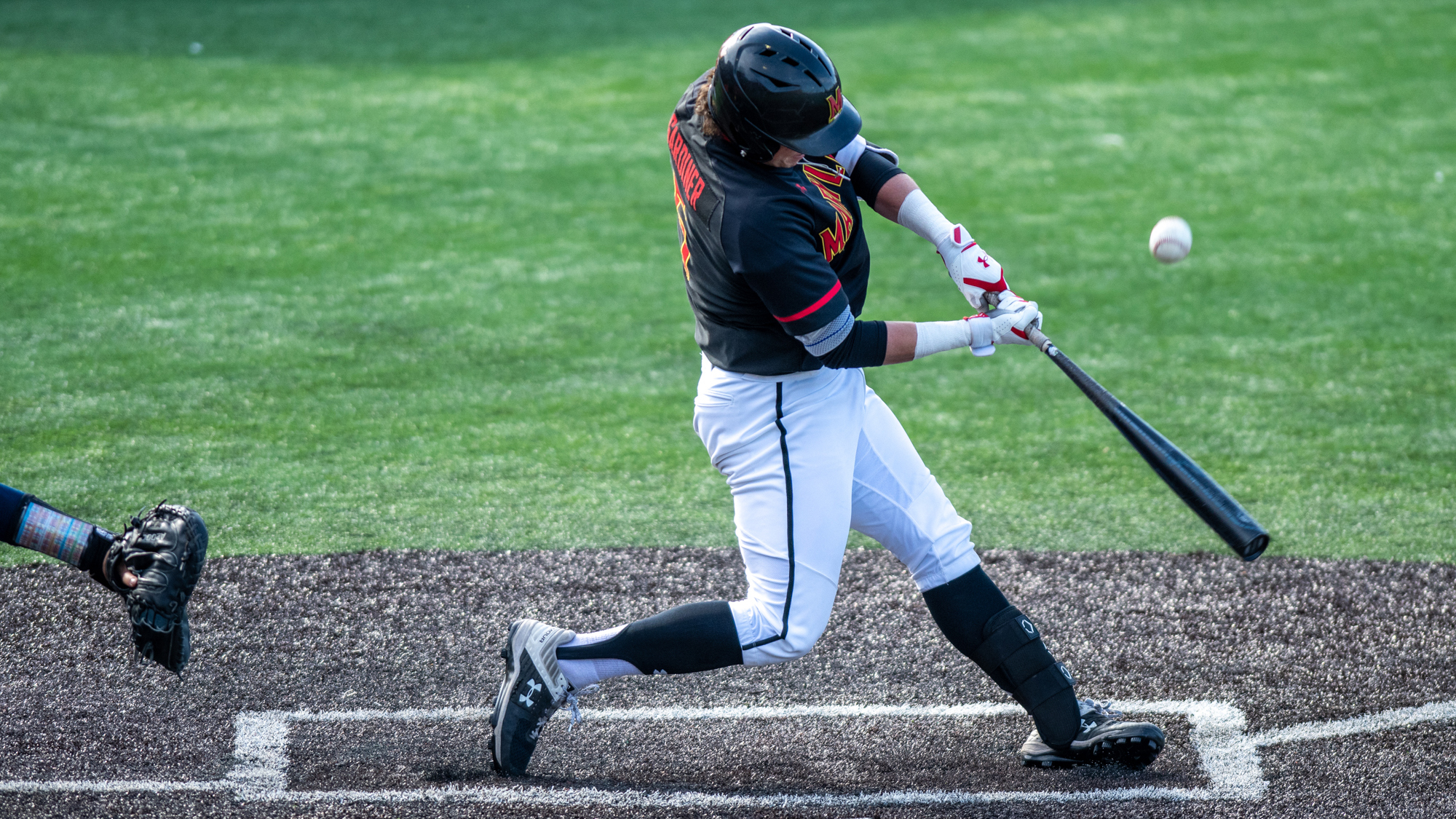 Tommy Gardiner connects with a pitch during Maryland baseball’s 17-7 win over No. 25 Michigan on April 5, 2021. (Joe Ryan/The Diamondback)

Michigan’s center fielder had been creeping up while Tommy Gardiner was at the plate. The Wolverines even brought their infield back, expecting a hard-hit ground ball from the small-statured infielder.

With a 3-1 count, Gardiner likely knew a fastball was coming — and he was going to swing.

And he did so, cracking the ball off his bat and sending it soaring high over the centerfield wall, as the Michigan outfield could only watch.

It was one of Gardiner’s three home runs during a stretch that saw Maryland baseball garner a 4-1 record through its last five games. For many players, that would be a good run.

But for Gardiner, it’s more than that. The senior’s home run back on March 13 against Rutgers was his first since midway through his senior year of high school. Gardiner has always been known more for his fielding: He’s only committed one error so far this season in the infield. But now, the senior has found a rhythm with the bat.

His hot run has been the most key part of this stretch for the Terps. Each of his three home runs have had significant meaning to each game.

Against Northwestern, Gardiner’s two-RBI home run gave the team its  first lead of the contest. Against Ohio State, he started the scoring with a solo home run in a game where Maryland didn’t otherwise score in the first four innings.

And then, there was Michigan.

Gardiner went yard to start a 14-3 scoring run for a Terps squad trailing 4-1 against a top team in the Big Ten. Maryland could have rolled over against a team that has figured it out every year on the diamond.

“Tommy’s home run was huge,” outfielder Tucker Flint said. “We always talk about bounceback response after they put up some runs … [it] put us right back in the game.”

Though Gardiner isn’t among the Terps’ statistically best — Benjamin Cowles and Randy Bednar are the stars there — he’s helped the Terps enforce their “pack mentality” that coach Rob Vaughn preaches on a daily basis. Part of that mentality is their lineup’s ability to perform from top to bottom.

“[Coach Vaughn] calls the offense the pack. In a wolf pack, there’s no one person that is solely doing anything,” infielder Maxwell Costes said. “All of us are working toward the same goal.”

And while there are players that stand out in their lineup at the plate, the majority of their usual hitters don’t have a batting average lower than a respectable .250.

With pitching that has been up and down, Maryland needs to be an outlier at the plate to boost its chances of scraping the top of the standings in the Big Ten.

Gardiner usually bats at the bottom of the Terps’ lineup, a spot reserved for fielder-first types of players. To keep rising, Maryland will need him.

The New Jersey native was the smallest player on the field Monday. But for the Terps’ future at the plate, he will loom the largest.