Maryland softball takes one of two from Northwestern in doubleheader 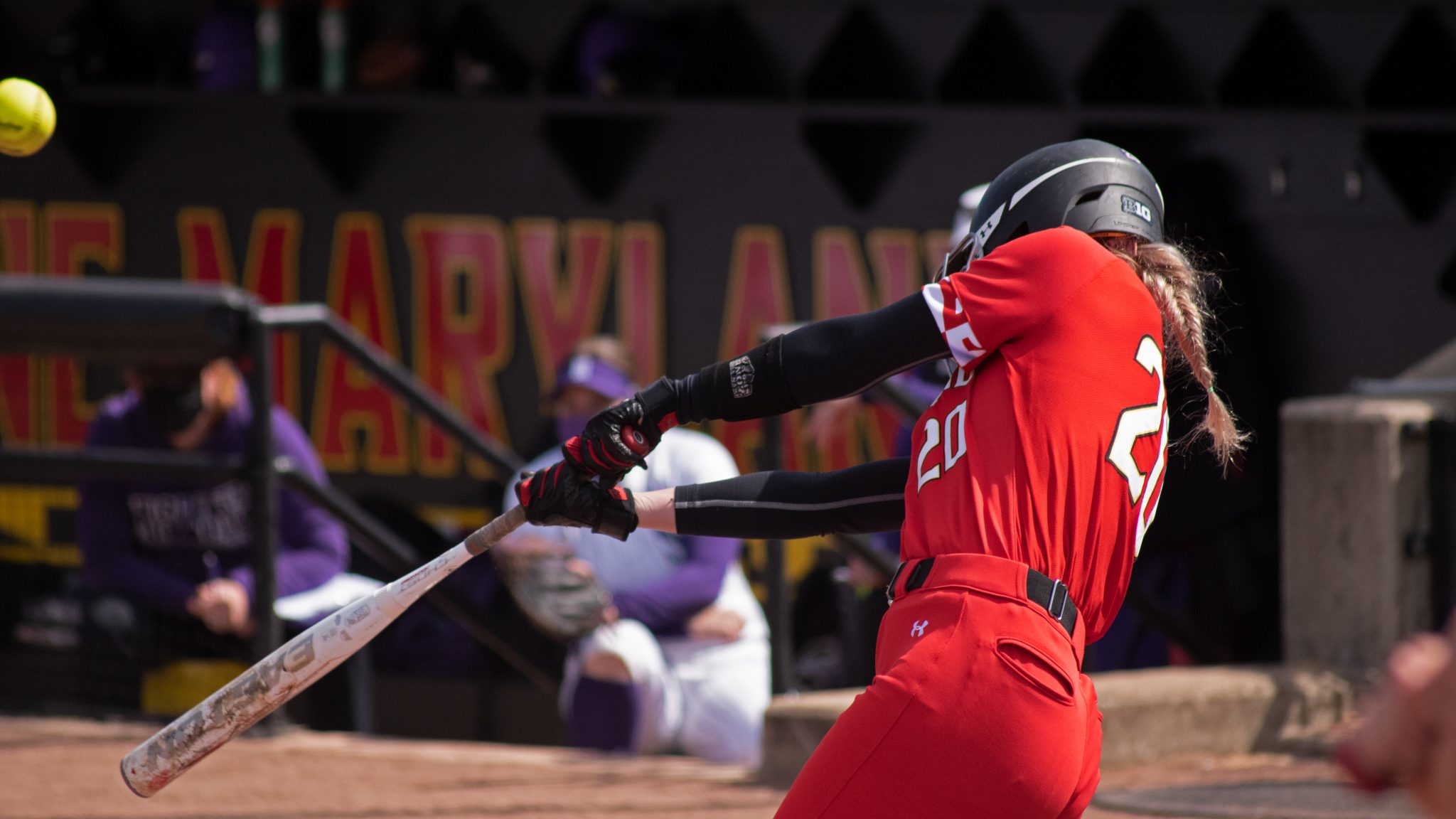 It was 3-2 in the seventh inning at the Maryland Softball Complex. Jaeda McFarland stepped into the batter’s box looking to tie the game for the Terps.

The ball soared over the center-field fence and McFarland jumped in celebration. She had tied the game. But the Terps weren’t done — Taylor Okada was ready to finish the job.

She smoked the ball to the right-field fence and sprinted around the bases to third — giving Haley Ellefson a chance to win it.

Ellefson’s ball flew into left field. Okada waited for the right moment. She tagged up on third and bolted to the plate.

And Okada crossed to walk it off for the Terps — sending the home crowd into raptures.

After its home opener and third consecutive mercy-rule loss, Maryland softball was fighting for redemption. And the Terps got it. They snapped Northwestern’s seven-game win streak and handed them their second loss of the season while winning their first home game in 712 days, 4-3.

But Maryland needed late heroics to do so.

Northwestern hit first in the third inning. Rachel Lewis crushed a triple to the right-field fence to put herself in scoring position. And Maeve Nelson would swiftly hit her home.

The Terps took the lead in the fifth frame.

The bases were loaded for Ellefson. She knocked a shallow single to the infield and the Wildcats were all over it. They tried to throw JoJo McRae out at home. But they couldn’t beat her there. McRae scored and the bases were still loaded.

Katie Dustin took the plate looking to keep the momentum going. She hit another shallow grounder to the infield and was tagged before she reached first. But McFarland jumped on the play, taking off from third to score and hand Maryland the lead, 2-1.

Northwestern took back its lead in the sixth inning. There were two runners on for the Wildcats’ star pitcher, Williams.

She doubled to right field to send Angela Zedak and Sammy Stanley home to take a one-run lead, again.

It looked like the game was over for the Terps until the seventh inning when their bats came alive. McFarland, Okada and Ellefson were the perfect offensive storm to take the game from Northwestern.

The second contest of the day wasn’t nearly as close.

In the first frame, Jordyn Rudd homered to give the Wildcats a lead they didn’t relinquish. In the second, their offense exploded.

[After nearly two years away, Maryland softball is excited to play a home game again]

Angela Zedak crushed the second homer of the game over the fences to score another run for Northwestern. And the knocks kept coming. Skyler Shellmyer singled up the middle to score Mac Dunlap and advance Williams to third.

Lewis stepped into the box again and cleared the bases. She smoked a three-run homer out of the park, pushing the Wildcats’ lead to 6-0.

But in the bottom of the frame, the Terps made up some ground. Supple walked three consecutive batters to load the bases for Maryland. Her last pitch sailed outside, walking Ruby Butler to force Gracie Voulgaris home without a hit.

Newport then took the circle and walked two more batters. Campbell Kline and Taylor Liguori both walked home from third to cut the Terps’ deficit in half.

But that was all Maryland could muster. The Terps couldn’t claw all the way back as the Wildcats extended their lead again in the third.

Williams doubled to score Niki Cuchran, and Shellmyer singled and advanced to second on an error to score Williams. Lewis then clubbed her second homer of the game with Shellmyer on to put Northwestern ahead 10-3.

The defense tightened up the rest of the way, as neither offense broke through after that blast. The Wildcats got back to their winning ways, but not after a blip earlier in the afternoon courtesy of the Terps.