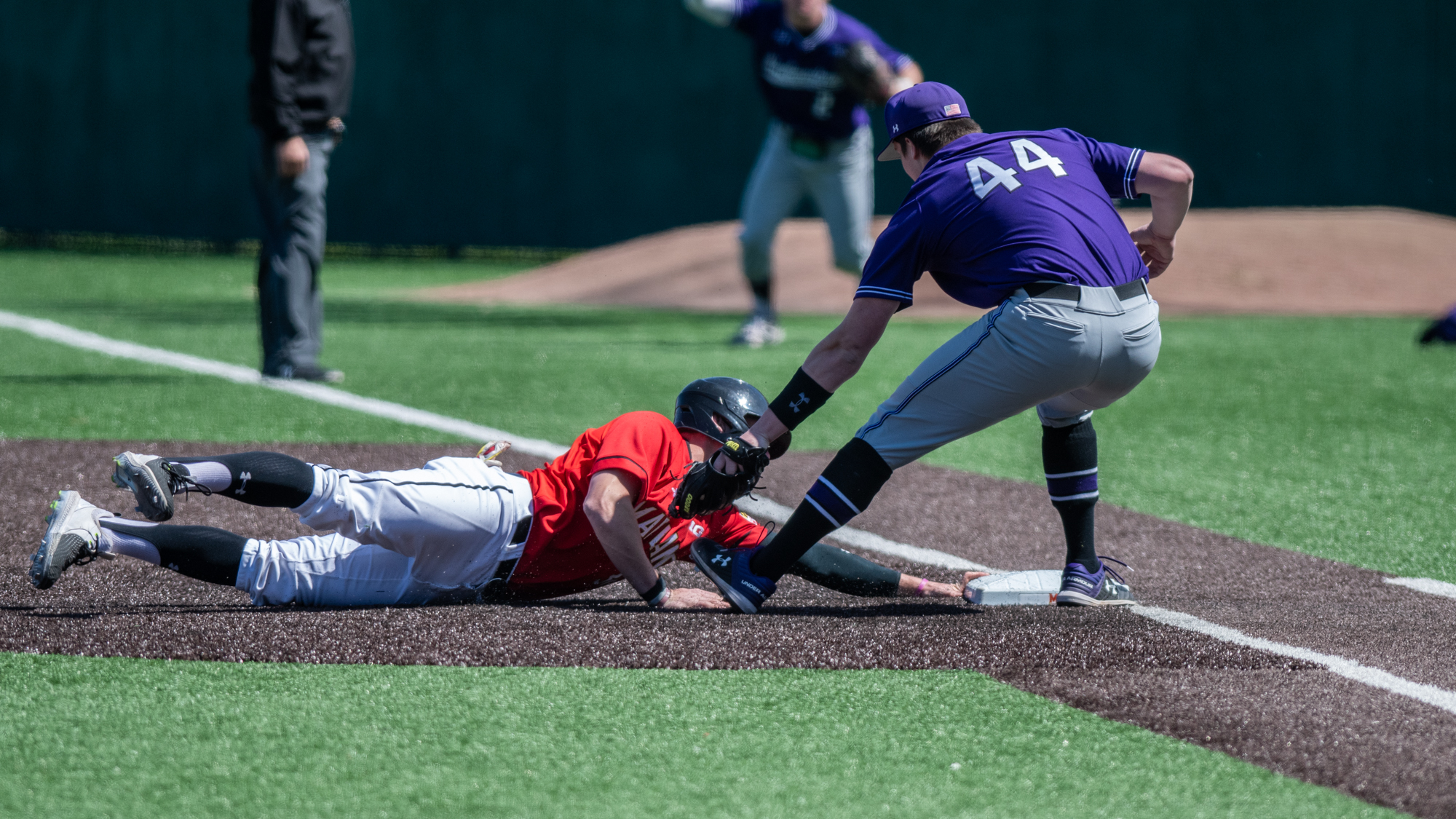 Left fielder Tucker Flint gets back to the bag during Maryland baseball's 8-4 win over Northwestern on April 3, 2021. (Joe Ryan/The Diamondback)

Sometimes, baseball just finds the right players in the right places. In the bottom of the sixth inning, with Maryland baseball down 4-3 and an out already recorded, Tommy Gardiner stepped up to the plate with a pair of runners at first and second base.

The lowest hitter in the Terps’ lineup, Gardiner was only hitting .231 entering the game. But at that moment, he was the right player. The senior knocked a grounder between the shortstop and third baseman that would score a run and tie the game.

It was part of a half inning in which Maryland scored three runs to take a one-run deficit and turn it into a two-run lead, an advantage it maintained the rest of the way in a 8-4 victory over Northwestern, their third win in a row.

“Tommy has been tremendous in his young season … it makes it a lot more dangerous when you have legitimate 27 really tough outs in your lineup,” coach Rob Vaughn said. “And I thought we got pretty close to doing that tonight.”

After Gardiner’s single, the Terps had a fielder’s choice and a walk to load the bases for Max Costes. The junior caught the ball early for one of his four hits in the game, pulling it into left field for a two-run single that gave the Terps the lead.

In the bottom of the fourth, a walk stuck between a pair of outs brought up the senior, who had a 3-0 count but took a pair of strikes to bring it full.

The payoff pitch was a fastball, one that Gardiner sent out just faster than it came in. The ball pinged as it leapt off his bat, rising as it flew into the outfield grass, comfortably clearing the wall for a two-run shot that gave Maryland its first lead of the afternoon, a 3-2 advantage.

“The pitch before was a little borderline, I thought it was outside for ball four,” Gardiner said. “So I just got back to locking in for the next pitch, and he threw me a fastball over the plate and I hit it pretty good.”

That wouldn’t last for long, as Nick Dean gave up a leadoff homer to Leo Kaplan in the fifth inning to knot the game at three. Dean, in just his second start of the year, went five innings and allowed three runs, all on homers. He struck out five, but struggled, much like the rest of the Terps, to close out innings.

Northwestern had four hits with two outs, two of them homers. The issues started in the top of the first inning, as Dean got a pair of flyouts before allowing a single and a towering Michael Trautwein home run to right field.

“[Dean] didn’t have his best, best, best command,” Vaughn said. “But shoot, you’re gonna tell me he can go out there and give up three [runs] to one of the best offenses in our league right now and give us a chance to win, I’ll take that all day.”

Ryan Ramsey entered the game in the sixth, and found himself in a similar situation. He would notch a pair of outs, the second coming on a wicked strikeout that left Northwestern’s David Dunn frozen at the plate.

[Maryland baseball’s pitching staff will be tested against Northwestern]

But Ramsey wouldn’t get through the inning unscathed, as Vincent Bianchina leapt at the first pitch, pulling it over the left field wall for a solo home run.

It’d be the only hit he’d allow in his four innings, taking over from Dean and finishing off the game with just one run allowed.

“It’s just nice with him because you can get some length out of him,” Vaughn said. “We couldn’t be more confident when we throw them out there right now.”

In Maryland’s last at-bats, it extended the lead even further. With the bases loaded once again, Costes dropped a looping single right in front of the Northwestern right fielder that would score a pair more runs, giving the junior four RBIs for the game.

In the top of the ninth, Maryland once again found themselves in the right place at the right time, as a hard hit line drive landed perfectly in Shaw’s glove. He turned and fired back to Costes at first for a double play.

A Ramsey strikeout later, the Terps found themselves in the best position of all, one they’ve been in for three straight outings: in a handshake line celebrating a victory.

“Like I said yesterday, Terps are hot man. I think Coach Vaughn says it all the time, sometimes it just takes that one game, that one inning where things just start to click,” he said. “I feel like right now everyone’s playing at the best of their abilities.”