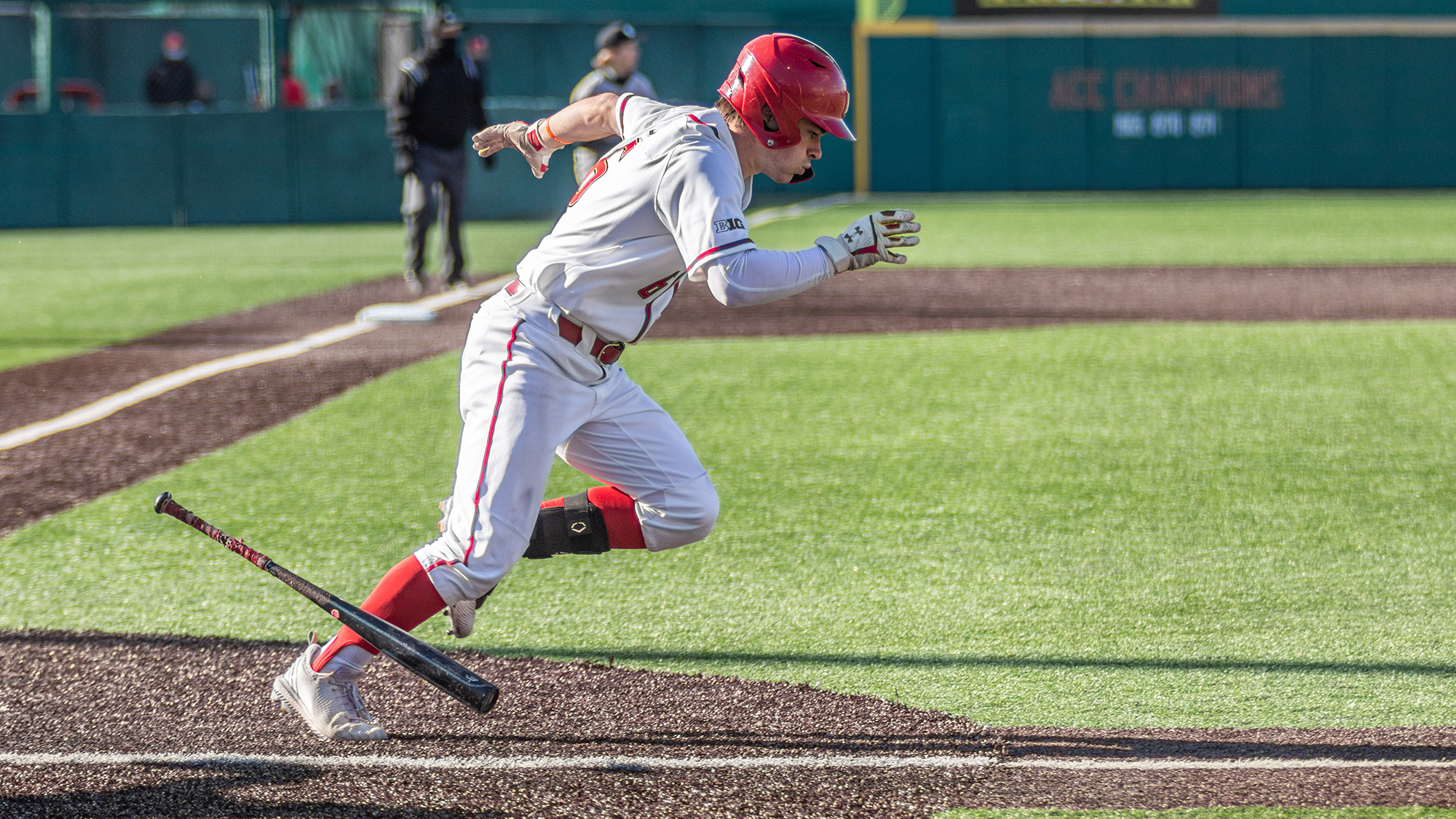 Then, he booked it.

With a triumphant dive and roll into home plate, Shaw scored the game-winning run for the Terps, who triumphed over Northwestern, 4-3, on Friday afternoon.

But to get to that point, Maryland had to weather a bumpy start, as right-hander Sean Burke seemed to be overthinking during the early innings.

With a formidable hitting group staring him down, Burke walked three batters in the first inning. None of the three even managed to take more than one strike.

And Burke paid for it. An error by Shaw meant the Terps were down 2-0 early. With the bases loaded and Northwestern threatening to pour it on, Burke crucially got out of the inning with a strikeout.

After an anxious first, Burke zoned in. Outside of a Wildcats solo home run in the second, the junior didn’t allow any more hits in the next three innings.

“Burke competed for us through five innings even with sporadic command and not his best stuff,” Vaughn said.

[Maryland baseball’s pitching staff will be tested against Northwestern, Michigan]

Unfortunately for Maryland, the Wildcats’ Mike Doherty seemed even more dialed in. Without Max Costes, the Terps would’ve had zero hits in the first four innings.

But the preseason All-American popped up when it mattered most, providing some production.

He knocked an RBI single in the fourth, and the Terps got on the board and made it 3-1.

“Baseball’s a funny game,” Maxwell Costes said. “Go a weekend hitless and then have a RBI on your first at-bat…it’s about keeping your mind process-based.”

Maryland didn’t have trouble making contact at the plate. It just couldn’t get the ball to drop where it needed it to — or a ball would just happen to speed straight towards a waiting Wildcats infielder.

Still, Burke saved the Terps through five innings. But his extended first caught up to him as he sat after throwing 106 pitches. Sean Heine came in relief.

With a reliever coming in, more pressure was waiting for Maryland at the plate. The Terps desperately needed to respond.

And partially thanks to one slippery fly ball, Maryland made its comeback.

After a pair of singles put two runners on for the Terps, Chris Alleyne made his way to the plate. A strong cut towards the pitch sent it drifting to the left field fence and with feet to go to the wall. A Wildcats fielder had it down and then miscalculated it as he fell fatefully to the grass.

And Maryland’s runners took off, seizing on the error.

What should’ve been the third out transformed into two runs scoring on an error, knotting the game at 3-3.

One sacrifice fly in the eighth later, and the Terps had their first lead of the day heading into the ninth. Sam Bello took the mound, looking to close things out. And he did so with aplomb, retiring the Wildcats in order to seal a vital Big Ten win.

So, what started as a frustrating day ended in delight. Maryland benefited from an error, but took advantage of its opportunity briskly.

And those kinds of wins — ones where runs aren’t the easiest to come by — are the kind that can swing momentum, especially in a tight season.

“Really good teams…they’re not afraid to come from behind,” Vaughn said. “Proud of the resiliency they showed today.”